(ORDO NEWS) — The triboelectric effect will allow the creation of implants that do not need to change batteries. The devices will be powered by electricity generated in the generator due to friction during normal breathing.

Brain implants are being used to help patients with Parkinson’s disease. They allow you to correct the abnormal activity of nerve cells using weak electrical impulses.

Hundreds of thousands of patients are fitted with such devices every year, and in the future there will be even more of them: experimental implants show good results in other disorders of the brain.

However, their energy consumption is quite high, and the built-in batteries last only for two or three years of operation. After this period, the operation has to be carried out again only to replace the battery.

Not surprisingly, scientists and physicians are looking for alternative options for providing implants that work in the brain.

Recently, such a concept was presented by a team from the University of Connecticut (USA). 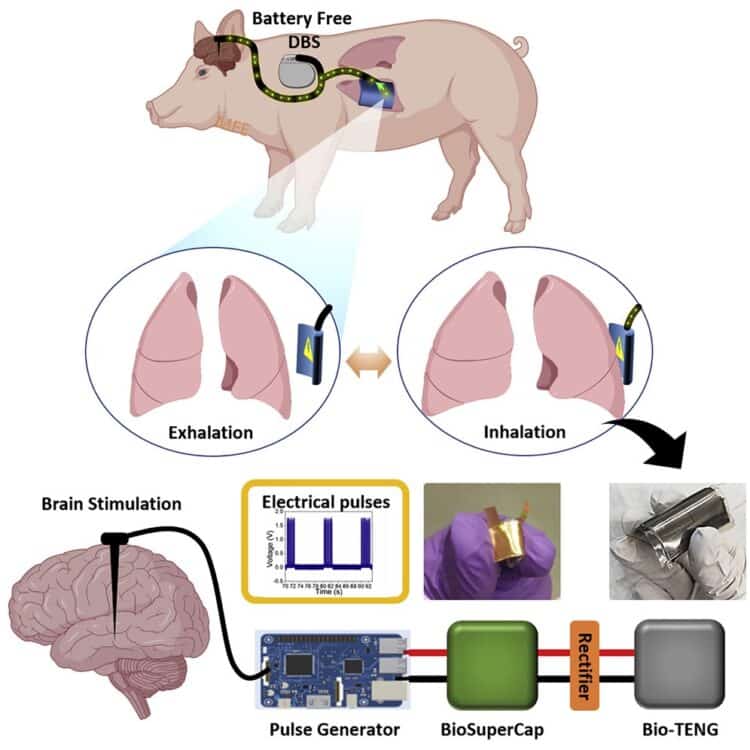 James Rusling and his colleagues relied on the triboelectric effect – the occurrence of charges in a material due to friction against another material.

The phenomenon is known from many popular experiments, including the electrification of a balloon when rubbed against hair.

The nanogenerator used in the new device works similarly. At the same time, he receives the movement for frictional contact due to natural movements during breathing.

A working nanogenerator accumulates a charge on an ionistor – an electrochemical capacitor, which, in turn, powers the operation of the implant.

“We tried to make everything compatible with existing technologies,” explained Esraa Elsanadidy, one of the authors of the work.

“Theoretically, if someone already has a brain stimulator installed, their battery can simply be replaced with this generator without implanting a new device.”

Indeed, if the electrodes of such implants go deep into the brain, then the control electronics and the battery are usually placed under the skin, in the form of a separate unit, relatively accessible to surgeons.

Scientists tested a similar system with a new generator in vivo by implanting the device in a pig. The operation was successful, and the triboelectric effect allowed the brain implant simulator to be powered: it gave out 60 electrical impulses per second, as is required for the correction of Parkinson’s disease.