(ORDO NEWS) — Scientists have conducted comprehensive studies of nematode roundworms. This allowed them to better understand the impact of microgravity in space on the impairment of the body’s locomotor functions.

People are increasingly flying into space – where there is no gravity. More specifically, astronauts are exposed to microgravity.

Short-term missions are not terrible, but long-term flights can already significantly affect the human body, which leads to the degradation of nerves and muscles.

The scientists studied the nematodes Caenorhabditis elegans, which exhibit molecular and physiological properties similar to those of humans. 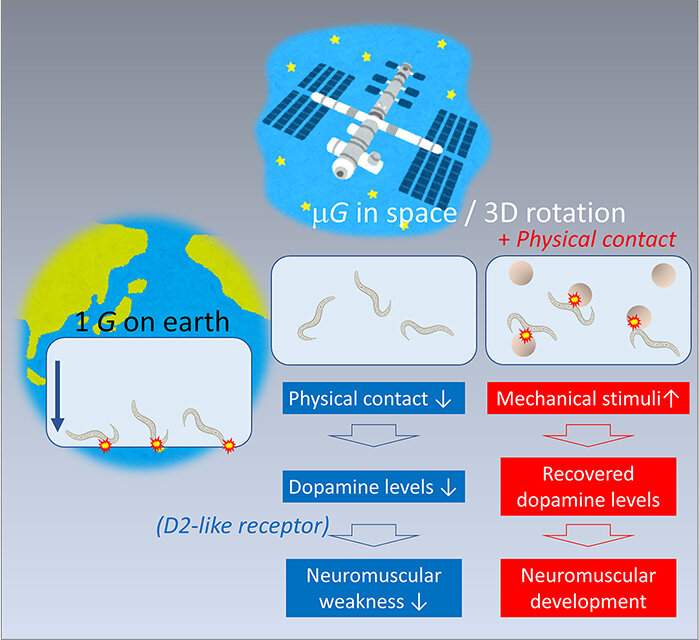 More about the study

Scientists investigated how microgravity conditions affect nematodes. For this purpose, observations were made both for animals that were in space, on board the ISS, and for nematodes that were on Earth. The focus was on two components:

It turned out that nematodes grown in microgravity had reduced levels of both important components. For example, dopamine was half that of the group that grew up on the surface of the Earth in normal gravity.

Therefore, the animals were rather lethargic and moved slowly. But when dopamine was introduced into the body of nematodes, their activity increased to a normal level. It also turned out that the level of calcium is reduced.

Another interesting observation was that dopamine and COMT-4 levels increased in animals when they re-established physical contact with, for example, the walls of a container.

The recovery of components occurred even in microgravity conditions. That is, an interdependence was revealed: the level of dopamine and COMT-4 can depend on physical contact with surfaces, which directly affects the increase or decrease in muscle activity.

This study will be another step that will help a person better adapt to space flight. Who knows, maybe in the near future it will be enough to give a few injections to prevent the consequences that microgravity conditions may entail.