US, WASHINGTON (ORDO NEWS) — NATO Secretary General Jens Stoltenberg praises American activity in Europe. He believes that by 2024, all NATO member countries, despite the huge opportunistic costs, are required to fulfill their obligations to invest 2% of GDP in the NATO budget. In his opinion, the main military danger now comes from Russia. 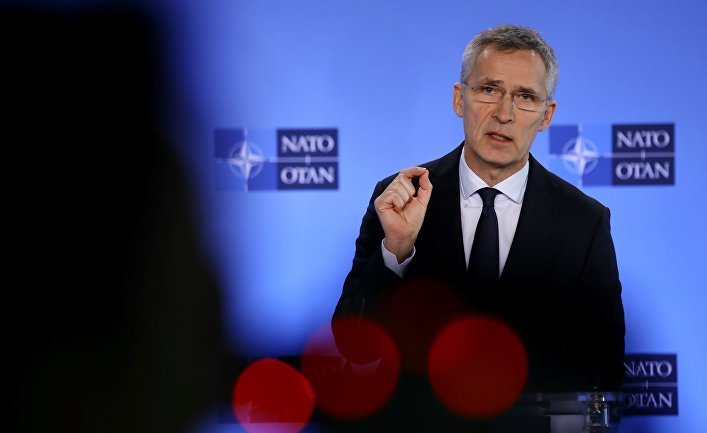 NATO Secretary General Jens Stoltenberg was at the Alliance headquarters radio station in Brussels. Due to the coronavirus pandemic, interviews were conducted over the telephone. Stoltenberg’s day is completely scheduled, so the conversation did not last a second longer than planned: exactly 30 minutes.

Welt: Mr. Stoltenberg, according to unconfirmed reports, Washington intends to withdraw from Germany 9.5 thousand soldiers from 34.5 thousand currently stationed there. The German government has not yet been informed. Do you know anything about this?

Jens Stoltenberg: On Monday I had a telephone conversation with President Trump – I conduct such telephone conversations regularly with all heads of state and the government of NATO member countries. This conversation was a continuation of the conversation that had already taken place, which dealt with the role of NATO in the Middle East and about the possibilities of strengthening the Iraqi armed forces in order to prevent the resurgence of ISIS *. Another topic of discussion was the NATO educational program in Afghanistan. As always, we talked about the military presence of Americans in Europe.

I will not comment on media reports. But in general, I can say that the military presence of Americans in Europe over the past decade has been consistent with the current situation. After the end of the Cold War, it declined, but in recent years the United States has once again strengthened its military presence, and not only in Germany.

For example, the Americans took control of NATO units in Poland, secured a presence in Romania and Norway, participated in the rotation of alliance units in the Baltic states and deploy ships equipped with anti-ballistic missile defense systems in Spain. In addition, we see that Americans conduct more exercises in Europe and are more represented in the air and at sea. Thus, they make a decisive contribution to European security.

– The major economic powers of Asia, such as India, Indonesia and the Philippines, are reviewing or even cutting back on defense spending due to the coronavirus crisis. Is a similar topic being discussed in NATO states?

– I see a decline in the situation in the member countries of the alliance and I know that they need to increase spending in many areas in order to compensate for this decline. But the problem is that the security threats and challenges that existed before the crisis did not decrease during the pandemic, but rather increased.

– What do you have in mind?

– Russia continues to arm itself, the global balance of power is shifting due to the strengthening of China, the ISIS terrorist organization is again actively trying to regain lost ground in Syria and Iraq. Therefore, we need to continue to invest enough funds in security.

– Is the task, according to which all the member states from 2024 to contribute 2% of GDP to the NATO budget, still relevant?

– This decision was unanimously adopted by all the leaders of NATO states and governments in 2014 and was once again confirmed at the Alliance summit in December 2019. Why? We live in a world that has become less secure.

– Of course, the covid-19 pandemic created big problems. Even before the pandemic, governments made every effort to address priorities in areas such as health, education and defense. All these topics are very important and difficult for politicians. Nevertheless, all NATO partners constantly reaffirmed their decision regarding a two percent contribution. The last time this happened during our meeting in London last December. Because peace and stability are the foundation of our well-being.

A stable economy is impossible without security. In addition, the help of military personnel during crises is very important. This is also shown by the crisis caused by the coronavirus: the military helped these weeks with the transportation of patients and medical equipment, the soldiers assisted with border control and the construction of mobile hospitals.
– Two weeks ago, the Council of Europe pointed out the danger that after a coronavirus, the use of biological weapons will become more likely. How is NATO preparing for this? Can a virus become an element of warfare in the future?

– First, we clarify: there is no evidence that coronavirus was created by man. But covid-19 demonstrates the potential dangers of using biological weapons. Of particular importance in this regard is the optimization of the exchange of information between special services. We must consider the possible use of biological weapons. And this proves how important it is to invest in the exploration of biological weapons and in the fight against them.

– Who can use such weapons?

– The danger can come from both public services and terrorists.

– Does NATO have information that Moscow and Beijing are trying to use the crisis with coronavirus in the military field?

– There have been numerous attempts to spread misinformation in order to sow discord among our countries. NATO allies have been accused of being responsible for a pandemic. Chilling reports came from Russia, according to which NATO troops in the Baltic states were massively infected with coronavirus, this is a pure lie. There was also a letter written on my behalf stating that the allies, including Germany, were withdrawing their rotated troops from Lithuania, which was also not true.

– According to the latest studies of the Swedish Institute for Security Policy, Russia has significantly increased its combat effectiveness. This is true?

– We do not see an immediate danger to any of our allies, including Germany. But we see that Russia is investing heavily in the modernization of the armed forces. These are medium-range missiles with nuclear warheads, such as 9M729, which can hit any target in Europe. These missiles are difficult to detect, the warning time for their approach is very short. They can fly to European capitals, including Berlin.

These missiles violate the treaty on medium-range missiles and became the reason for the denunciation of this treaty, which was of exceptional importance for European security. We regret that the process is developing in this way.

– Long-range missiles, air-based missiles, drones, powerful cyber weapons, as well as a new military doctrine. And the fact that Moscow no longer clearly divides the conduct of war with conventional and nuclear weapons. We have seen that Russia is ready to use military force against its neighbors – Ukraine and Georgia.

We have also seen that Russia is conducting serious cyber attacks. Germany recently confirmed that Russia is responsible for a cyber attack on the German Bundestag. Russia is active in the Arctic, strengthens its presence in the Mediterranean basin, its troops are located directly at the external borders of NATO. Therefore, we will have to invest in intimidation and defense in the future.

– Is it possible, in your opinion, that NATO will assist the EU maritime mission Irini, which monitors the arms embargo on Libya, despite the protests of Ankara?

– NATO and the EU have one goal: to support the UN in a peaceful and political solution to the crisis in Libya. The alliance supported Operation Sophia of the European Union; we are currently exploring how we can help the EU’s maritime mission, Irini.

– Could you tell us more about this? What could be this collaboration on the high seas?

“I think it’s too early to make assumptions about this.”

European equities up, but could show worst quarter since 2002

13 countries in Europe that weaken quarantine

European equities up, but could show worst quarter since 2002

13 countries in Europe that weaken quarantine