The countdown had to be stopped 20 seconds ahead of schedule due to another minor glitch. NASA recognized the event as a success, although it clarified that some goals could not be achieved.

Now the agency will have to decide whether the first mission of the Artemis program can be launched as is or whether it will have to conduct another final test.

The day after the “wet” dress rehearsal ( WDR , wet dress rehearsal , a full cycle of pre-launch countdown with refueling tanks, but without igniting the engines), the US National Aeronautics and Space Administration ( NASA ) held an online press conference.

According to the SpaceNews portal , quite curious and slightly strange statements were made at the event . In particular, the agency considers the key launch vehicle test a success.

However, it cannot decide whether it can be launched after that. It will take a few more days to discuss the issue at NASA , after which they will either finally announce the launch date of the Artemis-1 mission , or the timing of anotherWDR .

The problem again is insufficiently sealed lines for transporting cryogenic fuel components. This time, the pig was planted with a hydrogen drainage pipeline, which diverts gas from the rocket after the engines have cooled.

One of the connections, apparently, as a result of temperature deformations, lost its tightness. The leak was discovered during the refueling of the first stage, and the automation suspended the prelaunch process.

Engineers tried to remedy the situation by heating the joint and then allowing it to cool again. It was assumed that this would allow the seals to move slightly relative to each other and provide a better fit. However, the procedure did not help.

After a comprehensive assessment of the problem, the engineers decided to “cheat” the automation and continue the rehearsal. The leak posed no immediate danger to the entire event, and ignition of the engines was not expected by the test program.

There was one unpleasant nuance: when the control of the entire process on schedule passes from the ground infrastructure to the electronics on board the rocket, it will immediately stop the countdown.

But no one was going to change the program of on-board computers – it simply meant that WDR could not be completed to the end.

And so it happened: at the T-29 seconds mark (29 seconds before the expected separation from the launch pad), when control of all key operations passed to the rocket itself, the countdown stopped.

The SLS automation , like the ground infrastructure before it, noticed a leak in the drain and forbade further procedures. Nevertheless, NASA specialists were able to complete most of the WDR procedures , and they did not have any serious comments. 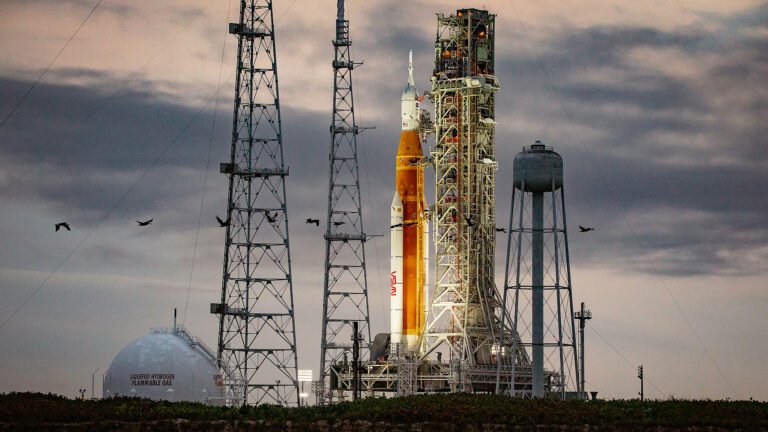 According to Artemis Mission Manager Mike Sarafin , the tests achieved 90% of their intended targets. But as for the specific outstanding tasks, he did not share the details. Although, in terms of flight readiness, the team believes that the necessary minimum checks were carried out with a margin.

Despite such an encouraging conclusion, the launch has not yet been officially scheduled. While NASA is going to evaluate in detail whether there is an urgent need for a second (or rather, the third in a row) dress rehearsal. The final decision is expected either before the end of this week or early next.

It is worth noting that, given the incredible technical complexity of the SLS and its payload, such frequent delays are inevitable.

Yes, from the outside it looks almost ridiculous, but for all the past successful and not very tests, the largest American state rocket (since the Saturn V ) shows itself well. Not a single critical design flaw or failure that could jeopardize the mission has ever been identified.

Recall that, taking into account all the delays, the nearest launch window for the first flight of the SLS under the Artemis program has shifted to August 2022. At the start of the program in 2010, it was planned that the rocket would fly for the first time in six years.

But that’s far from the only problem with NASA’s new lunar program . For example, spacesuits are still not ready for her – their development is years late , and with a billion dollars spent, there is no result, and recently the agency decided to outsource the task.

Nasa thinks what to do with his leaky spacesuits

Nasa thinks what to do with his leaky spacesuits