This vast, evolving phenomenon, called the South Atlantic Anomaly, has been of interest and concern to scientists for many years. The space agency’s satellites and spacecraft are particularly vulnerable to the weakening of the magnetic field inside the anomaly and, as a consequence, the impact of charged particles from the Sun.

The South Atlantic Anomaly (SAA), which NASA compares to a “dent” in Earth’s magnetic field or a kind of “pothole in space”, does not affect life on Earth, but the same cannot be said for orbital space. Space satellites (including the International Space Station) fly straight through the anomaly as they orbit the planet at low Earth orbit. 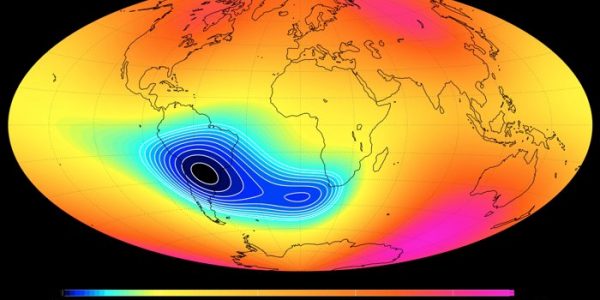 The reduced magnetic field strength within the anomaly means that technological systems aboard satellites could fail and fail if they are hit by high-energy protons emanating from the Sun.

Accidental proton hits can usually only cause low-level glitches, but they do carry the risk of causing significant data loss or even permanent damage to key components – threats that force satellite operators to regularly shut down spacecraft systems before a satellite enters the anomaly.

Eliminating these hazards in space is one of the reasons NASA is tracking the anomaly; the other is that the mystery of the anomaly is an excellent opportunity to investigate a complex and difficult to understand phenomenon, and NASA’s vast resources and research teams are well equipped to study the phenomenon.