(ORDO NEWS) — The search for traces of ancient life on the Red Planet is gaining momentum, as NASA’s Perseverance rover obtained some of the most curious samples containing organic matter.

It’s important to note that the presence of organic matter isn’t conclusive evidence that Mars was habitable in the distant past, but it’s clearly a promising argument and, perhaps most tellingly, NASA scientists seem uncharacteristically flustered.

Perseverance in search of life

Since July, Perseverance has been traversing a dry river delta in the 45-kilometer Jezero crater, which was known to have been a deep-water lake billions of years ago.

So far, the rover has been able to collect four “river samples” that NASA scientists say boast the highest concentration of organic matter since the rover landed on the planet and began its scientific activities.

What makes the samples so “informative” is the fact that they were collected from where the river entered the lake, bringing with it tons of sediment that was “packed” into separate layers. This makes the dry delta a stunning monument to Mars’ climatic history.

“The delta, with its diverse sedimentary rocks, contrasts beautifully with the magma crystallization igneous rocks that have been found at the bottom of the crater,” Kenneth Farley , a geochemist and one of the Perseverance Project researchers, told a press conference.

“This juxtaposition and diverse set of samples give us a deep understanding of the geological history of [Mars] after the formation of the crater.

For example, we found sandstone, including grains and fragments of rocks that were formed far from Lake Jezero Crater.”

Among the rocks sampled is a small rock formation dubbed Wildcat Ridge, believed to have formed at the bottom of the lake when it still existed.

In addition to two rock core samples, Perseverance chipped away a “ridge” of sedimentary rock and scanned the exposed interior with a SHERLOC spectrometer.

As a result of the analysis, SHERLOC found organic molecules associated with sulfates, and this probably means that as the lake dried up, there was a high concentration of both sulfates and organics in this particular area. 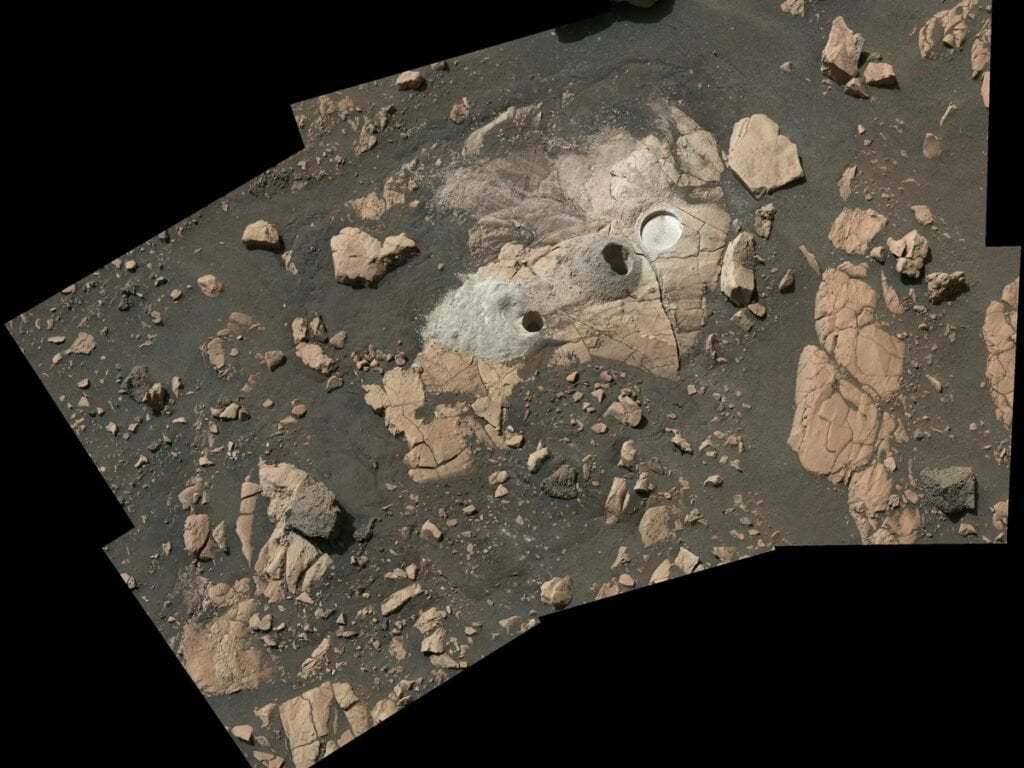 And when it comes to preserving organic matter, sulfates are king.

“On Earth, sulfate deposits are known to retain organic matter and may contain signs of life called biosignatures,” Sunandha Sharma, an astrobiologist at NASA’s Jet Propulsion Laboratory, explained at the conference.

“That makes these samples and this set of observations some of the most intriguing of the entire [Perseverance] mission, which partly satisfies the excitement the team felt as we approached the delta front.”

As exciting as all this sounds, it is still possible that the compounds are not the remnants of Martian life, but instead formed through chemical or geological processes.

It may take several years to get a final answer. As advanced as the Perseverance rover is, it is still not equipped with the scientific instruments necessary to announce the discovery of biosignatures without a shadow of a doubt.

Instead, scientists will have to wait until 2033 (or longer) for samples to be brought back to Earth as part of a joint mission between NASA and the European Space Agency. Until then, Perseverance will continue to relentlessly collect new samples and carry out preliminary analysis of the breed.

3,500 years ago, the city of Tell el-Hammam was destroyed by a mysterious explosion

3,500 years ago, the city of Tell el-Hammam was destroyed by a mysterious explosion