(ORDO NEWS) — The South Ring Nebula (NGC 3132), about 2000-2500 light-years from Earth, was one of the first scientific targets of NASA‘s James Webb Space Telescope.

The object is a planetary nebula that appeared as a result of the ejection of the outer shells of a red giant , which, having reached the end of its evolutionary path, turns into a white dwarf.

However, according to a new data analysis , that’s not all. Astronomers now believe that there are more players involved: there could be at least four stars hiding behind the structure we see.

One of the images (below) from James Webb shows a white dwarf and its companion star, but this, the researchers say, is only part of the real picture.

It is believed that the white dwarf is accompanied by two more stars.

“Technically we haven’t seen them [the other two stars], but we suspected their presence,” said Orsola de Marco, an astronomer at Macquarie University in Sydney and lead author of the study.

We “see” only the main star and the most distant companion – the one companion star that did not really play an active role in the formation of the nebula.

However, we are getting used to the fact that the stars “hunt in packs”!

A detailed analysis of the nebula in the near and mid-infrared suggests that a close companion of the white dwarf is currently hiding behind the disk of the central star.

Past interactions in this disk testify to the presence of this invisible star.

There are also “arches” inscribed in the nebula’s large molecular halo, which may be responsible for another hidden companion orbiting this close pair. 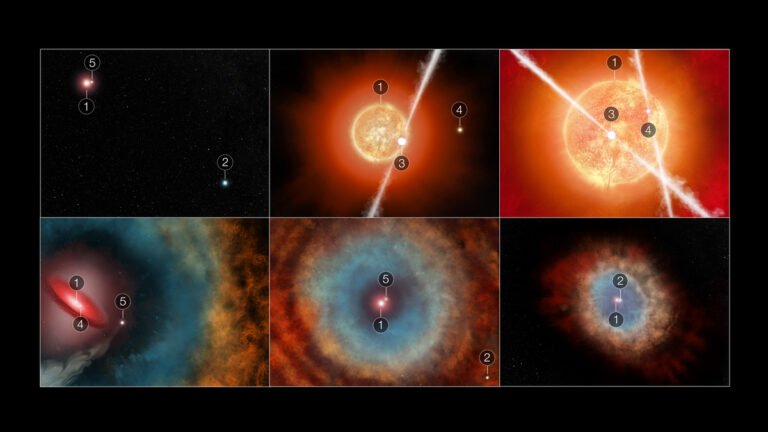 Now we know this for sure, so it’s not surprising that the central stars of planetary nebulae are also part of multiple systems.

As a star develops a massive star evolves into a red giant, it expands into the orbits of the companions, and interaction usually occurs.”

Detailed observations, combined with models, provide a clearer picture of the South Ring Nebula system, as well as an accurate estimate of the mass of the progenitor star: approximately 2.86 times the mass of our Sun.

These results could form the basis for future James Webb observations of planetary nebulae, as well as other complex systems such as supernovae and strong gravitational wave phenomena.