(ORDO NEWS) — NASA’s James Webb Space Telescope has provided the first clear evidence of carbon dioxide in the atmosphere of a planet outside the solar system.

This observation of the gas giant WASP-39 b orbiting the sun-like star WASP-39, about 700 light-years from Earth , provides important clues to the exoplanet’s composition and formation.

The discovery , which has been accepted for publication in the scientific journal Nature, clearly suggests that in the future, James Webb will be able to detect and measure the amount of carbon dioxide in the rarer atmospheres of small, rocky exoplanets.

WASP-39 b is a gas giant of the “hot Jupiter” class with a mass of about a quarter of the mass of Jupiter (about the same as that of Saturn), but at the same time its diameter is 1.3 times that of Jupiter.

Its extreme “bloat” is partly due to the high temperature of the atmosphere (about 900 degrees Celsius).

Unlike the cooler, more compact gas giants in our Solar System, WASP-39 b orbits very close to its star only about one-eighth the distance between the Sun and Mercury completing one revolution in just over four Earth days.

The discovery of WASP-39 b, which was announced in 2011, was made as part of the WASP project aimed at detecting exoplanets by the transit method.

In other words, the exoplanet WASP-39 b was detected at the moment of passing in front of the disk of the parent star, which led to a slight decrease in the brightness of the latter.

Previous observations with other telescopes, including NASA ‘s Hubble and Spitzer space telescopes , have revealed the presence of water vapor, sodium, and potassium in WASP-39 b’s atmosphere.

The unrivaled sensitivity of the James Webb to infrared radiation made it possible to detect the presence of carbon dioxide in the atmosphere of the studied exoplanet.

Transiting planets such as WASP-39 b, whose orbits we observe edge-on rather than from above, could provide scientists with ideal opportunities to study planetary atmospheres.

During the transit, one part of the starlight is completely blocked by the planet (causing a total dimming), while another part passes through the planet’s atmosphere.

Passing through the planet’s atmosphere, starlight experiences scattering over the entire spectrum and absorption in selected frequencies, after which absorption lines or bands appear in the planet’s spectrum, completely analogous to the telluric lines formed in the earth’s atmosphere.

Due to the combination of an inflated atmosphere and frequent transits, WASP-39 b is an ideal target for spectral analysis, which allows a very precise determination of the chemical composition of the atmosphere.

The research team used the James Webb Near Infrared Spectrograph (NIRSpec) to monitor WASP-39 b. In the resulting spectrum of an exoplanet’s atmosphere (below), a small “hill” measuring between 4.1 and 4.6 microns represents the first clear and undeniable evidence of carbon dioxide ever detected on a planet outside the solar system. 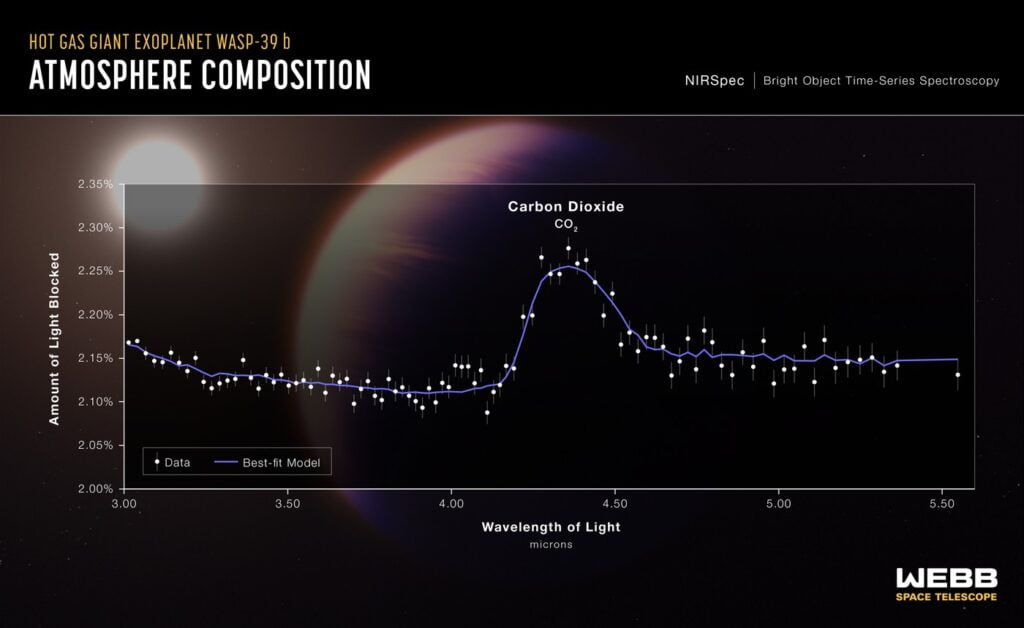 “As soon as the data appeared on my screen, I was taken by the colossal function of carbon dioxide,” said Zafar Rustamkulov, a graduate student at Johns Hopkins University and a member of the JWST Transiting Exoplanet Community Early Release research team that led the study.

“It was a special moment when we passed a major milestone in exoplanet science.”

No observatory has ever measured such subtle differences in the brightness of so many individual colors in the range of 3 to 5.5 microns (below) in an exoplanet’s transmission spectrum before.

Access to this portion of the spectrum is critical for detecting and measuring gases such as water vapor and methane, as well as carbon dioxide, which are thought to be present in the atmospheres of many exoplanets .

“The detection of such a clear carbon dioxide signal on WASP-39 b bodes well for a detailed study of atmospheres on smaller Earth-sized planets,” said Natalie Bataglia, professor of astronomy and astrophysics at the University of California, Santa Cruz, who led the study.

Understanding the composition of a planet’s atmosphere is important because it tells us something about the origin of the planet and how it evolved. 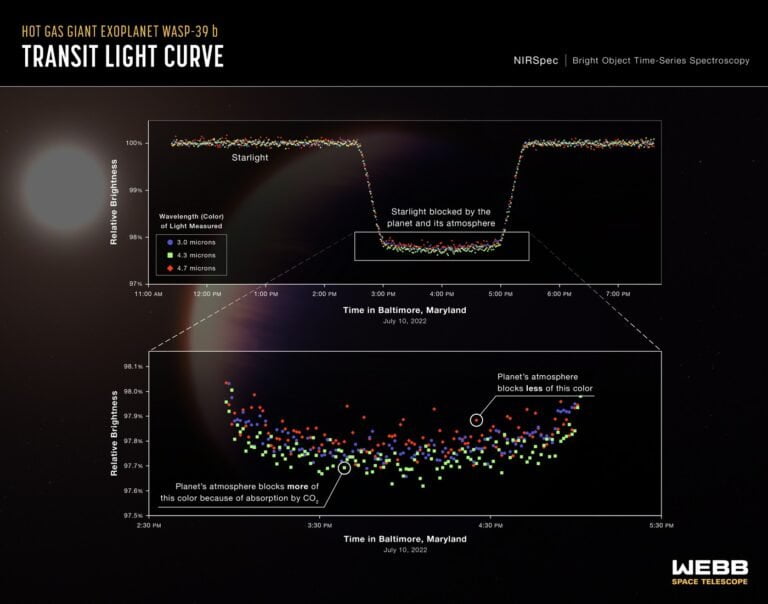 “By measuring the amount of carbon dioxide, we can determine how much solid and how much gaseous material was used to form this gas giant.

Over the next decade, JWST [James Webb] will measure many exo-pallets, which will provide insight into the details of how these worlds formed and the uniqueness of our solar system.”

The study of WASP-39 b’s atmosphere with NIRSpec is only part of a larger study that includes observations of the planet using several James Webb instruments, as well as observations of two other exoplanets discovered by the transit method.

James Webb is the most powerful space telescope in the history of mankind, which was created and launched to help us unravel the mysteries of the solar system, study worlds in the orbits of distant stars, explore the mysterious cosmic structures, the origin of the universe and our place in it.