(ORDO NEWS) — After years of exploring options, NASA has finally decided on how it wants to retire the International Space Station.

The space agency hopes to maintain the aging outpost until the end of 2030, according to a new statement. After that, the massive structure will descend into a remote area of ​​the Pacific Ocean known as Point Nemo.

NASA is selling the resignation as a “transition of operations to commercial services,” reiterating its focus on supporting public-private endeavors in Earth’s orbit.

In the official ISS transition plan sent to Congress, NASA detailed its plans for the final deorbit of the ISS. First, mission control will turn on the engines to slowly lower the station’s altitude. As soon as the station approaches Earth’s atmosphere, around January 2031, it will perform a final maneuver to land in the “South Pacific Uninhabited Zone (SPOUA)”.

This area of ​​Point Nemo is a popular place for space debris to fall, with more than 263 pieces dropped by countries since 1971.

“Not all visited vehicles can be used to assist in deorbiting,” the plan says. NASA and its partners have evaluated various numbers of Russian Progress spacecraft and have determined that three of them can deorbit.” NASA may also use Northrop Grumman’s Cygnus spacecraft to assist.

“The International Space Station is entering its third and most productive decade as a pioneering science platform in microgravity,” Robin Gateens, director of the International Space Station at NASA, said in a statement. “We look forward to maximizing the return on the space station through 2030 while planning the transition to commercial space destinations that follow.”

While the ISS may soon be retired, NASA is already looking to the future. The agency is working with commercial partners to attach docking modules to the station, and also hopes to build at least one in three commercial space stations with the help of private industry.

NASA also plans to send astronauts to the Moon long before the station is decommissioned. Under the transition plan, which sets the goal of deep space exploration by 2030, the agency hopes to use the ISS as a “similar to a transit mission to Mars.”

This will be the sad end of one of the largest international scientific cooperatives ever undertaken and may well mean the demise of the multinational approach to space research and exploration.

Both China and Russia, for example, hope to build their own space stations in the coming years. China, for example, has already sent astronauts to populate the first modules into orbit and plans to fully commission its station by the end of the year.

In the meantime, scientists will continue their invaluable work aboard the aging orbital outpost, from time to time filling literally the cracks that begin to form in the walls of the station.

Apollo equipment with “living insects” returned to Earth from the Moon

Apollo equipment with “living insects” returned to Earth from the Moon 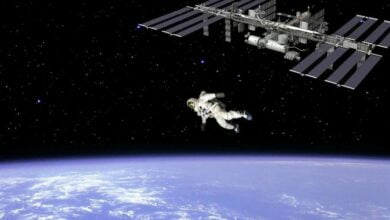