(ORDO NEWS) — The theory of paleocontact implies that sometime in ancient times, hundreds or thousands of years ago, aliens flew to our planet and came into contact with representatives of ancient earthly civilizations. These contacts had consequences, since the aliens taught people this or that knowledge, and also endowed them with unusual tools, metals, equipment for flying or moving on the ground.

Official science, of course, ridicules all this “nonsense”, but supporters of the theory of paleocontact are looking for and regularly find things that can claim to prove the presence of aliens in our past. 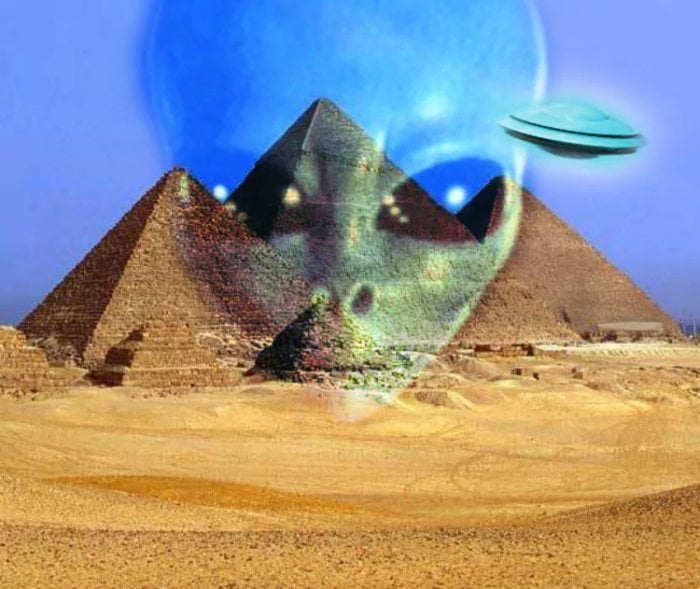 And with all the skepticism, you can always find a grain of reason in these theories. Below are some of the most unusual statements put forward by theorists in different years. Which of them are more truthful, you decide …

Jonah was not swallowed by a whale

In search of evidence of paleocontact, its adherents often turn to ancient religious texts, especially the Bible, finding there more and more new facts confirming their beliefs. According to them, many biblical stories are greatly distorted, but there is always some grain of truth in their origins, that is, they were based on something real. 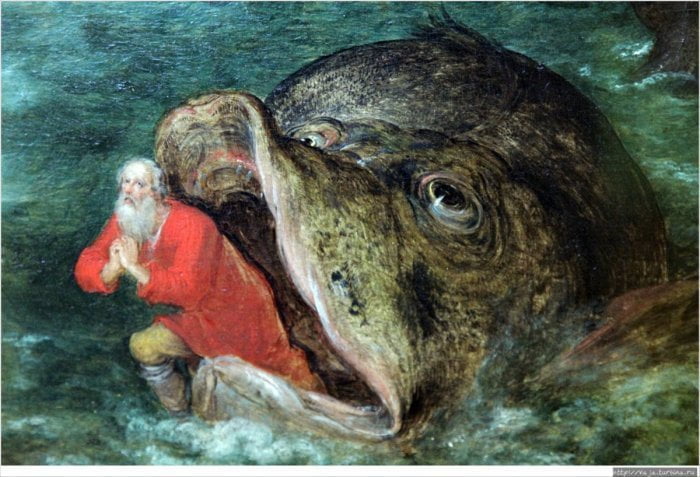 The story of the prophet Jonah, who was swallowed by a whale, and then ejected from his belly alive and well, is one of the strangest. Whales really can’t swallow humans, they have a very narrow throat, so they only eat small fish and krill.

Theoretically, a person can be swallowed by a sperm whale – a toothed whale, but there are very few such facts in history, and even where Jonah sailed, sperm whales are not found. Because of this, some believe that in fact no living creature swallowed the ion, but in fact it was taken aboard a UFO, that is, it was a victim of abduction (abduction by aliens). And after the aliens studied him, Jonah was returned back.

Space pilot seat on the lid of the Mayan coffin

In the 7th century AD, there was a Mayan city-state called Palenque and its ruler was Pacal. After his death, Pakal’s body was placed in an ornate stone sarcophagus with a heavy patterned lid and installed in the so-called Temple of the Inscriptions.

When in the twentieth century, archaeologists discovered this sarcophagus, they immediately turned their attention to the unusually decorated lid and then called it one of the most striking artifacts of Mayan art. 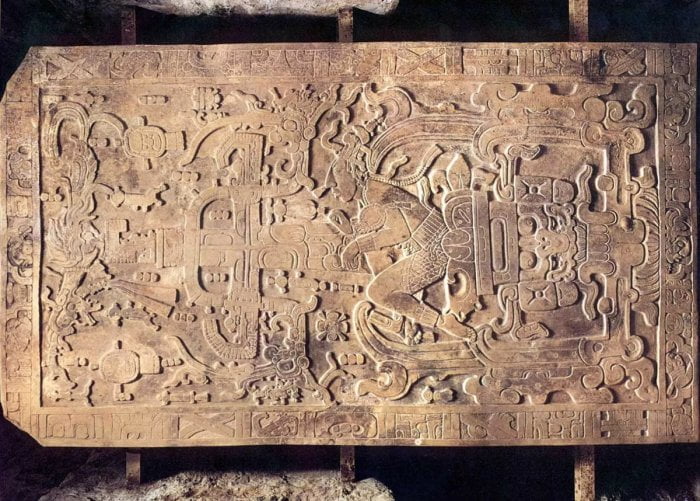 Later, Erich von Daniken turned his attention to this cover and looked at this drawing from a different point of view. According to him, if you look at the lid of the sarcophagus not from the narrower side, but from the wider one, then instead of a person sitting on a throne in a strange pose, we will see a certain technical device, probably a control panel, and with his own hands this person most likely presses on the devices or buttons on this remote.

That is, on the lid of the sarcophagus from Palenque, it is not the ruler of Pacal that is depicted, but a pilot in his place inside a space rocket or other vehicle.

In the myths of different nations, there is never a shortage of various monsters, some of which look completely surreal. 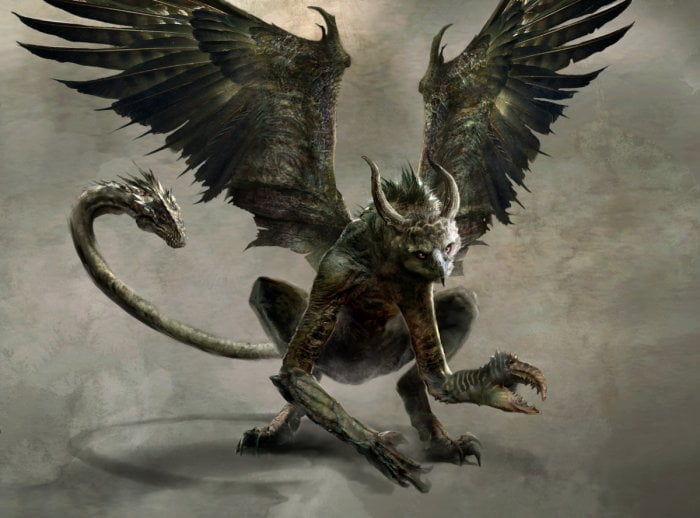 According to many adherents of the theory of paleocontact, all these monsters, completely alien to nature, actually existed in reality, and were not the result of human fantasy. And were created in the genetic laboratory of aliens. For what? Who knows, maybe the aliens were trying to create creatures that are more resistant to disease or injury.

There is also a version that a person himself is also the result of similar genetic experiments of aliens. Official science still does not know why the ancestors of the first people began to stand on two legs, why their hair disappeared, their brains began to grow, and so on.

Teotihuacan is a huge computer 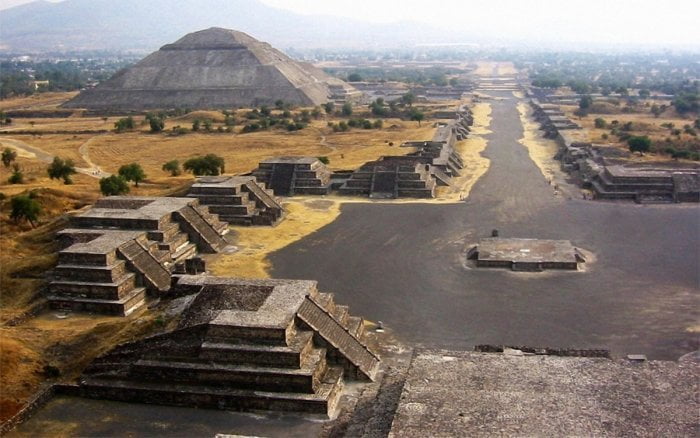 The city of Teotihuacan in Mexico is one of the largest and most ancient Indian cities in pre-Columbian America. Its original name is unknown, but it was built by the Aztec tribes. The flourishing of the city fell on 250-600 AD.
The city mainly consists of huge stone pyramidal structures, so archaeologists initially believed that it had only a cult significance. And if you look at the city from somewhere from above, then the geometrically correct structures do look like something like … computer boards.

Yes, some researchers believe that ancient Teotihuacan really was something like a computer, in any case, it was able to generate energy in its pyramids, and then redirect it to different needs. Theorists see evidence of this, including in stone blocks, in which mica, which is a dielectric, can be found everywhere. Some of the rooms in the temples were filled to capacity with mica.

The sword in the stone is a laser weapon

The story of the Sword in the Stone is a cornerstone in the Celtic legends of King Arthur. She is often known and remembered better than the legends of Merlin or the Knights of the Round Table. According to legend, who pulled out a sword from a stone became the king of Britain and could one only child do it – Arthur.

According to legend, Arthur twice pulled the sword out of the stone, including once in the presence of a large crowd of people, and also once thrust the sword back into the stone, and this was also easy for him. 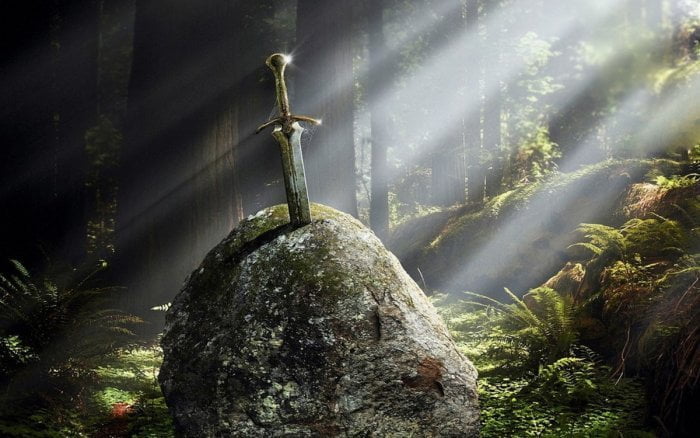 But with an ordinary sword it is impossible to do this. At the same time, the legend of such a thing goes far from the Middle Ages into the Bronze and even Iron Age. There are many theories about what such a story could actually be, but one of the most unusual versions was proposed in the program “Ancient Aliens”.

According to several theorists at once, Arthur’s sword easily went into and out of the stone, because it was not really a sword, but a high-tech laser or plasma weapon. And Arthur was not an ordinary person, but one who was specially trained to use this weapon, or he himself was an alien at all. That is why other people could not pull this “sword” out of the stone.

The image of the Grim Reaper is a plague-spreading alien

In the Middle Ages, deadly plague epidemics practically wiped out half of Europe. People did not understand what caused the disease and blamed demons, witches or even Jews for it. Modern science has long figured out that fleas living on rats are carriers of the plague bacillus, but the ufologist William Bramley put forward a version in which he accused aliens. 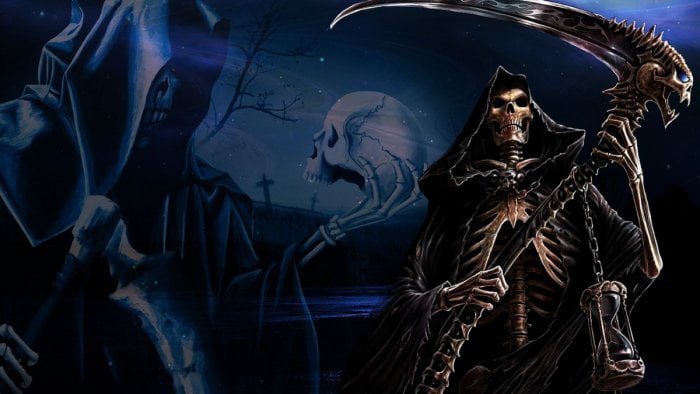 According to him, people were infected with the plague bacillus by means of mass “irrigation”, this is approximately how modern chemtrails (chemtrails) work. Just as farmers spray pesticides in their fields to kill pests, aliens did it to reduce the number of people overbearing.

Bramley also made an interesting remark, it was during the years when the plague epidemic was that the famous image of Grim Reaper (Grim Reaper) arose, which later transformed into the familiar image of Death and the scythe. This black-hooded Reaper was often seen in the wheat fields before the plague broke out in a particular city in the neighborhood. That is, it looked like the Reaper was infecting the wheat with something.

According to Bramley, it was the aliens who worked in the form of the Grim Reapers, who deliberately hid their appearance under wide black cloaks with a hood. True, why did they need to destroy people, it is not entirely clear, maybe they were just trying to destroy weaker people with poor immune systems?

Dinosaurs and ancient animals in the Bible

Dinosaurs and ancient animals in the Bible