(ORDO NEWS) — Yakumama means “Water Mother” and the locals say that this huge creature swims in the mouth of the Amazon River as well as in the nearby lagoons as it is its protective spirit.

Yakumama is a large snake, up to 60 meters long, said to live in the Amazon. Local shamans say that Yakumama travels to an area called the Boiling River.

According to local legends, Yakumama is considered the mother of all marine life, she has the ability to absorb any living creature that passes at a distance of 100 steps.

The locals blew the conch horn before entering the river, believing that hearing the noise would make the kite manifest itself if it was in the area.

Yakumama is one of the most legendary monsters living in the Amazon forests in South America.

This legend has also been heard in Paraguay, Argentina and Brazil, and in all these places people know Yakumama as the protector of water and that no one can escape her.

The natives said that Yakumama devours its prey and spits out giant splashes of water, thus destroying its victims.

Many fishermen with all their boats have disappeared, and others say they heard the noise trembling after his disappearance, as if Yakumama was pleased with his prey.

In the 1900s, two people on a boat went to throw explosives into the river in hopes of killing Yakumama.

After the explosion, the snake rose from the river, covered in blood, but not dead. The snake swam away, leaving the men terrified. 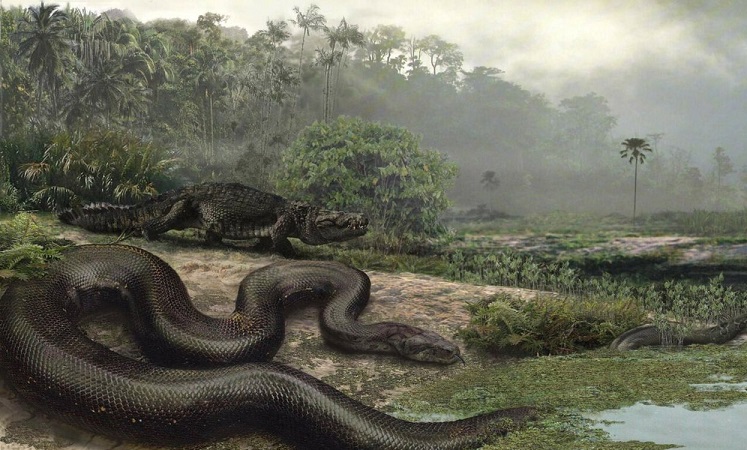 Some people believe that the creature is an extinct snake known as a titanoboa, a snake that has grown to about 12 meters, and some scientists suggest that it may have gotten bigger.

Scientists also believe that this snake could be poisonous. This theory is supported by the fact that fossils of this creature have been found with holes in them that could only be caused by a venomous bite.

Because of its size, it is likely that the titanoboa was, shall we say, a top-tier predator. Its diet likely consisted of any creature large enough to feed it, such as rodents, birds, and small mammals.

Research has also shown that Titanoboa may have been a water snake and that its fossils have only been found in wetlands.