All six bodies were excavated under the direction of Budge in 1896 from separate shallow sand graves in the ancient Egyptian desert city of Gebelein, about 25 miles (40 kilometers) south of Thebes.

Although ancient Egypt is known for its mummification practices, the six mummies from Gebelein are unique in that they are natural mummies dating from around 3400 BC, the late pre-dynastic period.

The artificial preservation of the dead was widely practiced in Egypt only from 2600-2100 BC. BC, during the late Old Kingdom.

However, there is now some evidence that resins and linen wraps were used to preserve the bodies of the dead as early as 3500 BC.

The Egyptian technique of natural mummy involved drying the body of the deceased under the hot sun on a sandy base until it was completely free of moisture.

Direct contact with hot, dry sand naturally dried and preserved the bodies of the Gebelein Man.

Two mummies from Gebelein were identified as male and one as female, while the sex of the other three could not be determined. 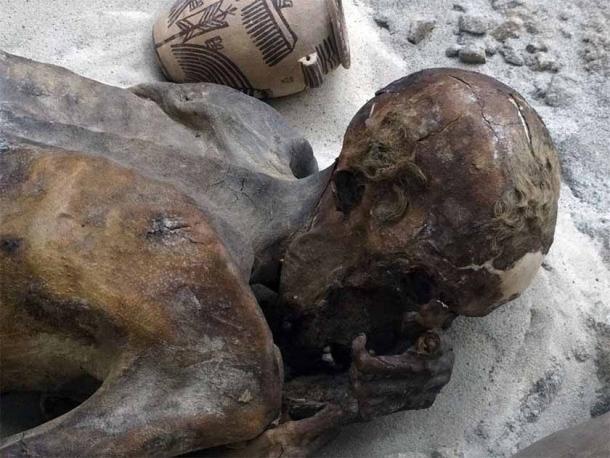 Of the six mummies of Gebelein, only the first excavated mummy has been on permanent display, except for maintenance, since 1901.

Although there was another male mummy in the Gebelein group, it is specimen EA 32751 that is commonly known as the Gebelein Man.

He was originally nicknamed Ginger because of the tufts of red hair preserved on his skull, but recent regulations for the ethical handling of human remains have forced that nickname to be abandoned.

The Hebelean Man was wrapped in mats and buried in the compressed, almost fetal position that was common in burials in Egypt until the mature period of the Late Kingdom, when bodies began to be buried fully extended.

Perhaps this change is due to religious reasons, but it is also possible that it was dictated by the development of artificial mummification, since the extended posture facilitated mummification.

The Gebelein Man is displayed in a display case that reconstructs the stone-lined sandy grave from which he was exhumed.

The exposition presents clay pots and bowls, as well as other items of grave goods, typical for burials of the pre-dynastic period.

However, they do not belong to the mummy graves from Gebelein, but are taken from similar graves from that period.

This is because although Budge recorded the discovery of pots and flints, his collection did not extend to these items.

The Gebelean Man was the first mummy from the pre-dynastic period to be displayed in the first Egyptian room of the British Museum.

In fact, the only other Gebelein mummy that is on public display from time to time is the only female in the group.

The corpse of the Gebelein Man was so well preserved that not only the features of his face and hair were still visible, but also a wound on the surface of the skin under the left shoulder blade.

But only after more than a hundred years, its sinister meaning was understood. 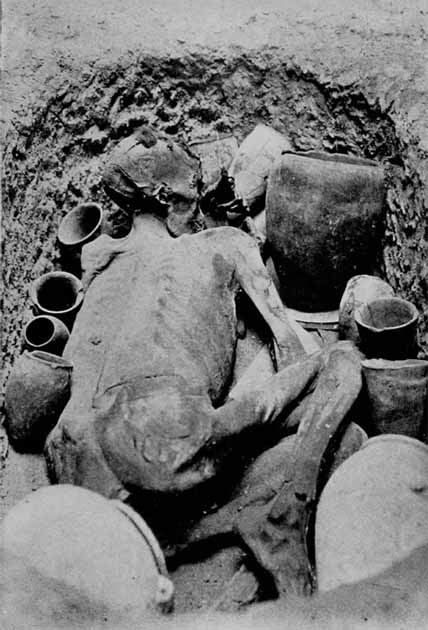 The advances of the 21st century in the field of forensic technology have made it possible to make another big breakthrough in understanding how the Gebelean man lived… and died.

For examination in 2012, Gebelein Man, who has rarely been moved since he was first exhibited in 1901, was carefully transferred to a blanket and taken by van to the nearby Bupa Cromwell Hospital.

Here, it was subjected to a high-resolution scan, with just 30 seconds of scanning providing enough data for a detailed study of its insides.

These data were then examined using a virtual dissection table. This technology, developed in Sweden, allows virtual rotation, enlargement and cross-sectioning of the skin.

Dr Daniel Antoine, the museum’s curator of physical anthropology, told the BBC in 2012: “There is a wound on the surface of his skin that people could see for the last 100 years, but it was only when we looked inside his body that we saw that the scapula was damaged and the rib under the scapula is also damaged.

All this speaks of a violent death.” In short, he died of murder.

A scan of Gebelein Mann’s skeleton showed that at the time of his death, he was a young, muscular man between the ages of 18 and 21.

Scans of the wound on the shoulder showed that it was a penetrating wound that went through the left shoulder blade and ribs and pierced the left lung.

The wound was considered fatal as it was severe and there was no sign of healing around the muscles and bones.

The skeleton showed no defensive damage, leading investigators to conclude that it was taken by surprise and died a quick death. Thus, he was probably killed by a killing stab in the back in peacetime.

The murder weapon had to be a pointed instrument that was either the point of a spear or a dagger. The most likely was a copper or silver dagger.

Almost its full length was driven into his back during the attack that caused his death. 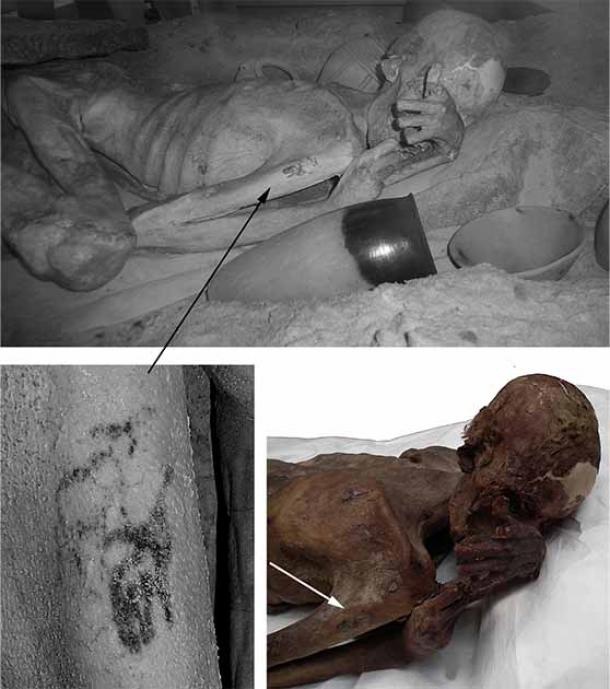 But the story didn’t end there. Gebelein Man had other surprises in store for explorers.

When the bodies of the Gebelein man and woman were reexamined as part of a conservation program in 2018, another unusual discovery was made.

Faint spots on the arms, which until now were considered insignificant, turned out to be tattoos in infrared scanning. This pushed back a thousand years the earliest evidence of this practice in Africa.

The man’s tattoos were also figured and represented two horned animals slightly superimposed on each other, presumably a wild bull with a long tail and impressive horns, and a Barbary ram with curved horns and humpbacked shoulders.

The woman’s tattoos were more abstract and difficult to interpret.

Until now, the only evidence of tattooing in pre-dynastic Egypt has been abstract tattoos engraved on female figurines, leading archaeologists to believe that tattooing women during this period was practiced as part of fertility rites.

But the man from Gebelein completely rewrote the earliest evidence of the practice to include male and curly tattoos.

The motifs tattooed on his upper arm have led researchers to speculate that the men of Pre-Dynasty Egypt may have been tattooed as symbols of masculinity and strength.

For over 125 years, the remains of the Gebelein Man have provided fascinating insights into pre-dynastic Egypt.

And now, thanks to modern science, we know that the Gebelein Man was attacked from behind by an unknown assassin nearly 5,400 years ago!