(ORDO NEWS) — Nuku Hiva is known as the largest island of French Polynesia in the Pacific Ocean. Apart from its history as the largest of the Marquesas Islands, it is especially famous for the stone monuments that dot its landscape.

Most of these stone monuments have been found at Temehea Tohua, a small settlement within Nuku Hiva. Archaeologists have determined that they belong to the period between the 11th and 14th centuries and are most likely images of the ancient deities of Nuku Khiva.

A deeper look at Nuku Hiva reveals an interesting and culturally rich history. The stone statues themselves tell archaeologists about deities that were worshiped by the locals – and in some areas they are still worshiped.

In addition, understanding the history of Nuku Hiva’s relationship with France also helps shed light on the cultural changes that have taken place over time.

Although the culture of Nuku Hiva has definitely changed over the past few hundred years, the existence of these stone monuments testifies to its ancient past and how far the people of Nuku Hiva have come since they entered the area several thousand years ago. 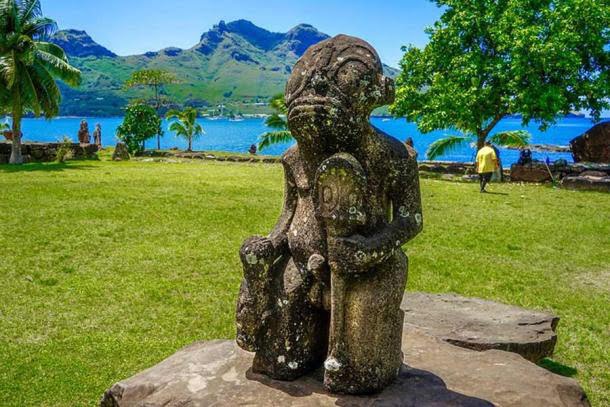 The people of Nuku Hiva often tell a legend about the origin of Nuku Hiva. According to them, the god of creation Ono once boasted to his wife that he wanted to build a beautiful house for her in one day.

To do this, he collected tons of earth and stone as building material and created from them the Marquesas Islands as her home.

According to historians, the Nukuhi people first arrived on the island about 2,000 years ago and originated from other places in Western Polynesia, such as Samoa.

In ancient times, Nuku Hiva was considered to be two separate provinces: Te L’i and Tai Pi. Nuku Hiva is believed to have had a population of around 100,000 during the period of initial settlement, making it difficult for some communities to live and eat normally.

Fishing has become one of the most common activities in the community in an attempt to gather enough food other than fruit to feed the population. With food shortages, there are rumors that cannibalism may have taken place on the islands in ancient times, but this has never been confirmed by historians.

Nuku Hiva existed in this form for many centuries, although several people visited it over the years, including Alvaro de Mendaña de Neira (Spanish explorer) in 1595 and James Cook (British navigator and explorer) in 1774, which helped draw attention to the island.

As knowledge of the island spread across Europe, commerce grew in the form of shipping, trade, and whaling.

It is this growing activity that is believed to have led to serious epidemics in the 18th and 19th centuries that wiped out over 90% of Nuku Hivan’s population.

After France took over the islands in 1842 and began to monitor the problem, in the early 1900s, French doctors came to the rescue of the declining population and provided local residents with vaccinations and access to better medical care, preventing the complete depletion of the population.

In 1946, France declared French Polynesia a French overseas territory, allowing it to have a territorial government assembly. This assembly allowed French Polynesia to elect representatives to both the National Assembly and the French Senate.

Although there have been no significant government changes since then, Nuku Hiva recently declared its desire to become independent from French Polynesia while remaining part of the French Republic.

Nuku Hiva leaders say this is because they do not want to lose relations with France if French Polynesia becomes independent in the future. 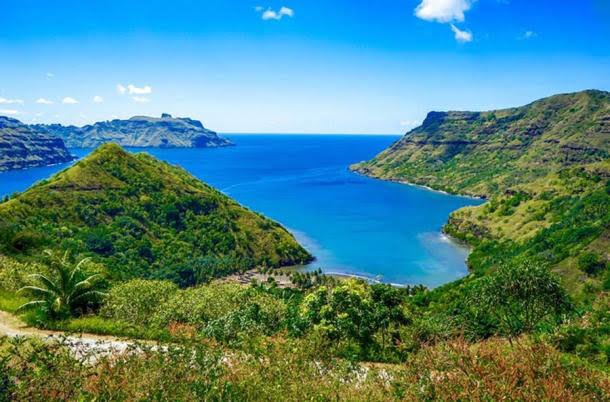 Nuku Hiva boasts a lush landscape filled with greenery, sandy coastline, bays and valleys. Each side of the island has its own unique topography, the northern side is known for its deep bays, while the east is home to most of the villages and boat piers.

The center of the island mainly consists of the To’ovi’I Plateau, a prairie plateau where the locals raise their livestock. A popular fresh water spot for locals, Waipo Falls is known as the tallest waterfall in Polynesia outside of Hawaii and New Zealand at 1,148 feet (350 meters)!

Historians believe that this population decline is most likely due to European diseases such as typhoid, which caused sickness and death in the original communities as commerce and tourism became more popular over the last few hundred years.

Records show that European epidemics have killed over 90% of Nuku Hivan’s original population since 1820.

The way of life of modern Nuku-Khiwans is largely focused on natural resources and a strong community. Their diet mainly consists of various fruits and vegetables that grow naturally on the island, including breadfruit, coconut, and taro.

They also have access to imported fruits and vegetables such as apples, celery, grapes and oranges. Rice is the most common grain consumed on the island, but wheat is also used to make French bread such as baguettes in some of the local bakeries.

Meat is available, but not as common: the inhabitants of Nuku Hiva mainly eat goat meat and fish. However, pork and beef have become more popular in recent years as some locals have taken up animal husbandry on the To’ovi’i plateau.

This shift in religion is likely due to European colonization as well as Christian missionary activity over the past few centuries. There are many churches on the island, the largest and most famous of which is the Cathedral of Our Lady of the Marquesas, located near the capital of Nuku Hiva, Taiohae. In the 1900s, archaeologists began to explore Nuku Hiva to learn more about its ancient roots. During these explorations and excavations, they discovered the famous stone monuments that are now scattered throughout the landscape of Nuku Hiva.

The discovery of these sites helped to confirm the early arrival of the Nukuhites from Western Polynesia around 150 BC, as well as to confirm that the main activity of the ancient Nukuhites was the manufacture of pottery and stone processing.

The ancient statues of Nuku Hivan are in remarkably fine condition considering they were most likely made around the 11th century.

The details of these statues are still clearly visible, there are almost no chips and cracks on the monuments, which testifies to the excellent quality and craftsmanship of the ancient Nuku-Khivans. They consist of a combination of red clay and volcanic rock, which are still found in large numbers on the island.

The monuments are depicted in different ways, but they all have similar features: large heads, huge eyes, short bodies and limbs. Some of them are carved with traditional clothes, while others have no clothes at all, possibly due to different artistic styles or weathering of the outer stone layer over time.

The largest ancient stone monument is named after the island. The 2.5 meters (8.2 ft) high statue of Nuku Hiva depicts one of these big-eyed people. Other statues are much lower and are sometimes found in groups.

The local term for these monuments is tiki, and each monument is known for serving a different purpose. Some serve for blessing and healing, others give wisdom in making decisions or mediation in love affairs. Others are considered protection creatures that help protect the island from invaders.

Ufologists, also known as UFO researchers, believe that these monuments are evidence of alien contact on Nuku Hiva due to their reptilian appearance and disproportionate bodies. They even claim that the clothes carved on the statues resemble space suits.

However, historians argue that it is much more likely that they simply represent a specific and prevalent art style at the time. This is confirmed by similar stone statues of the deity found throughout the world in dozens of other ancient cultures with similar proportions (statues of Tiki and Moai are other examples of such statues).

Although few locals still worship these statues due to conversion to Christianity, those who do say they will grant your wishes if you treat them with respect. 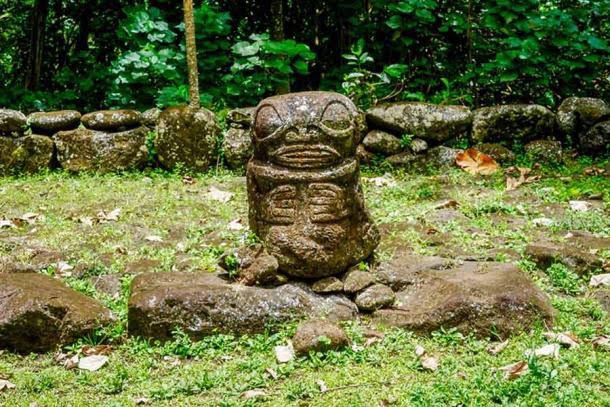 Excavations are ongoing throughout Nuku Hiva to help historians learn more about the island’s rich ancient culture. As new monuments are discovered, a clearer picture of Nuku Hiva’s origins is emerging.

In addition, Nuku Hiva actively supports the idea of ​​further preservation and protection of the finds made during the excavations, especially the ancient stone deities that have been found.

In 2021, the Marquesas Islands applied for inclusion in the list of UNESCO World Heritage Sites.

UNESCO, the United Nations Educational, Scientific and Cultural Organization, is known for its work in declaring various sites around the world as World Heritage Sites and providing resources to conserve and protect important historic sites.

Although the Marquesas Islands have been in talks for years to become a World Heritage Site, they are facing opposition from locals and politicians who say Polynesians don’t need help preserving their landscape.

They also cite the difficulty of accessing parts of the islands that are owned by Polynesian families who do not want state intervention in their lands.

Others argue that this is a move by France to secure the islands as part of France’s heritage, even though they existed long before France took control of them in the 19th century.

As such, further discussions are under way to reach a final decision on the resources that could be made available to the region if it were to be formally selected as a World Heritage Site.

Perhaps UNESCO will decide to direct its assistance to specific regions of the islands to help preserve the heritage, while respecting the choice of local residents who refuse their help.

They may also decide to make certain islands such as Nuku Hiva a UNESCO World Heritage Site but not others, although this will require serious political discussions.

Be that as it may, all parties agree that the stone monuments and other aspects of the culture of the Marquesas Islands can and must be safely preserved and protected for future generations. The value of these valuable and sometimes mysterious cultural monuments is too great to let them disappear.