(ORDO NEWS) — Balmoral has become a popular destination thanks to the latest news. This kind of estate in Aberdeenshire (Scotland) serves as the residence of the British royal family.

In fact, it was the place of seclusion of Elizabeth II. However, few people know that something unusual is hidden in it, for example, a pyramid.

The royal castle is located in a dense forest. It contains 11 stone mounds built by order of Queen Victoria. However, there is a monument here that certainly stands out from the rest of the buildings – this is a pyramid erected in memory of the death of her husband.

In 1852, Balmoral was bought by Prince Albert. It was a gift to his wife, Queen Victoria.

Despite the fact that the original residence was located on the territory unsuitable for the royal family, Prince Albert built a castle 100 meters from him.

After the work was completed in 1856, the old building was demolished and a stone was erected in memory of him where his front door had been.

It was customary for Queen Victoria to commemorate important events in her life with stones. She ordered the construction of a mound to commemorate her husband’s purchase of the property. In addition, she built other stones to celebrate the marriages of her 9 children.

After the death of Prince Albert, the Queen erected several monuments in his honor at Balmoral. The most important of these is the pyramid on top of a small hill. The massive 4-sided pyramidal structure was built from granite. Its dimensions are 12 meters at the base. 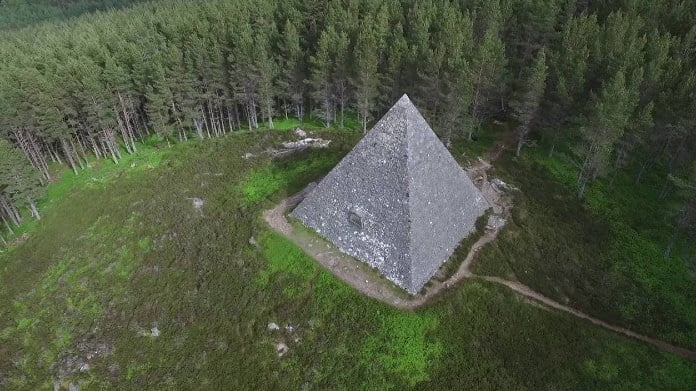 The inscription on the Pyramid reads: “To the beloved memory of Albert, the great and good Prince Consort. Erected by his grieving widow Victoria R. August 21, 1862.

Queen Victoria also erected a monument in honor of John Brown, her faithful servant. But later it was removed, as the eldest son Edward VII did not like it.

To commemorate the anniversary of the reign of Elizabeth II in 2012, 2 more mounds were built. The first was installed in the Scottish village of Ballater and consisted of 50 stones. One for each year of the monarch’s reign. The stones for the construction were mined in a local quarry in Inver.

A second “cairn” was laid at Balmoral Manor. It was topped with a stone found in the river, and when construction was completed, 10-year-old whiskey was doused on the last stone.

As you can see, building pyramids to honor departed royals is not just an ancient practice. This is a ritual that has been practiced for thousands of years and has given rise to all sorts of theories and hypotheses.