(ORDO NEWS) — Sometimes art and architecture challenge our ideas of what was once considered feasible and what our ancestors were capable of.

A perfect example of this is the abandoned megalithic capital of Nan Madol, located in a lagoon near the island of Pohnpei in the Federated States of Micronesia in the Pacific Ocean.

The ruined city is one of the greatest archaeological mysteries of modern times, sometimes referred to as “Atlantis”, the “eighth wonder of the world” or the “Venice of the Pacific”.

Few historical sites in the Pacific are as mysterious as Nan Madol. Located between the main island of Pohnpei and Temwen Island, it became the scene of human activity as early as the first or second century AD.

The construction of the islets began by the 8th or 9th century, and the development of the characteristic megalithic style began in 1180-1200 AD.

Nan Madol was the preeminent political and spiritual center of the Ponpe natives until it was abandoned. From 1200 to 1700, the city functioned as a religious center, a royal enclave, a stronghold, a city market, and the supreme governing body of Pohnpei. 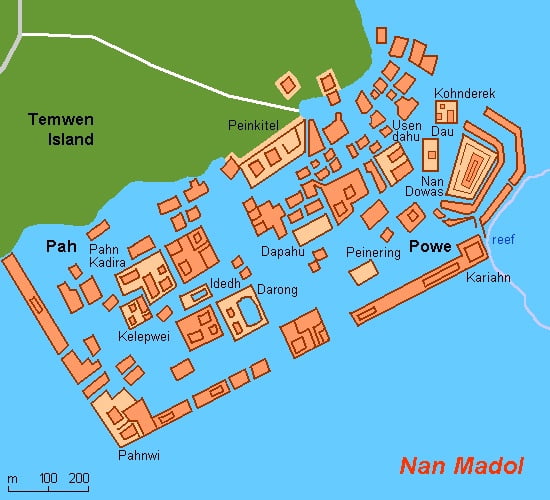 Nan Madol was the capital of the Saudeler dynasty, which in its heyday united all 25,000 inhabitants of Pohnpei. The Saudeleurs were a foreign tribe that arrived on Pohnpei and established themselves as the rulers of the island. Saudeleur appeared around 1100 and Nan Madol around 1200.

Pohnpei oral tradition says that Olisikhpa and Olosohpa, two brothers who traveled by canoe and built Nan Madol with the help of the gods, were the first Saudelers to land on the island.

The local Pohnpeans were so shocked by this event that they begged the Saudelers to join their tribe and marry Pohnpei women.

In the end, one of the brothers died, and the second proclaimed himself king. The Saudeleur built Nan Madol as a temple for the god of agriculture, Nahnison Sapwa, a god worshiped by the Saudeleur nobility.

What is surprising is the connection between this oral history, which has been passed down through the ages, and evidence unearthed during archaeological excavations in the region.

For example, oral traditions mention small channels cut into the islets, through which sacred snakes could enter from the sea to be worshiped by sacrificing captured sea turtles.

Subsequent excavations have found traces of both small channels and sacrificial turtles. 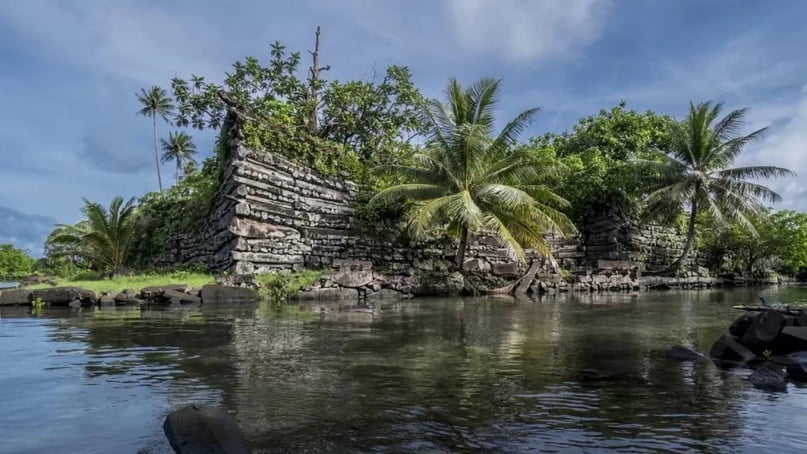 The city, built in a lagoon, consists of a series of small artificial islands connected by a network of canals. Nan Madol is the only surviving ancient city built on top of a coral reef.

Some call Nan Madol “the eighth wonder of the world”, while others call it the “Venice of the Pacific”. The reference to Venice is connected with the channels connecting 100 artificial islands of 200 acres (809371 meters) built of basalt and coral blocks.

The center of the stone-walled facility covers an area approximately 1.5 km long and 0.5 km wide and contains about 100 artificial islands – stone and coral platforms, fringed by tidal channels.

The basalt and coral stone structures were built from the 13th to the 17th centuries by less than 30,000 inhabitants (or maybe gods?), and their total weight is estimated at 750,000 metric tons. 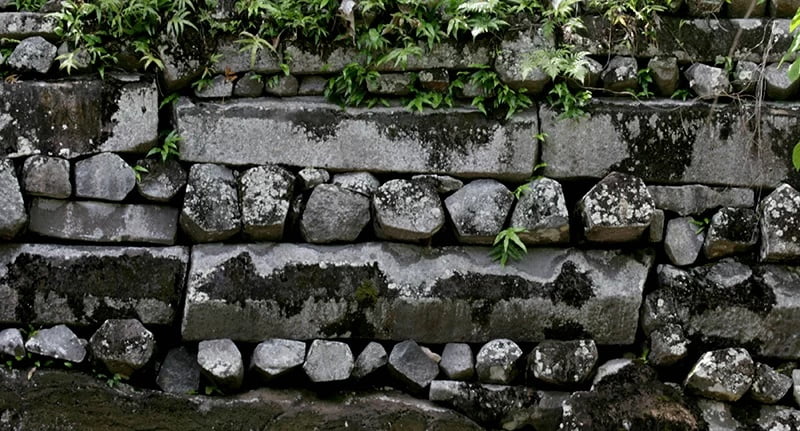 Archaeologist Rufino Mauricio helps us put these huge volumes into perspective by stating that for four centuries the people of Pohnpei transported an average of 1,850 tons of basalt each year, and no one knows exactly how they did it.

A natural coral foundation just below the surface of the water supports the structures. Nandauvas, the royal temple, surrounded by walls 8 meters high, is the largest building.

The Pohnpeans used an unknown method to move the massive rocks into the lagoon , as they did not have sophisticated diving equipment and bonding materials such as concrete.

The remnants of the buildings and canals are sufficiently resilient that even after centuries of abandonment, visitors can still take tours of Nan Madol by boat.

The entire complex of buildings is a worthy tribute to the advanced technologies used by its builders from Ponpe.

The scale and excellence of the stone architecture, the creation of an artificial island and the reshaping of the shoreline contribute to the site’s significance.

The Saudeler dynasty appears to have been deeply religious and sometimes violent . According to oral history, successive generations of Saudeler aristocrats became increasingly despotic, often causing the native people of Pohnpei to starve.

Isokelekel, a warrior hero, led an invasion of Pohnpei in 1628 and subjugated the Saudeler tribe. According to Ponpeian legend, Isokelekel was a demigod and the son of the Ponpeian storm deity Nan Sapwe , who was fed up with the tyranny of Nanison Sapwa and the Saudelers.

Historians say Isokelekel led a group of Micronesian settlers from the neighboring island of Kosrae. With the help of the oppressed Ponpeans, Isokelekel led his fighting force of warriors, women and children to victory.

Nan Madol’s importance to the people of Ponpe declined after the loss of Sandaler and it was finally abandoned in the 18th century.