(ORDO NEWS) — Since the monolith was discovered on the surface of the Earth’s satellite, the Moon, in the popular movie “A Space Odyssey of 2001”, which was filmed by Stanley Kubrick, there was no mysterious object that would baffle the best scientists around the world.

On Friday, a snapshot was posted on social media by the Utah patrol, which intrigued many users. A strange metal object is clearly visible on it. He was found at the time when the sheep were counted. If you believe the caption to the photo, then this item was found somewhere in the “wilderness” and found it quite by accident. 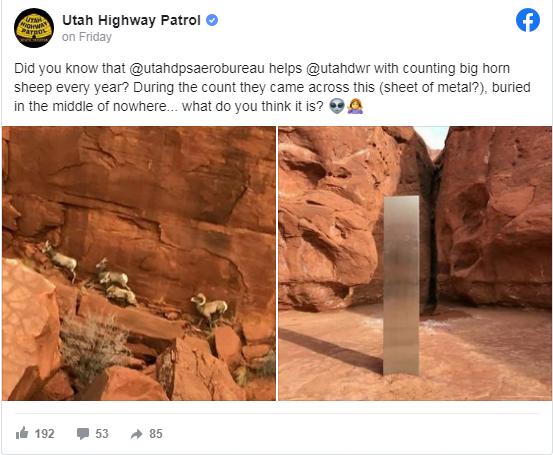 Users immediately began to put forward a variety of versions of what it might actually be and where it came from. Some users have suggested that he may have fallen off a UFO that was recently seen in Ogden. It is worth noting that there have been no official statements that an alien ship was seen in this area. But such a version may well be considered and such an option should not be ruled out.

But if you look closely, then, most likely, it may be just a piece of metal sheet that was buried in the ground. Perhaps in order to play someone. Experts do not comment on this case in any way and, judging by their behavior, they are not even going to figure out what they actually found in Utah. Therefore, users can put forward a variety of versions and, perhaps, one of the options will turn out to be correct.

One of the rivers in Israel suddenly turned blood red

The most mysterious mass extinction on Earth, was triggered by the destruction of the ozone layer

One of the rivers in Israel suddenly turned blood red

The most mysterious mass extinction on Earth, was triggered by the destruction of the ozone layer