(ORDO NEWS) — An orbiter flying over Mars has found strange marks on the surface with holes releasing gas.

The High-Resolution Imaging Experiment (HiRISE) camera aboard the Mars Reconnaissance Orbiter captured a mysterious phenomenon on the planet.

According to the University of Arizona, which operates the spacecraft in Martian orbit, the polygons are the result of water ice in the soil freezing and breaking apart. The edges of these structures crack in the spring when the surface ice turns to gas through sublimation. 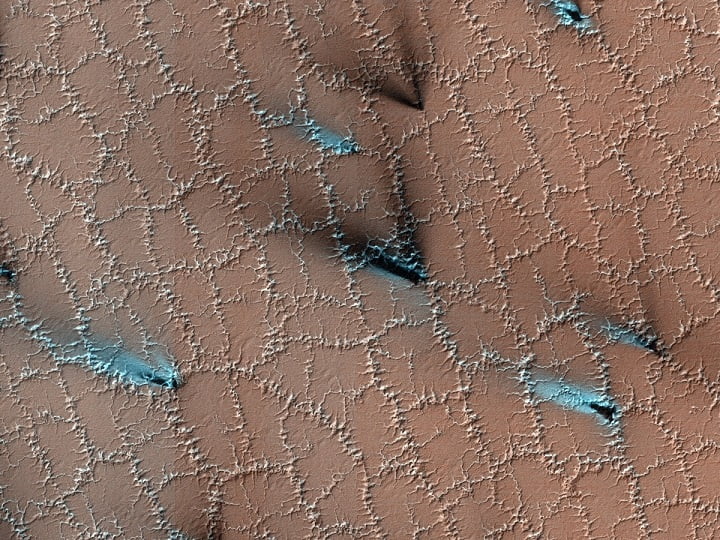 Experts also say that often the ‘vent’ closes and then reopens, producing two or more vortices coming from the same spot.

It should be noted that splashes and zigzags on the surface are one of the clearest signs of spring covering the planet at higher latitudes, when hidden reservoirs of underground ice come into contact with the dry surface of Mars.

A layer of translucent dry ice covering the surface forms holes that allow the gas to escape. This gas carries with it small particles of material from the surface, further destroying the channels.

The spacecraft also captured bright patches on the surface that show chloride deposits.
HiRISE is one of six instruments aboard the Mars Reconnaissance Orbiter, launched to the Red Planet in 2005.

The high-resolution camera capabilities remain unparalleled for any existing orbiter and are also an indispensable tool to help select landing sites for future exploration.