(ORDO NEWS) — This unusual primate is thought to be a cross between two other (remotely related) species.

A new study this week showed once again that the natural world still holds many surprises – even when it comes to such a well-documented and studied group of animals as primates.

The mysterious monkey, which was first discovered near the Kinabatangan River in Malaysian Borneo when it was still a baby, has left primatologists scratching their heads.

The prevailing theory is that this unusual specimen is a cross between a proboscis monkey and a silver langur (which are only distant relatives), a pair that has never been seen before, despite the fact that both species live in the same forest.

In fact, this is only the second case of intergeneric hybridization in wild primates, which makes this case particularly unusual. Although hybridization often leads to infertility, there is reason to believe that this individual – the female – is not only fertile, but may have already given birth to offspring.

However, the long-term consequences of such hybridization are still of concern to environmentalists.

“On its own, the sight of this putative hybrid does not pose a threat to the balance of an ecosystem or two species, but it is a worrying symptom of an ecosystem that appears to be out of balance,” said study co-author Nadine Ruppert from the University of Life Sciences in Malaysia.

Geneticists unravel the mystery of the appearance of the hairless monkey

The remains of a monkey were found in the “Burnt City

Geneticists unravel the mystery of the appearance of the hairless monkey

The remains of a monkey were found in the “Burnt City 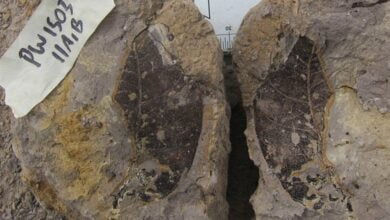