This startling discovery was recently announced by Professors Mahdi Alirezazadeh, Hamed Wahdatinasab and Abbas Moghaddam in an article published by the Iranian Scientific Archaeological Association.

“Thirteen deformed skulls have been excavated at this site so far, and these skulls are well preserved,” the archaeologists write.

These are not the first elongated human skulls found in Southwest Asia. The deformed skulls from Tol-e Chega Sofla bear similarities to other remains found, with all skulls dating from the Neolithic (10,000 to 4,500 BC) and Eneolithic (4,500 to 3,500 BC) periods. 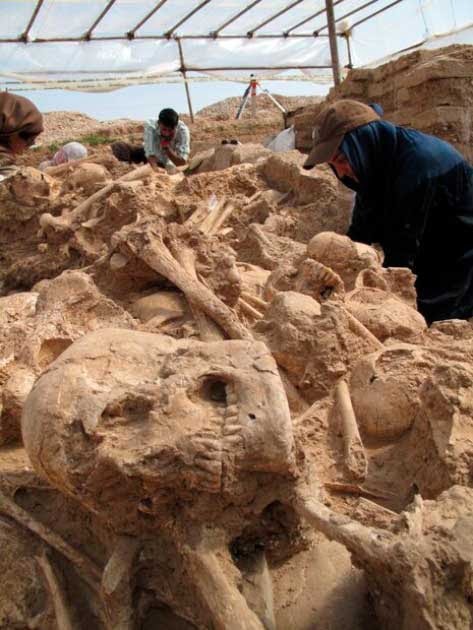 Such skulls fell out of the generally accepted norms of “official science”. Scientists needed to explain this somehow, and various theories were put forward. Soil pressure can create deformed skulls inside graves. In other cases, people may be born with similar deformities.

However, previous attempts to reject all deformed skulls as the result of natural forces looked so unconvincing that in the end the most “logical” reason was found – people deformed their skulls during their lifetime and did it intentionally.

The oldest examples of strange elongated skulls in this region were associated with the early Neolithic (10,000 to 8,000 BC) in southwestern Iran, indicating that they appeared very long ago.

The people with deformed skulls found at Tol-e Chega Sofla belonged to a larger group buried in 10 separate graves, in total about 100 skeletons were found in this section of the cemetery.

The age of these people ranged from six to 40 years old, most of them were from 30 to 35 years old. Men, women and children were buried together, without separation, implying no difference in status. Of the 13 found deformed skulls, 12 were in one of the ten mass graves.

Men and women were roughly equally represented in the deformed skull group, and their age ranged from 9 to 30 years for women and from 17 to 25 years for men. 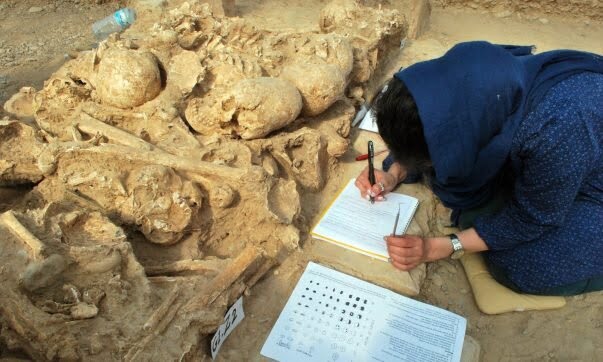 In the plain of Zohreh, 45 km south of the city of Behbahan in the eastern province of Khuzestan, is the settlement of Tol-e Chega Sofla and a cemetery. During excavations in this place, archaeologists found traces of life related to the period between 4700 and 3700 BC.

Much of what was found at the cemetery was discussed in a 2021 paper titled “The Tol-e Chega Sofla Cemetery: A Phenomenon in the Context of Late 5th Millennium Southwestern Iran”, co-authored by Iranian archaeologists Negin Miri and Abbas Moghaddam.

The latter also participated in the latest discovery of deformed skulls, and this remarkable find sheds even more light on the history of the ancient peoples of the region.

Overall, the evidence collected during the excavations at Tol-e Chega Sofla has revealed many interesting details about the prehistoric way of life in the Greater Susiana region.

These details became known mainly through the study of the cemetery with its numerous tombs and structures, a diverse collection of grave goods and the skeletal remains of people who lived at that distant time.

“The finds from Tol-e Chega Sofla not only remind us not to underestimate prehistoric communities,” write the authors of an article published in 2021, “but also demonstrate the need to reconsider many of our previous assumptions.” Of the 13 deformed skulls, 12 were found in this mass grave in a cemetery that “strangely” turned out to be too large for the tiny nearby Neolithic settlement.

The residential part of Tol-e Chega Sofla was not extensive and occupied only 20 hectares. Therefore, the number of people living there at the same time must have been relatively small.

The residential area contains five burial mounds of various sizes, with the tallest one reaching almost 30 meters above the surrounding landscape.

On the other hand, the cemetery located next to the settlement is striking in its size. It has the shape of a rectangle and covers an area of ​​approximately 800 by 2000 meters.

Its sheer size suggests that the Tol-e Chega Sofla cemetery was used for several generations, or that it was chosen as a burial site for peoples who lived elsewhere than just this particular site.

In addition to skeletons with deformed skulls, many finely worked and carefully made grave items were found in 10 excavated mass graves.

Among the finds are painted ceramic bowls, jugs and bowls, stone vessels of various sizes, an assortment of metal objects and vessels, and many small ornaments and personal items.

These various objects were decorated with a wide variety of designs, including geometric signs, images of snakes and other reptiles, and much, much more.

Currently, Tol-e Chega Sofla is included in the tentative list of UNESCO World Heritage Sites. This means that it has not yet been nominated for World Heritage status, but is likely to be nominated in the not too distant future.

The discovery of unusual, deformed skulls will only strengthen the position of the object, as this discovery shows that Tol-e Chega Sofla has a rich history that goes far into antiquity, and many historical mysteries are still waiting in the wings.