(ORDO NEWS) — Using the LOw Frequency ARray (LOFAR) and the Very Large Array (VLA), European astronomers have investigated a mysterious diffuse synchrotron source in the galaxy cluster Abell 523. Results of the study, published January 28 on the arXiv pre-print server, shed more light on the nature of this peculiar source.

At a redshift of about 0.1, Abell 523 (or A523) is a nearby galaxy cluster with an estimated mass of around 220 to 360 trillion solar masses. It is a disturbed system with an ongoing merger (interacting with a more compact cluster), showcases an irregular shape and lacks a dominant galaxy.

Previous observations have found that A523 hosts an extended diffuse synchrotron source associated with the intracluster medium (ICM) and classified as a radio halo. The source has a radio power at 1.4 GHz of 2.2 YW/Hz, while its X-ray luminosity is estimated to be about 150 tredecillion erg/s.

However, the diﬀuse synchrotron source in A523 exhibits a morphology that is diﬀerent and oﬀset from the thermal gas, and has a polarized emission at 1.4 GHz typically diﬃcult to observe in radio haloes. A team of astronomers led by Valentina Vacca of the Cagliari Observatory in Italy has now conducted LOFAR (at 120-168 MHz) and VLA (in the frequency range 1-2 GHz) observations of this source, hoping to determine its true nature.

“We present new observations obtained with the LOw Frequency ARray at 120-168 MHz and the Jansky Very Large Array at 1-2 GHz, which allow us to study the spectral index distribution of this source,” the researchers wrote in the paper.

The observations found that the studied source is more extended at 144 MHz than what was previously observed at 1.4 GHz, with a total size of about 5.87 million light years. The total ﬂux density of this source at 144 MHz was measured to be 1.52 Jy.

According to the study, the diﬀuse synchrotron source in A523 showcases a complex morphology as it consists of three bright ﬁlaments—two in the north of the system and a third one developing from the bright northern structure to the south of the cluster. Moreover, additional regions of faint emission and a bright diﬀuse synchrotron patch were identified, characterized by a steep spectral index and of unclear origin.

All in all, the new findings suggest that the observed source in A523 may be an overlapping of diﬀerent structures, powered by the turbulence associated with the primary and a possible secondary merger in the galaxy cluster. However, the authors of the paper noted that additional optical and X-rays observations are necessary in order to verify this hypothesis. 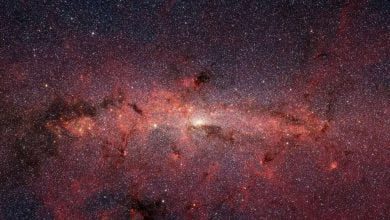 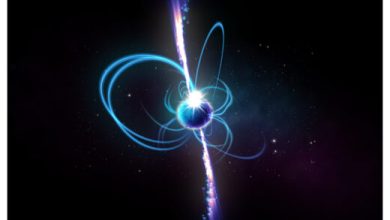