(ORDO NEWS) — This beautiful necklace and pectoral are currently on display at the National Museum of Georgia.

Both items were found in a pit dug in the floor of a tomb in mound 2 of Ananauri (Kakheti), dated to the second half of the 3rd millennium BC. (Early Bronze Age IV / Middle Bronze Age I (2500-2000 BC).

The imposing pectoral has the shape of a double helix, decorated with intricate filigree carvings. Smaller double helix pendants twisted from gold wire are accompanied by biconical and tubular beads.

Bobbin-shaped beads are comparable to those from the Markopi 4 burial mound and the burials of the Early Dynastic period A in the royal ceremony at Ur.

The Roman author Strabo and others have suggested that the Golden Fleece was inspired by actual mining practices in Colchis.

1.2.39. It is believed that Aeet reigned in Colchis; this name is still common throughout the country; legends about the sorceress Medea still exist; the riches of the country in gold, silver and iron confirm the motive of Jason’s expedition, as well as the expedition of Phrixus.

11.2.19. In their country the winter streams are said to bring even gold, which the barbarians collect in troughs with holes and line them with skins (fleece); hence the legend of the golden fleece.

The use of sheepskins to trap heavy gold particles by placing them in streams is a method that has been reported in the region even in recent ethnographic accounts.

The story can be interpreted as follows: The sacred ram, whose fleece Jason sought, refers to the Tibareni, or sons of Tubal, whose name means “hammer”, since Tubal was a blacksmith – the first of a noble and numerous family. The Tibarens were a gold-mining tribe off the northern coast of Asia Minor.

They washed the gravel of the gold-bearing stream in troughs, at the bottom of which sheepskins were placed to trap fine gold.

When it came time for refining, they removed the skins, shook out the larger pieces of metal, and hung the fleece to dry so that fine gold could be beaten out of it and preserved.

So the Greek sailors learned about the land in which the golden fleece hung on trees in a sacred grove near the Euxine Sea.

Jason is a type of youth, a seeker who goes with his comrades across the sea in search of gold. He discovers that he must do a monstrous work before he can mine the precious metal.

He is aided in his extraction by the sorceress Science, a modern-day Medea, who shows him how to use the fleece to trap fine gold in the Colchis bed, and even explains to him that the natural lubricant on the wool promotes the cohesion of the gold particles.

The oldest well-documented gold mine, dating from c. 3000 BC, was found in Sakdrisi in the South Caucasus. Sakdrisi was declared a cultural heritage site, and archaeological and scientific excavations began in 2004.

In 2013, this status was revoked by the Georgian Ministry of Culture and Monuments to allow RMG Gold, a Russian mining company, to develop the site for the remaining gold.

Excavations by a German-Georgian team that began in 2004 revealed that ancient miners used a complex labor-intensive process to extract gold from hard gold-quartz veins that were up to 25 meters deep.

Masses of hammer stones collected from dumps, as well as from underground workings, testify to the extensive prehistoric mining.

Kura-Araks ceramics, as well as charcoal from bonfires and lighting, were found in the backfills left in the ancient workings. Ancient mining activities cover the period from the second half of the 4th to the middle of the 3rd millennium BC.

By the middle of the III millennium BC. gold appears in increasing quantities around the same time that people in the South Caucasus began to adopt a new way of life.

Numerous early Bronze Age villages and settlements were largely abandoned, and most scholars believe that mobile pastoral patterns of life best characterize the period between 2500-1500 BC. BC.

In the central part of the South Caucasus, in Eastern Georgia, rich burials were found under large mounds. Two groups were singled out – Martkopi and Bedeni.

The appearance of burials under mounds is associated with the activities of nomadic groups from the Eurasian steppes: in the third millennium BC, when peoples from the steppes of the north began to penetrate with varying degrees of intensity into the agricultural cultures of Central Asia, the South Caucasus and the Balkans.

The emphasis on the construction of large burials for the elite means a major shift: the growth of inequality and the development of social hierarchy. 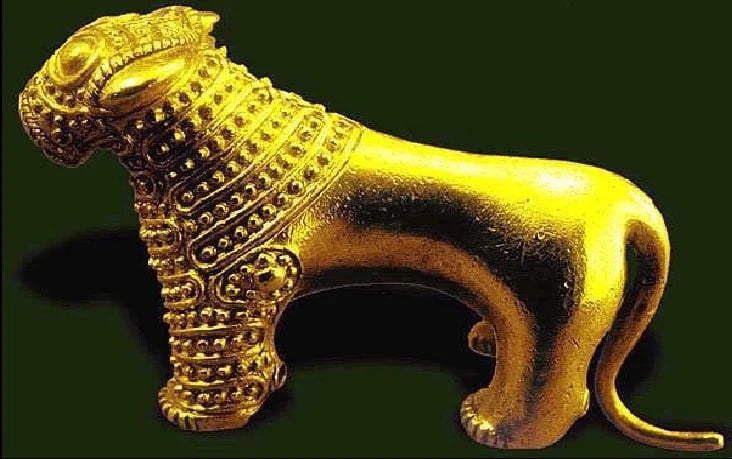 The emergence of these new peoples led to significant transformations of the local culture, although there was no mass migration. Most likely, it was about small groups that took control of the military and political spheres, while local traditions of material culture were preserved.

So far, little attention has been paid to this period of ancient bronze mounds. In Georgia, some remains were excavated in the 1960s and 1980s and have been interpreted in various ways.

During this period, artisans perfected their metallurgical skills, including techniques such as granulation and filigree.

Granulation is the process of covering a surface with tiny beads for a shimmering or sparkling effect, while filigree involves the use of fine, delicate wire as a decorative technique.

Figured pieces of sheet gold indicate that it was used to gild organic materials, possibly woodwork. There is even evidence of gold casting in the form of a lion figurine from a burial mound in Eastern Georgia.

The synthesis of the available information about Bronze Age and Iron Age gold in the Caucasus raises many questions. Why did the societies in the Kura River valley stop using gold?

Did they lose access to gold resources, either because the mines were depleted, or because of the destruction of the trade routes that brought gold from other places?

Or did people themselves decide to abandon the use of gold, which led to the abandonment of this technology?

No one expects the mythical chronology (Jason and the Golden Fleece) to perfectly correlate with the archaeological record, and there is plenty of evidence for the golden wealth of Colchis at the time the Greeks recorded these myths.

However, in a broader sense, there is something paradoxical in the fact that a society develops a complex tradition of gold metallurgy, and then apparently abandons it .

This “golden gap” suggests a case of “technological discontinuance” – a situation where a technology is no longer used after a period of implementation.

Archeology shows that innovation and technological change do not follow a progressive linear sequence from simple to complex, or from less useful to more useful. People are complex.

The choices we make about the technologies we use are determined by social context as much as any “objective” measure of their effectiveness.

The archaeological record is full of examples of new technologies not being adopted, or cases where the consequences of an innovation have little to do with the original reasons for adopting it.

At the same time, the nature of the archaeological record makes it difficult to analyze termination and abandonment.

The processes of burial and deposition mean that the items we find are not a perfect representation of those used by society.

Does the lack of technology mean that it has been lost or discarded, or simply that we cannot “see” it in the records of that time?

As a result, rejection, especially after a period of acceptance, is not well studied. Potential technology discontinuation cases are interesting because they allow us to understand why people decide to use (or not use) existing technologies and to tell us about the factors that may influence those decisions.

Surprisingly, however, the areas further south, including the Araks valley and adjacent highlands, maintained a relatively stable tradition of gold metallurgy during the Late Bronze and Early Iron Ages.

This pattern of technological survival is even more puzzling given that many aspects of material culture in the Araks region, including pottery, fortresses, and non-gold metalwork, are shared with neighbors to the north who have abandoned gold.