(ORDO NEWS) — The spreading of lithospheric plates reached its maximum speed millions of years ago, and now for some reason it is slowing down, which can reduce the release of greenhouse gases from volcanoes into the atmosphere.

The earth’s crust is composed of massive solid plates that move slowly over the surface of the semi-liquid mantle. Over billions of years, plates can connect and split, appear and disappear, go into the depths of the mantle, and be born.

New crust is formed mainly in the oceans, along mid-ocean ridges. Magma is squeezed out to the bottom here and solidifies, pushing neighboring plates apart, a process called spreading. And on the far periphery, the oceanic crust again goes under the thick plates of the continents in the process of subduction. 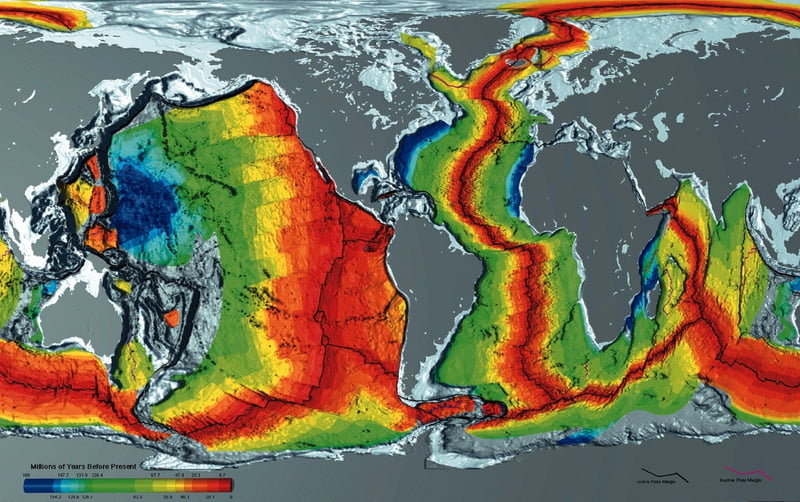 On the map, blue indicates the oldest sections of the oceanic crust, red – the youngest, located along the mid-ocean ridges

Spreading and subduction constantly renew oceanic plates in a cycle that takes about 180 million years. This renewal is part of an even more global circulation of substances between the magma, crust, hydrosphere and atmosphere of the planet.

For example, increased spreading rates are associated with more volcanic activity in the oceans, which also leads to increased emissions of greenhouse gases into the air.

However, in our era, the spreading of lithospheric plates, on the contrary, has slowed down. This conclusion was made by the authors of a new article published in the journal Geophysical Research Letters.

Colleen Dalton and his colleagues at Brown University in the US analyzed samples of oceanic crust in the vicinity of 18 mid-ocean ridges that appeared over the past 19 million years.

Of course, these are average values. In reality, each ridge changes at its own pace and during this time it could grow noticeably or weakly – or even, on the contrary, decrease. Nevertheless, the global slowdown is obvious.

But the reason for it remains unclear. Dalton and his co-authors suggest that this should not be “blamed” on spreading, but on subduction, which has become more difficult in our time. The fact is that over the past millions of years, some mountain ranges, such as the Himalayas and the Andes, have grown noticeably.

This mass enhances the resistance of the continental plates to the oceanic ones that go under them. Subduction is slowing down, and with it, according to scientists, it is difficult to push the oceanic plates apart, and spreading slows down.