(ORDO NEWS) — If the predictions come true, then on May 31 we may expect a rare meteor flare from a little-known meteor shower, reaching a thousand meteors per hour… or we will not see anything at all. Welcome to the wonderful world of meteor shower predictions and forecasts.

The story begins with the discovery of the periodic comet 73P/Schwassmann-Wachmann 3 in 1930 at the Hamburg Observatory.

(We will refer to it simply as “Comet 73P” from now on). Astronomers Arthur Wachmann and Karl Schwassmann captured this furry comet on glass as a +9.5 magnitude object moving through the constellation Hercules.

But it was comet 73P’s orbit that made observers think: passing around the Sun as a short-period comet once every 5.4 years with an orbit inclined by just over 11 degrees relative to the plane of the ecliptic, the comet had every chance of becoming a magnificent object during its passage on May 31, 1930 at 0.062 astronomical units (AU) (9.2 million km) from Earth. 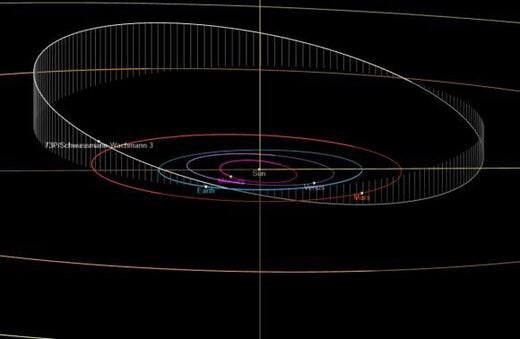 But this was not destined to happen, since the comet 73P during the phenomenon in 1930 was clearly not up to par, reaching only +7th magnitude and never becoming visible to the naked eye.

After it disappeared from view, comet 73P was not seen again until 1995, when the comet’s brightness skyrocketed. This 400-fold increase was all the more dramatic as the comet was over 1.3 AU at the time. from the earth.

When comets fly close to the Sun, they shower down on it the dust thrown up during their passage through the solar system.

If a planet (for example, Earth) is in the way of comets, then a meteor shower arises, which can be observed in the form of bands silently sweeping across the sky. The Perseid and Geminid meteors are two large annual showers, originating from Comet 109P/Swift-Tuttle and Comet 3200 Phaeton, respectively. 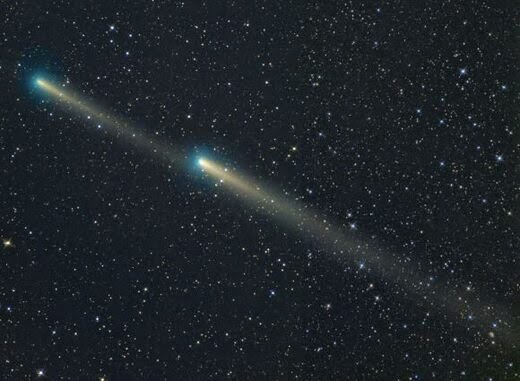 Debris streams evolve over time as the complex movement of the Sun and planets pulls them into and out of the Earth’s path. The Andromedids, for example, were once a great storm in the late 19th century that has since faded into obscurity.

Fast forward to 2022 and the patterns show that things could get interesting later this month. Comet 73P is building a stream known as the Tau Herculid meteors.

The stream got its name from the position of the radiant in 1930 near the star +3.9 magnitude Tau Herculides, although in our time the radiant has moved to the neighboring constellation of Bootes – the Shepherd.

In most years, the Tau Herculids do not attract much attention. However, things could get interesting in 2022 as the Earth is due to cross a couple of key streams laid out by Comet 73P.

In particular, astronomer Jeremy Vaubayon, who works at the Institute of Celestial Mechanics and Ephemeris Calculation in Paris, shows an encounter with the 1892 and 1897 streams, laid down before the discovery of the comet. 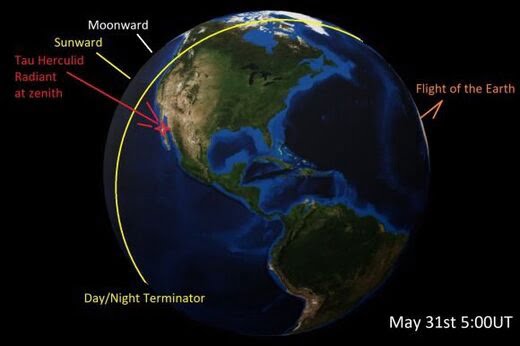 Is the May meteor storm coming?

The key date and time to watch for a possible Herculid outbreak in 2022 is Tuesday morning, May 31, around 5:00 UT or 1:00 AM ET EDT. In the wee hours, the radiant will be high in the sky for Northern Hemisphere observers, which is another plus. The Moon is also far away from us, having reached New Moon just the day before on May 30th.

A tenfold increase from the expected zenithal hourly velocity (ZHR) of 14 per hour from late 19th century streams could mean ZHR 140 (similar to the annual Geminids and Perseids)… and a hundredfold increase could result in 2022 Tau Herculids reaching the level of a real storm – more than 1400 per hour. 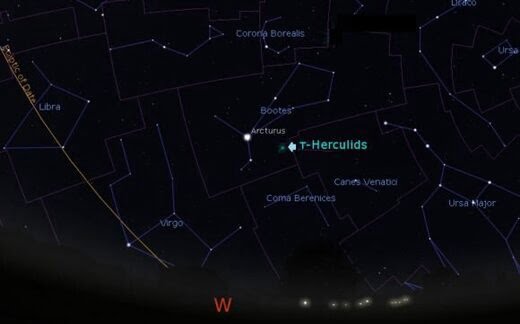 Expect all the Tau Herculids you see to be slow and majestic, coming from a radiant near the globular cluster Messier 3, about a third of the way between the bright star Arcturus and the end of the handle of the Ursa Major asterism.

Believe me, the meteor shower, the speed of which is approaching a thousand meteors per hour, is an unforgettable sight; we once observed just such a Leonid storm from the dark deserts of Kuwait in 1998.

Sure, the Tau Herculids of 2022 can blind or incinerate… but do you really want to risk missing this event? Set an alarm for the morning of May 31st (or stay up late) if the sky is clear… you never know what you might see.