(ORDO NEWS) — Astronomers have never seen anything like it. On October 9, 2022, satellites in Earth orbit recorded the largest gamma-ray burst (GRB) in modern history: GRB221009A.

How strong was it? This caused electrical currents to flow through the surface of our planet. Dr. Andrew Klekochuk from Tasmania recorded the effect using the Earth Probe antenna. 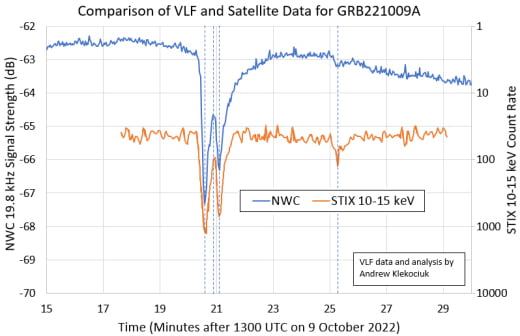 The blue curve is the signal from the Klekochuk antenna, which recorded VLF currents (very low frequencies) in the soil during the explosion.

The orange curve shows a gamma-ray burst recorded by the STIX telescope on the European Solar Orbiter spacecraft, one of the many spacecraft that recorded this event. The waveforms match almost perfectly.

“I’m a climatologist with the Australian Antarctic Division, which is my day job,” says Klekochuk. “VLF is my hobby. I started making VLF radio measurements in the 1970s when I was in high school. This is the first time I have detected a gamma ray burst.”

Klekochuk’s unusual “radio station” uses the Earth itself as a giant antenna. In his garden, there are two metal spikes stuck into the ground at a distance of 75 meters from each other.

They are connected to the receiver via underground wires. In recent years, radio amateurs have experimented with this strange antenna to detect VLF radio signals orbiting our planet in an Earth-ionosphere waveguide.

The Earth’s crust forms one of the walls of the waveguide, which allows the Earth Probe antennas to detect distant transmitters.

“During the gamma-ray burst, I detected flicker from several stations,” says Klekochuk, who made this map showing transmission paths illuminated by gamma-ray bursts.

Researchers have known since 1983 that gamma-ray bursts can ionize the Earth’s atmosphere and thus disrupt a large waveguide. This seems to be the first time anyone has captured the effect with the Earth Probe antenna. 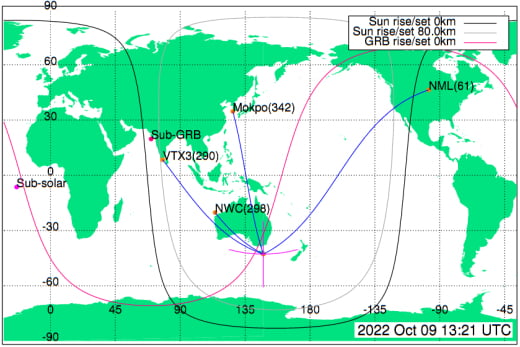 Evans is working with data from NASA’s Swift gamma-ray observatory, and an overflow signal appears to have broken some of his plotting software.

Data from NASA spacecraft has since pinpointed the spike. It came from a dusty galaxy 2.4 billion light-years away and was almost certainly caused by a supernova explosion that gave birth to a black hole

In fact, this is the closest gamma-ray burst ever recorded, which explains its extreme intensity.

Meanwhile, other observers in the UK and Germany also reported ionospheric disturbances caused by the flare. All of them used conventional overhead antennas.