(ORDO NEWS) — The beaching of whales is a mysterious event that has puzzled scientists around the world, and they have yet to figure out its causes.

The whales were euthanized due to the threat of being eaten by sharks if they were returned to the water. The island, which has a population of less than 100, was also facing serious logistical problems.

“This decision is never taken lightly, but in such cases it is the most reasonable option. 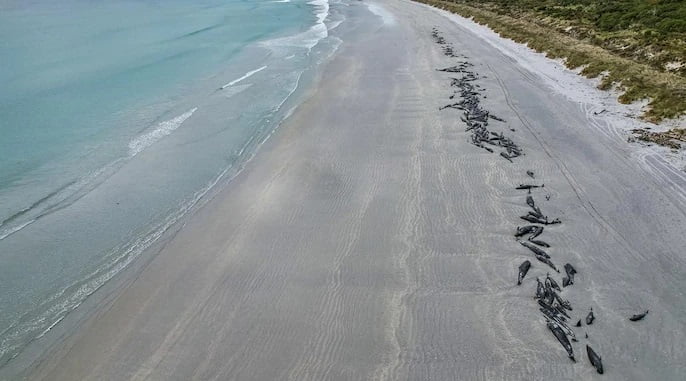 A pod of whales has been spotted in the Chatham Islands archipelago, which is about 840 kilometers off the east coast of New Zealand’s South Island.

The archipelago includes Pitt and Chatham Islands with little human presence. On Saturday, whales were stranded on Chatham Island, resulting in euthanasia of surviving marine life.

Why do whales wash up on shore

Whale strandings are one of the most mysterious events in marine science that have yet to be unraveled by marine biologists.

Scientists suggest that the sociable nature of whales and dolphins, which live in colonies, may be the reason.

They travel together in flocks, often following a leader, and have been known to congregate around injured or injured whales.

Some suspect it may have been a misguided pack leader, others suggest an accident where a group of animals get into trouble and the rest of the group may follow.

Other researchers blame this tragic event on changes in electromagnetic fields in the region due to solar flares or seismic activity.

It should be noted that pilot whales use sophisticated sonar to find prey and orientation. Changes in the electromagnetic field can take them in the wrong direction and away from the water.

Another reason, specific to the island, may be the tides and the shape of the beaches, where if whales or dolphins get into the water, they are sure to be pushed ashore and stranded.

Two years ago, about 470 pilot whales were found stranded on sandbanks off the west coast of Tasmania. It was the largest mass landfall on record in Australia.

The largest mass stranding in modern history occurred in 1918, when 1,000 whales were stranded off the same Chatham Islands.

Whales are a protected species, so even when they are dead it is a crime to enter their carcasses.

In the future, all the continents will merge into one supercontinent, Amasia

In the future, all the continents will merge into one supercontinent, Amasia