(ORDO NEWS) —  A new study indicates that the collision with the hypothetical Theia may have had nothing to do with the formation of the Moon . The study is published in Astrophysical Journal Letters.

In the course of computer simulations, the researchers proposed an alternative theory regarding the appearance of a natural satellite of the Earth.

Simulations by researchers at Durham University’s Institute for Computational Cosmology suggest that the Earth’s collision with Theia 4.5 billion years ago may not have been the cause of the Moon’s formation.

Previous simulations have shown that a collision with a Mars-sized celestial object has resulted in a large amount of debris being trapped in Earth’s orbit. It was believed that over time this ring of debris slowly coalesced into one large mass, our Moon.

However, when considering the geological composition of the Moon’s surface, scientists questioned this model. Lunar rocks delivered by the Apollo mission have an isotopic composition similar to that of the Earth’s mantle. 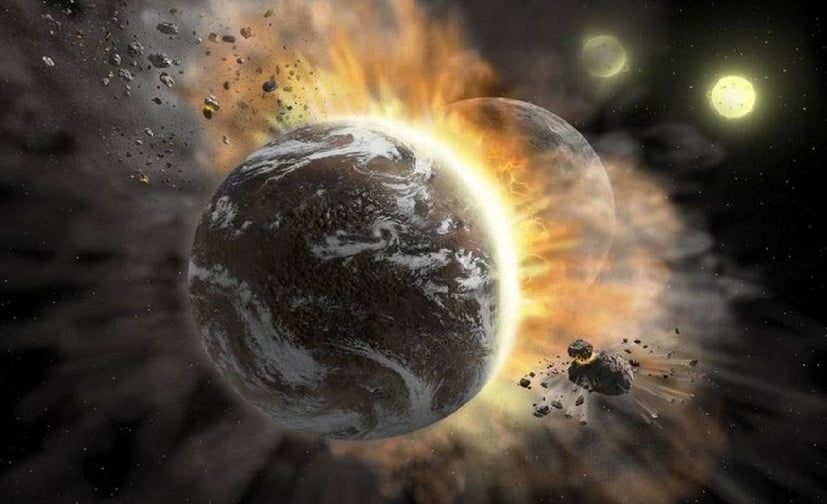 Simulations of the Theia impact suggest that an impact of this nature would have resulted in most of the debris coming from Theia rather than Earth.

According to this model, the appearance of the Moon, which has the same isotopic composition as the Earth, contradicts the above theory.

Through computer simulations, the research team ran hundreds of different exposure scenarios. By varying the angle, speed, masses, and rotations of the two objects, they were able to observe which scenarios most closely match our Moon’s formation history , and concluded that its instantaneous formation was the result of a giant impact.

“This opens up an entirely new range of possible starting points for the evolution of the moon,” the team of researchers said.

This theory implies a completely different internal structure of our Moon and may prompt new studies of the internal processes of our planet’s satellite.

Is the moon older than the earth?

Earlier, scientists from Germany came to the conclusion that the moon arose 50 million years after the formation of the solar system. They also established that our main satellite is even older than the Earth itself.

The researchers analyzed the amount of tungsten and hafnium isotopes in the lunar soil brought back by the Apollo mission.

It is known that the decay of hafnium into tungsten lasted 70 million years from the beginning of the origin of the solar system. Thanks to this, it was possible to establish that the rocks containing these isotopes cooled down much earlier.

That is, if we consider the appearance of a natural satellite of the Earth, taking into account this hypothesis, then even more questions arise regarding the formation of our planet and the entire solar system.