(ORDO NEWS) — Scientists have confirmed the link between alcohol consumption – even in small doses – and structural changes in the brain in a sample of more than 36,000 adults and healthy people in the UK.

Alcohol use is a major contributor to the global burden of disease and high health care costs, and alcohol dependence is one of the most common mental disorders in the world, adversely affecting both the body as a whole and the social life of the person suffering from it, and his cognitive functions.

Chronic alcohol abuse has been correlated with cardiovascular disease, cancer, and accelerated aging.

As previous studies have shown, frequent alcohol consumption (three or more units for women and at least four units for men per day) leads to macro- and microstructural changes in the brain, including in its neural connections.

However, it remained unclear how moderate alcohol consumption affects structural changes in the brain, although it is known that in the elderly this correlates with a lower total organ volume, gray matter atrophy, and lower gray matter density in the frontal and parietal lobes.

The authors of the new work – scientists from the Wisconsin, Pennsylvania and Zurich universities – decided to study in more detail the relationship of alcohol with changes in the structure of gray matter and the microstructure of white matter.

The sample included 36,678 healthy Britons aged 40-69: 19,390 women and 17,288 men. Information about them, including high-quality MRI images of the brain, was taken from the British Biobank.

A large amount of alcohol was understood as more than 18 units per week for women and more than 24 units for men: the former drank an average of 0.87 units per day, the latter – 1.49 units, but some consumed four units each.

As a result, according to scientists, they revealed a link between alcohol consumption and changes in gray and white matter, including microstructural ones. Even when heavy drinkers were excluded from the analysis, the correlation persisted.

“It is noteworthy that associations were also observed in those who consumed one to two units of alcohol per day,” the researchers write.

Going from abstinence to one unit a day did not make much of a difference in brain volume, but if people started drinking two or three units already, there was a clear decrease in both gray and white matter, equivalent to aging by two and three and a half years, respectively. Therefore, each extra drink can affect the brain more than the drink before it. 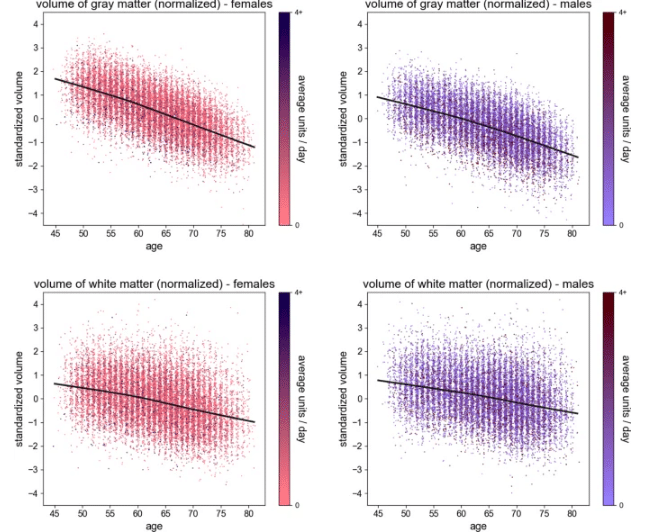 “Our results are contrary to generally accepted recommendations for a safe dose of alcohol consumption,” said Henry R. Kranzler, director of the Pennsylvania Center for Addiction Studies. “While the National Institute on Alcohol Abuse and Alcoholism (NIAAA) allows women to drink an average of no more than one drink per day, the dose for men is twice as high.”

In the future, the researchers want to supplement the results and trace the causal relationship. “We are curious whether it is better to drink one bottle of beer a day than not to drink at all for a week and then drink seven bottles on the weekend,” the scientists concluded.