(ORDO NEWS) — The shiny surface of beetles and some other animals does not help them better camouflage among the environment: perhaps this mirror “camouflage” has a completely different function.

A shiny surface can be found in fish living in open water, in the pupae of some insects and in a great variety of adult beetles.

The most common hypothesis assigns a protective function to this feature: in whatever environment the animal finds itself, its body will reflect the surrounding objects and become less noticeable among them.

However, experiments conducted by Amanda Franklin (Amanda Franklin) and her colleagues from the University of Melbourne in Australia, did not confirm this version.

About 40 species of scarab beetles live in the Australian eucalyptus forests. Their carapace can be dyed in different shades of blue, green, gold and bronze, some are mirrored, others are not.

The biologists took representatives of two closely related species of Anoplognathus , the shiny A. parvulus and the matte A. prasinus , as examples .

Using sculptural clay, they sculpted replicas of these beetles and painted them. Some of the figurines, after some attempts, managed to be polished and made shiny, while the other part was left matte. 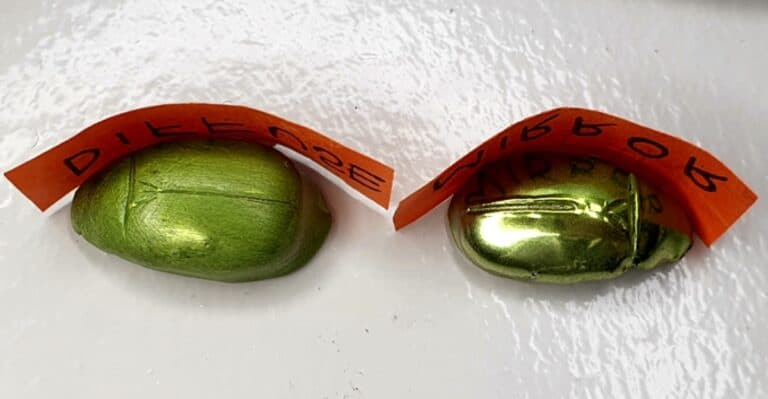 More than a thousand of these models were placed in natural conditions, in two different areas of Australia: in open areas and in dense thickets. They were fixed in place and left for six days, after which they were collected to count the marks from the bird’s beak and claws.

The less often they tried to eat the figurine, the fewer marks should have remained. Scientists expected that this is what the mirror-camouflaged false beetles would show when compared to their frosted neighbors. However, both of them were damaged equally.

Biologists have even confirmed these results with humans. Volunteers wore a pupil-tracking device that allowed them to register with high accuracy how quickly the eye notices matte figures, and how quickly they notice shiny ones. But here, too, no difference was found.

Perhaps mirrored camouflage plays a completely different role – perhaps it is not even related to disguise. The complex microstructures that give the shell its sheen can, for example, make it difficult to colonize with pathogenic fungi. And the mirror surface is just a side effect of such protection.