(ORDO NEWS) — Paleo geneticists examined ancient human remains found in Belize and found that about 7300-5600 years ago, the ancestors of modern speakers of the Chibchan languages ​​arrived in the region from the south.

These migrants proved to be the main ancestral population for all later inhabitants of the region, including the Maya. This group seems to have brought with them the cultivation of corn and possibly other crops such as cassava and chili peppers. This is reported in an article published in the journal Nature Communications.

The settlement of America continues to be a very little studied and controversial topic. Today, we can confidently say that the ancient Americans were south of the ice sheets already 16-15 thousand years ago, although works regularly appear that report even more ancient finds.

Molecular analyzes have shown that the ancestors of the Indians separated from the Siberian and East Asian populations about 23 thousand years ago, and already about 15.5 thousand years ago they were divided into northern and southern lines in the New World.

The further history of the settlement of many populations also remains poorly understood, since bone remains are extremely poorly preserved in hot and humid tropical regions.

So, practically nothing is known about the origin of the people who inhabited Southeast Mexico and the northern regions of Central America (that is, the territories where the Mayan civilization subsequently flourished) about ten to four thousand years ago.

One of the rare exceptions is the publication in 2018 of the results of a genetic study of the remains of two individuals who lived in Belize about 9300-7400 years ago. Then the authors noted that these people were not close either to the modern inhabitants of this region, or to populations from Central or South America.

David Reich of Harvard Medical School, together with colleagues from Austria, Belize, the UK and the US, conducted a genetic study of the remains recently discovered during the excavation of two rock shelters in Belize.

Archaeologists found the bones of 53 people at these monuments, whose age was determined by direct radiocarbon dating. So, six individuals died about 9600-6800 years ago, and 47 – about 5700-1000 years ago. Analysis of stable isotopes of carbon and nitrogen showed that these people began to eat more corn about 4700 years ago, which is also evidenced by paleoecological data.

Scientists selected 28 samples for genetic analysis, but not all of them were suitable for further research. In 19 cases, geneticists managed to determine the mitochondrial haplogroups of individuals, and in 10 cases, Y-chromosomal haplogroups.

Twice they found pairs of close relatives, and in one case they were buried at different monuments located at a distance of about 1.5 kilometers from each other. An analysis of extended homozygous regions showed that these individuals lived in a small population (about 220–435 individuals), but avoided inbreeding. 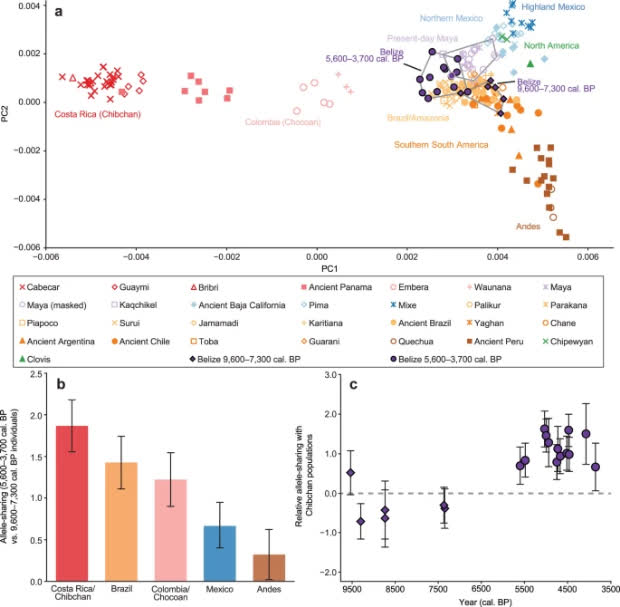 Principal component analysis showed that the studied individuals, who lived about 9600–7300 years ago, were genetically close to the ancient population from South America and showed only a distant relationship with the modern population of Mesoamerica.

Samples 5600–3700 years old turned out to be closer to modern speakers of the Chibchan languages ​​from Northern Colombia, Venezuela and southern regions of Central America. This previously unknown migration from the south had a marked effect on the subsequent population of the region, providing about half of the ancestry of the local population.

Geneticists concluded that the origin of the studied population, which lived about 5600–3700 years, can be estimated as follows: 52 percent of people were related to the ancestors of the speakers of the Chibchan languages, 23 percent to the local older population, and 25 percent to highland Mexican populations.

According to researchers, 7300-5600 years ago, migrants from the southern regions of Central America or the northern regions of South America arrived in the southeast of Yucatan. This likely migration preceded the widespread cultivation of maize, which occurred about 4,700 years ago.

The arrival of these people coincides with the beginning of small-scale cultivation of this crop, which, according to paleoecology, began in the region about 5600 years ago. Perhaps the migrants brought with them not only corn, but also other domesticated plants,

Geneticists noted that these ancient genomes also tell the origin of modern Mayan populations, including the Mopan and Qekchi groups that were studied in this project.

Thus, about 75 percent of the Mayan ancestry (excluding admixtures received after the discovery of America by Europeans) can be traced back to an ancient population that lived in the region about 5600-3700 years ago.

Maya Indians wore jewelry glued with resin on their teeth

Maya Indians wore jewelry glued with resin on their teeth