(ORDO NEWS) — Scientists have spent decades trying to answer the question of how animals make decisions, focusing on neurons and their connections in the brain.

American researchers used a different approach: they analyzed the behavior of animals, namely nematodes. To their surprise, the tiny worms, using only 302 neurons, were able to choose an action strategy, taking into account many factors.

Animals with a varied diet must adapt their food priorities to a wide range of environmental conditions. This diet optimization problem is particularly challenging for predators that compete with prey for a shared food source.

Although “predator-prey” competition is widespread and ecologically significant in nature, the task of separating predatory and competitive motives for a predator attacking a rival prey is still far from being solved.

Wanting to advance in its solution, scientists from the Salk Institute for Biological Research (USA) used a new approach to assessing the motivation and cognitive abilities of animals in the “predator-prey” system.

Moreover, using the example of microscopic worms (nematodes), the authors show that the ability to make complex decisions can be encoded in relatively small biological and artificial neural networks.

“Our research shows that you can use a simple system like a worm to learn something complex like purposeful decision making.

We have also demonstrated that behavior can reveal a lot about how the brain works,” explains senior study author Sreekanth Chalasani , assistant professor of molecular neuroscience at the Salk Institute for Biological Research.

“Even simple systems like worms have different behavioral strategies and can choose between them, deciding which is best for a given situation. This provides a good basis for understanding how such decisions are made in more complex systems such as humans.” 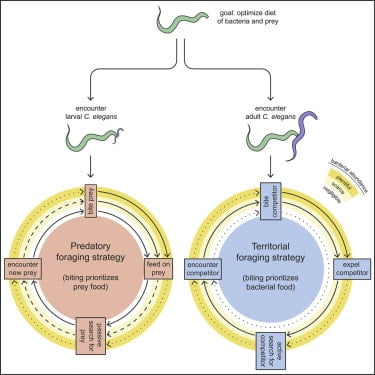 The study was conducted on the example of the interaction of two tiny (no more than a millimeter in length) roundworms, or nematodes: a predator Pristionchus pacificus and a prey Caenorhabditis elegans.

Whether eating a prey worm or protecting its food source (bacteria), the predatory worm P. pacificus relies on “bites” with its peculiar mouthparts. The scientists set out to determine the worm’s intentions when it “bites” a C. elegans prey that is unable to respond to aggression.

The researchers found that P. pacificus chooses between two strategies when biting its prey and its competitor, the C. elegans worm , during foraging: first, a predatory strategy in which the purpose of the bite is to kill and eat the prey; second, a territorial strategy where the bite is used to scare C. elegans away from a food source (bacteria).

P. pacificus was found to weigh the costs and benefits of several potential outcomes of an action—behavior that is common in vertebrates with millions and billions of neurons, but wholly unexpected in a worm with a network of only 302 neurons.

Thus, P. pacificus chooses a predation strategy against C. elegans larvae , which are easily killed with just a bite. At the same time, against adults of C. elegans , which are difficult to kill (it will take about six hours and 25 bites) and which easily avoid bites from P. pacificus , the predator prefers a territorial strategy.

Adult C. elegans run away from P. pacificus after being bitten

“Scientists have always assumed that worms were simple: when P. pacificus bites, we thought it was for the sole purpose of being predatory,” said lead author Kathleen Quach , a researcher at the Salk Institute for Biological Research Laboratory of Molecular Neuroscience.

“In fact, P. pacificus is versatile and can use the same action, biting C. elegans , to achieve different long-term goals. I was surprised to find that P. pacificus was able to use what appeared to be a failed predation to successfully and purposefully protect its food source.”

In future studies, the scientists plan to determine which of the P. pacificus cost-benefit calculations are fixed and which are flexible. They hope that such work will help to learn more about the molecular basis of decision making. 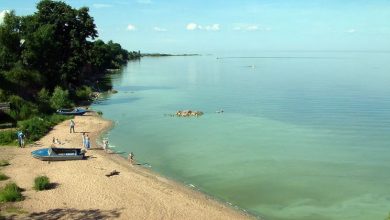 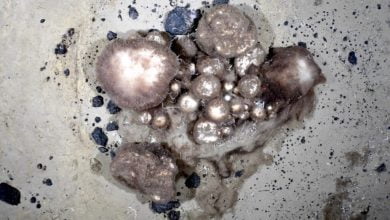