(ORDO NEWS) — There is only one inhabited island on the eastern coast of the Mediterranean Sea: Arvad, or Arvad. Also known as classical Aradus, Arvad is a city in Syria located 3 km from the port of Tartus.

The main attraction of the island is a huge megalithic wall, built thousands of years ago by an ancient civilization that built it from stones weighing several tons.

Surprisingly, the wall covers the entire island, stretching for several kilometers in length. Some experts suggest that they may be evidence of a pre-Edyluvian civilization.

For decades, the existence of this huge megalithic wall has given rise to many theories and hypotheses. How was it built and why did its builders use huge blocks of stone? 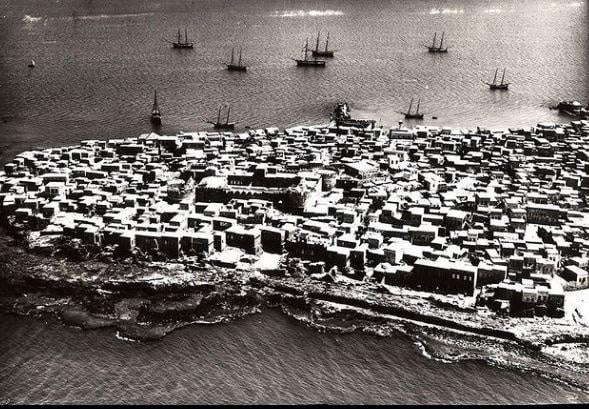 So far, there is no explanation why smaller blocks were not used, which would make the job easier. Based on this, many people wonder what was the reason that made the builders build such a massive and colossal megalithic wall. 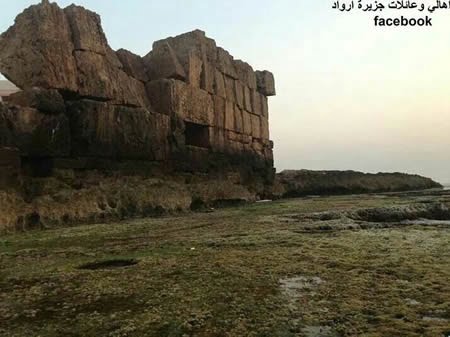 Arwad Island was colonized at the beginning of the 2nd millennium BC. the Phoenicians (an ancient thalassocratic civilization that originated in the Levantine region of the eastern Mediterranean, mainly in what is now Lebanon), thus becoming an independent kingdom known as Arwad Aradus or Jazirat (the latter term meaning “island”). 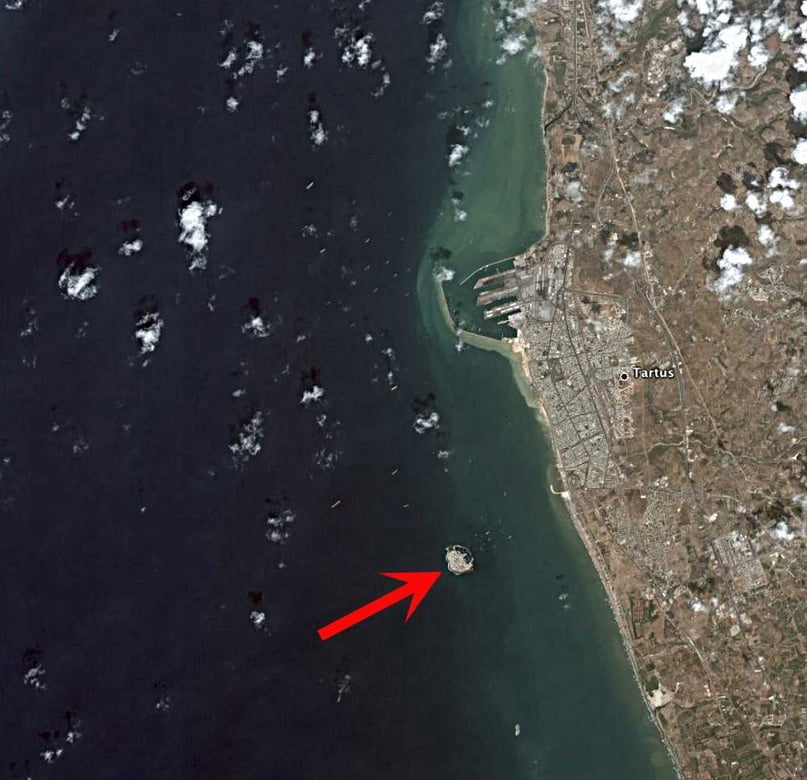 As historian Lawrence Conrad describes, in Byzantine times “the huge walls that surrounded the island on all sides except the harbour, in places were at least 10 meters high and were built from huge blocks up to six meters long and up to two meters high.” 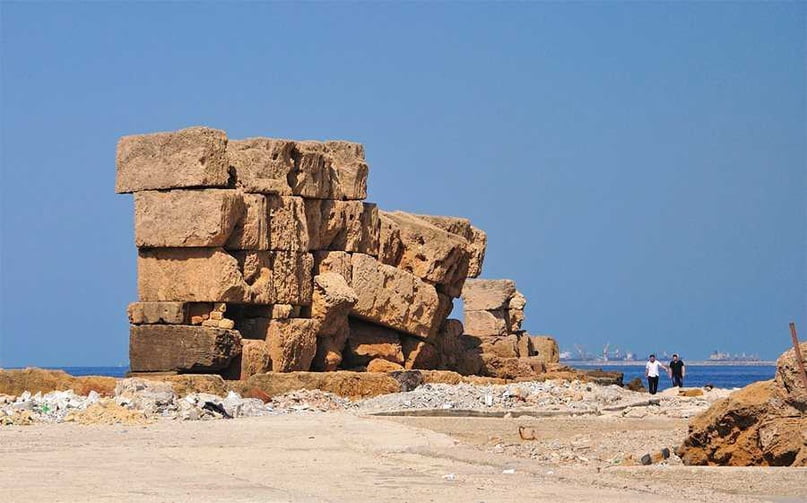 These walls, according to Conrad, belong at least to the Seleucid era following Alexander the Great, and possibly to the Phoenician era.

Only a few segments of the great wall have survived, rising to the very edge of the water, relics of a seemingly impossible feat of engineering.

According to some experts, the Phoenician name for the city was Ainuk. The name Arvad is mentioned in the Bible as the progenitor of the Arvadites, a Canaanite people.

In fact, instead of a monarch, their ruler was known as a suzerain. Despite being an arid and rocky island, it was a large trading city with a powerful navy, so much so that its ships are mentioned in Egyptian monuments. 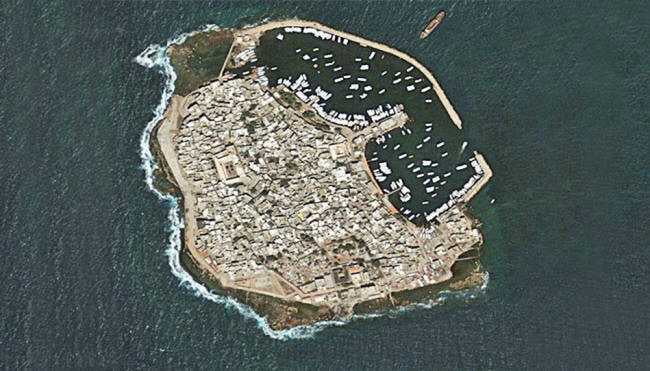 Experts believe that the island wall is one of the classic examples of Roman architecture. However, they are not sure why it was built: some suggest that in order to avoid visiting the island by foreigners, others believe that it was done to protect against the big waves that are typical for this area.

At present, only its foundation remains from the wall, but during the research of this place, evidence was obtained that completely contradicts what was said earlier.

One of the most significant pieces of evidence is that the wall is much older than first thought. The remaining stone blocks of the wall, which were once scattered throughout the island and used by modern residents as building material, suggest that a catastrophe of biblical proportions occurred in the distant past, which led to the destruction of the wall. 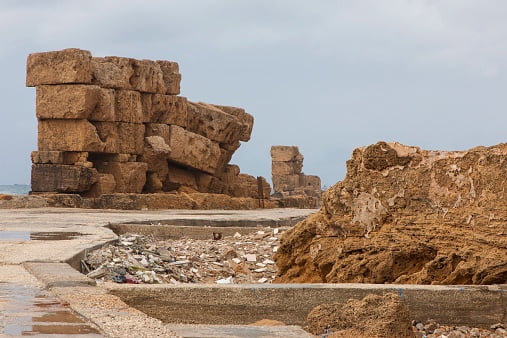 Its inhabitants are mentioned in the early lists of Genesis 10:18, and Ezekiel 27:8,11 speaks of its sailors and soldiers in the service of Tyre.

Some neighboring cities on the mainland, such as Marathos and Simira, came under his rule, the first of which was almost opposite the island, and the second a few kilometers to the south. 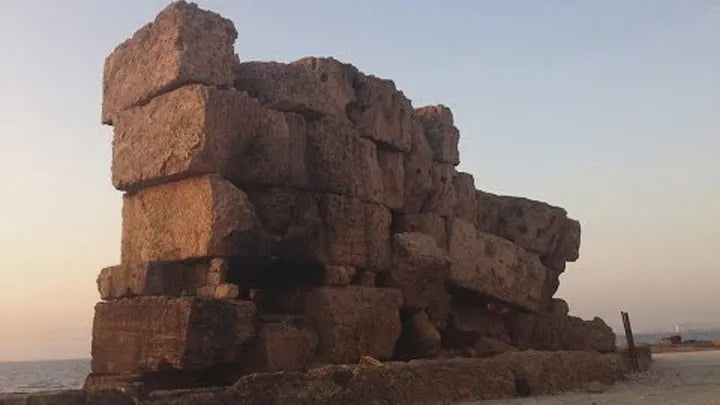 Based on evidence found throughout the area, it is believed that the society that inhabited the site built the wall because they knew a catastrophic flood would occur. The problem is that despite building huge walls, they couldn’t escape their inevitable end.

It is believed that this catastrophe was the Great Flood described in the Bible, sent by God (the Anunnaki in the Sumerian text) to eradicate all previous civilizations that were swallowed up when they were overcome by the tide.

Obviously, experts do not exclude that the remains of the wall, which are now visible, could be part of an even larger structure. They attribute this to the fact that thousands of years ago the sea level was many meters lower than it is today. The sea may well hide other walls or megalithic structures of equal or larger size.

The current state of the Arvad wall, as well as the inexplicability of its construction, led theorists to the idea that before the Great Flood there was a “world”, which, unfortunately, was lost along with all its knowledge. Archaeologists are trying to figure out how these structures were built. But if they were made by more modern ancestors, then why are there no records of their creators?

It seems that there are these colossal megalithic structures everywhere that defy all modern ideas about ancient civilizations and their true technologies and architectural possibilities.