(ORDO NEWS) — The mayor of the Turkish city in which Gobekli Tepe is located recently proposed a fantastic theory about the origin of the ancient archaeological site: aliens.

The remark was reportedly made earlier this week when Zeynel Abidin Beyazgül, head of the Urfa community, spoke to Turkish media outlet Milliyet.

Speaking about the 12,000-year-old complex, the mayor noted that “everyone who sees Gobekli Tepe, a scientist or an ordinary person, claims that there is some mystery and secrets here.

But they cannot find them.” Then Beyazgul boldly declared: “I will tell you about these mysteries and secrets,” which, in his opinion, are connected with the extraterrestrial hypothesis.

The mayor unexpectedly declared that “the statues in Gobekli Tepe depict something other than people. It seems that they came from somewhere else. They remind me of aliens.”

He pointed to a number of elements of this place that formed the basis for this opinion. In particular, the mayor noted that the aforementioned sculptures depict people dressed in clothes that do not correspond to the era in which the complex was built.

“People of that time wore skins, but here we see V-shaped motifs,” he noted, wondering: “If the first people wore skins, then who are these people?”

In addition to the artwork on the site, the mayor also expressed skepticism that the massive stones used to build the complex could have been moved by humans, and instead wondered, “Did creatures come from outer space and do this?”

While the theory that aliens may have had a hand in Gobekli Tepe is not a particularly new idea for fans of ancient aliens, the fact that Beyazgül seems to have approved of the concept is quite remarkable. 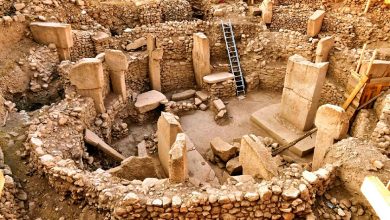