(ORDO NEWS) — If you look at the pictures of Mars, then the planet will seem dusty, dry, cold and lifeless place.

If we turn to science, we can understand that this was not always the case in the past, Mars had a mild climate, dense atmosphere, and on the surface there were rivers, lakes and oceans.

The most recent data indicate that favorable conditions on the Red Planet have persisted for several billion years, and this is quite enough for even a simple life to be born there.

The vast majority of scientists believe that Mars was indeed inhabited and they make great efforts to prove their position. The NASA Curiosity Mars rover is helping researchers in this difficult task and it seems that tangible results have been achieved.

As you know, Curiosity is located in Gale Crater, slowly moving in search of evidence in favor of the fact that life was on Mars.

Note that the Gale Crater is the bottom of an ancient dry lake and this, according to scientists, is an ideal place to gather evidence.

“Gale Crater used to be filled with water that has not dried out for more than a million years. It is no coincidence that this place was chosen for the operation of the rover,” said planetologist Christopher House, working with Curiosity data.

The terrain where the rover has to work is extremely heterogeneous and difficult to study. Soil samples taken from time to time indicate that scientists are close to answering the question of the habitability of Mars in the past. 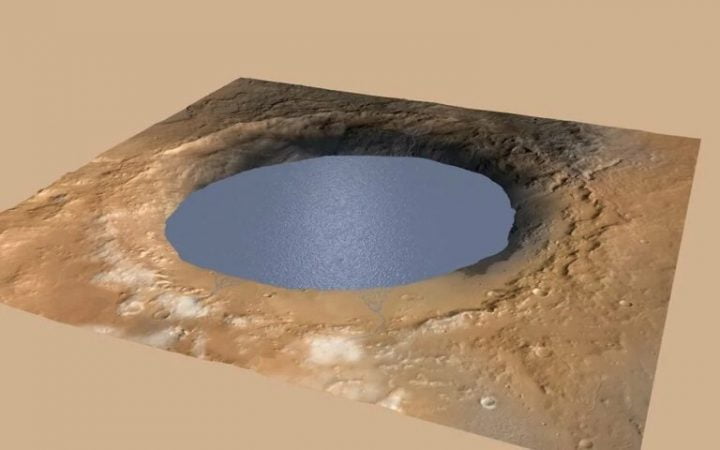 “The cracks in some soil samples were filled with sulfate and this indicates that the rock continued to interact with the water even after the lake had dried up,” House added.

Available data indicate that when the crater lost its water reserves, a considerable part of them appeared below the surface. A whole system of subsurface waters was formed and all this functioned for at least a billion years.

“Every working day of the rover is limited by energy reserves and we need to make informed decisions. Of particular interest are Martian soil samples, which Curiosity “bakes” in its miniature laboratory, and the mass spectrometer allows us to study in detail the molecules released after heating, ”continued Christopher House.

If we omit the technical details of the description of the heating process of the Martian rock by means of the Curiosity capabilities, we can note the moment when scientists were able to fix the presence of pyrite – a sulfide mineral, which in the sediment is able to form only with the participation of organic substances.

“Pyrite proves that there was organic matter on Mars, and now compare everything we know: a mild climate, dense atmosphere, a large amount of liquid water and billions of years in reserve. Was there life on Mars? I’m pretty sure about that! ”

To this we can add the fact that methane emissions are periodically recorded on Mars, which indirectly indicates the presence of at least the simplest forms of life.

Our understanding of the Red Planet is expanding every year, and even if Curiosity fails to give an exact answer, the Persistence rover, which will be launched in June this year, will complete the search for life and dot all the points.

“Every day I work with information that indicates the habitability of Mars in the past or even in the present. I am sure that a great discovery will be waiting for us soon, ”concluded House.

Ancient legendary weapon from the depths of centuries

Ancient legendary weapon from the depths of centuries