(ORDO NEWS) — The location of 120 pyramids was determined by an archaeologist, there is every reason to conduct excavations, the discovery of a new pyramid can become a sensation, but excavations do not begin. Why?

Dr. Vasco Dobrev, while exploring the desert in the Memphis area, found signs that there were pyramids under the sand. He claims that the desert can hide about 120 pyramids.

Back in 2019, Dobrev pointed to a plateau that, in his opinion, is not of natural origin, but is an unfinished pyramid.

He suggests that this is the base of the pyramid of Userkar, who ruled for no more than five years, so his pyramid (its height should have been 52 meters) was not completed.

He attaches the results of geophysical studies, which also confirm the high probability of finding the pyramids under the sands of the Sahara.

His findings were shown in Tony Robinson’s documentary “The Discovery of the Great Tomb of Egypt”.

Mr. Robinson said: “Dr. Vasco Dobrev has been working in the desert near Cairo for the past 30 years, and he is hunting for new pyramids.

Often we think only of the famous pyramids of Giza, but this place called Saqqara boasts not only one pyramid, but many others.

Pyramids have been built here for six centuries of Egyptian history, but especially one dynasty of pharaohs preferred to build their magnificent tombs in Saqqara.” 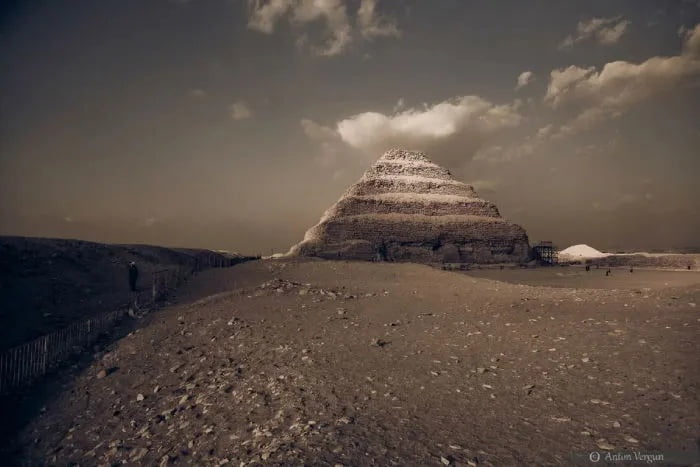 Dr. Dobrev shocked Mr. Robinson by explaining that numerous pyramids could be hiding under the sand.

He said, “There are about 120 pyramids all over Egypt. Pharaohs built pyramids here because Saqqara is right across from the capital of Egypt, Memphis.”

“See this little pyramid? This is Pepi II, his father is here, his great-grandfather is a little behind, and the whole family is around.”

The couple then made their way to the top of a flat plateau where Dr. Dobrev believes the yet undiscovered pyramid lies.

Despite all these arguments and evidence, the “go-ahead” for excavations was never given, although quite a lot of time has passed since 2019.

There are more than enough people willing to sponsor the excavations of Egyptian antiquities. However, what exactly is hidden under the sands in the vicinity of Memphis is not yet possible to find out.

The Egyptian Antiquities Authority refuses to grant permission to search for sand-covered pyramids.

There are only suggestions that the pyramids of many pharaohs and even the legendary architect Imhotep, who is credited with the authorship of the pyramids of Giza, may be located here. However, this has not yet been verified.

For some reason, more and more areas in Egypt are closed to archaeological research. This is especially true for foreign Egyptologists, who have very limited opportunities for research.

Why is this happening? What can archaeologists find under the sands of the Sahara? Questions without answers.