US, WASHINGTON (ORDO NEWS) — It’s no secret that the heat in a humid climate is much more difficult to transfer than in a dry one. Scientists have long predicted that due to global warming in tropical and subtropical regions, by the end of the century there will be such a combination of temperature and humidity that a person can not stand. However, a new study published in the publication Science Advances shows that the predictions are wrong: similar conditions on Earth have already arisen.

Scientists from the United States showed that short-term climatic conditions, in which the combined temperature and humidity exceeded the physiological limits of human endurance, repeatedly occurred in Asia, Africa, Australia, South and North America. Such flares are so far observed in narrowly localized regions. However, their intensity and frequency gradually increase.

After analyzing the data of meteorological services collected from 1979 to 2017, the authors of the study showed that the number of such extreme climatic conditions over the specified period doubled. Most often, they arose on the territory of the Hindustan Peninsula, northwestern Australia, southern China, and also along the coast of the Red Sea and the Gulf of Mexico. The highest, potentially fatal values ​​of humidity and temperature were recorded in the areas of the cities of Dahran and Damman (Saudi Arabia), Doha (Qatar) and Ras al-Khaimah (UAE), whose combined population is about three million people.

Previous studies in this area could not reveal such trends, since they examined the average values ​​of temperature and humidity, measured in large areas and over several hours. The authors of the new work studied hourly reports from 7877 individual weather stations, which allowed us to record short-term outbreaks of fatal heat. 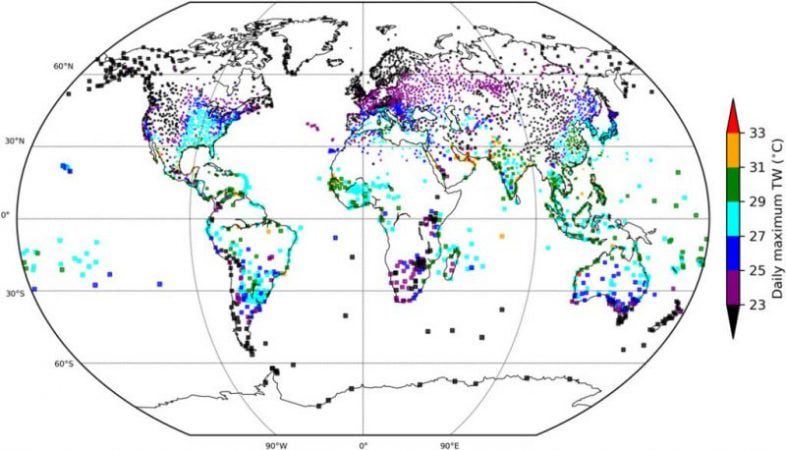 In conditions of intense heat, the human body cools, releasing heat through the skin with the help of sweat. This process works well in arid regions, but not so well in humid regions, where the air is already saturated enough with water vapor and cannot absorb yet. In especially extreme cases, sweating may stop altogether. Then the body will begin to heat up excessively, and even a physically strong, healthy person, resting in the shade without clothes and with the presence of drinking water, may die.

Previous studies have shown that people who are well adapted to high temperatures cannot take active actions when the readings of a wet thermometer (a device that shows the temperature of a wet body) reach 32 degrees Celsius. 35 degrees – the peak value recorded on the coast of the Persian Gulf – is considered the limit of human survival.

Scientists turned the result of their research into an interactive map that reflects the daily maximums of readings on a wet thermometer. The authors of the work believe that climate change brought human communities around the world closer to ultimate strength.

Such climate changes carry the highest risk for poor and developing countries, where people are not able to take a cold shower or stay in an air-conditioned room in a timely manner. But even in regions where residents have such an opportunity, the need to constantly interrupt their activities in order to hide from the heat and cool the body will cause serious damage to the economy.

Earlier, scientists from the University of Texas at Austin found that global warming can enhance the temperature phenomenon called the Indian Ocean dipole, and Amazon owner Jeff Bezos has allocated $ 10 billion to fight climate change.

The radiation level in Chernobyl jumped thousands of times

The radiation level in Chernobyl jumped thousands of times