(ORDO NEWS) — Nearly 12 million years ago, what is now France was inhabited by a predatory mammal the size of a bear, which had powerful jaws capable of crushing bones.

Today you will not meet a predator there more than a wolf, at least a living one. But scientists managed to find the bones of a giant amphicyonid of a new species.

Amphicyonids, or bear dogs (Amphicyonidae) are predators that are distant ancestors of modern meat-eating mammals.

Some amphicyonids were massive and of considerable size: the North American amphicyon of the species Amphicyon ingens, for example, weighed half a ton.

The Amphicyonid, which lived in Western Europe in the middle Miocene, was somewhat smaller: its weight is estimated at 200 kilograms, comparable to the mass of a large male black bear (Ursus americanus).

Judging by the physique of its closest relatives, it was a massive animal, more like a bear than a wolf, with a large head, muscular limbs and a long tail.

The new species was named Tartarocyon cazanavei , or Kazanava’s tartarocion – in honor of Tartaro, the cannibal giant in Basque mythology, and Alan Kazanava, the owner of the land in the Atlantic Pyrenees, on which the excavations were carried out.

Of particular interest to the find is the fact that not many fossils of extinct animals have been found in the north of France, so that even a single lower jaw in a more or less surviving state has already been reached for French paleontology.

Judging by the anatomy of close relatives of the tartaracion, this beast could skillfully deal with large carcasses: like the current bears, which never refused to fall, the ancient bear dog easily tore even the densest skin and crushed bones, so it could feast on the meat thrown out on the sea. 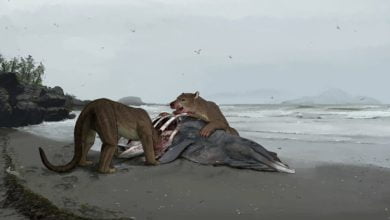 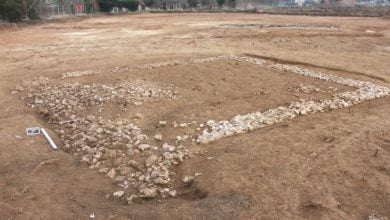