(ORDO NEWS) — In Rome, there is an artificial mound Monte Testaccio, consisting almost entirely of broken ceramics. Perhaps it is the largest garbage heap in the history of the ancient world.

At first glance, Monte Testaccio looks like a normal mound covered with greenery that can be found all over the world.

But underneath all that shrubbery, and the thin layer of dirt that supports it, lies the largest pile of discarded pottery in the history of the ancient world.

Covering an area of ​​2 hectares and a volume of about 580,000 cubic meters, Monte Testaccio is made up of millions of broken ancient earthenware vessels.

This man-made mound is estimated to be composed of 53 million amphorae, making it the largest rubbish heap in the ancient world.

Monte Testaccio is located near the east bank of the Tiber River, where state-controlled stocks of olive oil were stored in the 2nd century AD.

It is made up of millions of amphorae, which were used to deliver vast quantities of olive oil to the capital of the Roman Empire in ancient times.

The mound demonstrates how important olive oil was in ancient Rome. According to experts, the 53 million amphoras in it were used to import about 6 billion liters of oil. 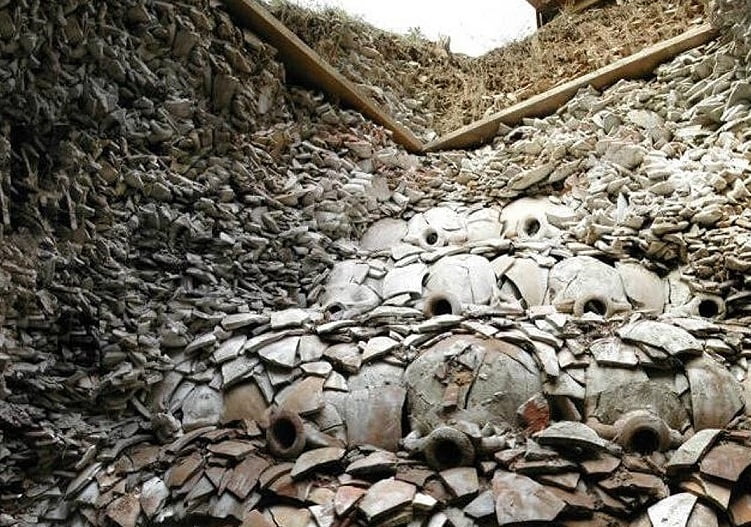 One might think that Monte Testaccio is perceived as a huge pile of amphorae thrown out by chance, but archaeological evidence shows that this is not the case.

Excavations carried out in the early 1990s revealed a well-designed terraced system with retaining walls made from nearly intact amphoras filled for strength with smaller pieces of pottery.

In addition, the wreck appears to have been covered with lime to neutralize the smell of rancid oil.

One question that has puzzled historians and archaeologists for decades is why the Romans chose to throw away millions of amphorae and pile them into a huge mound.

Broken amphorae were usually recycled into drainage pipes, flower pots, or broken into small pieces that were used as an ingredient for concrete.

Experts have several reasons to believe that some types of amphoras, which make up the bulk of Monte Testaccio, were very difficult to recycle.

These amphoras broke into large curved fragments that could not be reduced to smaller fragments.

The use of fragments as ingredients for concrete was also impractical, as the ceramics absorbed the oil, and the chemical reaction of the oil with the lime reduced the quality of the concrete.

For these reasons, the Romans may have thought it best to throw away the broken amphoras.

Once upon a time, this famous garbage heap played several significant roles in history.

She “participated” in the defense of Rome by Giuseppe Garibaldi from the French army, and was also used in passionate plays as a hill of Calvary, or as a place for a picnic.

Model predicted the existence of planet-oceans around red dwarfs

Model predicted the existence of planet-oceans around red dwarfs