(ORDO NEWS) — In P. prominens spiders, after mating, only those males survive that catapult with their partners in time, jumping as far away from them as possible.

Females of some insects and spiders eat males directly during mating or after it. Sexual cannibalism helps to store more resources for raising offspring, but it cannot be said that males are willing to sacrifice their lives for this.

Many of them find different strategies to escape such post-copulatory death hugs, such as choosing not too dangerous partners. And male spiders Philoponella prominens have found a more spectacular way to survive after mating – ejection.

Philoponella prominens live in tight colonies, spreading webs in close proximity to each other. The number of such a group can reach several hundred small spiders, and on average there are one and a half times more males among them than females.

Shichang Zhang of Hubei University and colleagues examined 477 colonies in natural environments, and observed many cases of sexual cannibalism.

Only those males managed to escape, who suddenly and deftly ejected immediately after mating, leaving a dangerous place at a speed of 32 to 88 centimeters per second.

To study this rescue method in more detail, biologists collected young spiders for laboratory experiments. When they reached puberty, the males were placed next to the females, filming the entire process with a high-speed camera.

In this way, scientists followed 155 matings, and in 152 of them, the males managed to escape by pushing off the larger female with their forelimbs.

To confirm the role of this process, in 30 cases they were prevented from ejection by holding with a brush. As scientists expected, all 30 males were eaten.

Zhang and his co-authors showed that the rescue jump is made by pushing with the front legs. While the male sits on the spider, the joints between his tibia ( tibia ) and pretarsus ( meta-tarsus ) – the far segments of the limbs – are bent at about 60 degrees, accumulating hydrostatic pressure.

As soon as the right moment comes, they sharply straighten up, throwing the spider away. The safety thread allows you to stay on the web: scientists have shown that if you cut it, the male will simply fly away and fall to the ground. 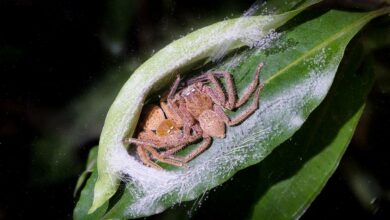