(ORDO NEWS) — The Erlitou culture dates back to the early Bronze Age and existed in the Yellow River Valley region of ancient China. The culture was named after a village discovered in the central Chinese province of Henan in 1959.

Apart from the Erlitou site, other sites related to this culture have been found in Henan, Shanxi, Shaanxi, and Hubei. Chinese archaeologists equate the Erlitou culture with the Xia Dynasty, China’s legendary first imperial dynasty. 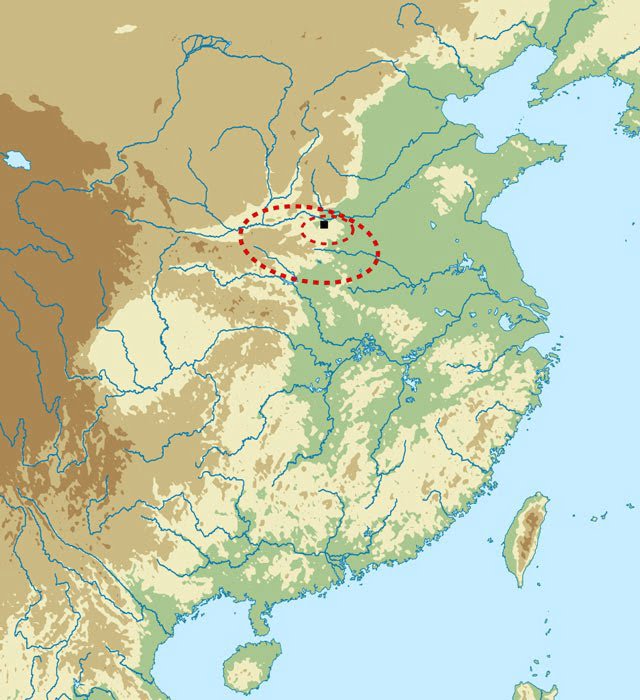 The Erlitou site is located in Yangshi County, Henan Province, central China. The site, only discovered in 1959, takes its name from a nearby modern village.

According to Chinese legend, the Xia Dynasty was China’s first imperial dynasty. This dynasty is believed to have lasted from about 2070 to 1600 BC.

According to historical documents that were written in later times about this dynasty, the Xia founded their kingdom on the banks of the Yellow River. In addition, there were 11 major clans that paid tribute and pledged their allegiance to the Xia.

The founder of the Xia Dynasty is a legendary figure known as Yu the Great, who supposedly lived between the 22nd and 21st centuries BC.

The most famous legend about Yuya is the one in which he controls a devastating flood known as the Great Flood. However, the story does not begin with Yu himself, but with his father, Gong.

According to legend, the Great Flood occurred during the reign of Emperor Yao, one of the Three Sovereigns and Five Emperors. The great flood affected the valleys of the Yellow River and the Yangtze River, causing much suffering to people.

On the advice of the Four Mountains, Yao’s advisory group, the emperor entrusted the task of fighting the Great Flood to Gong. To stop the flood and prevent further destruction, Gong decided to build dams. Gunyu managed to steal magic clay from heaven.

This clay was able to grow constantly and could never be used up, thus providing Gong with an inexhaustible source of raw materials for the construction of dams.

According to one version of the legend, the theft of the magic clay angered Shandi, the supreme deity of the Chinese pantheon, who ordered the execution of Gong. The legend goes on to say that three years after Gong’s death, his body was found miraculously preserved. When he was split, his son Yu was born.

Another version of the legend says that Gun fought the Great Flood for nine long years, during which a huge amount of resources and labor was expended. Despite his best efforts, Gong was unable to curb the Great Flood that continued to devastate the earth.

By this time, Yao had succeeded Emperor Shun, who ordered Gong’s execution as punishment for his failure to control the Great Flood. According to an alternative version of the legend, Gun was killed by one of his enemies.

After Gong’s death, his son Yu was tasked with controlling the Great Flood. Unlike his father, Yu adopted a different flood control strategy.

Instead of trying to build dams to stop the flooding, Yu made sure the water was diverted to the sea. This was achieved by deepening the river routes. It is said that Yuyu was assisted in this work by dragons.

In any case, after 13 years of endless struggle, Yu finally managed to take control of the Great Flood.

Yu’s success in fighting the Great Flood earned him the love and respect of the people. In addition, it is said that Yu traveled around China, writing down what he saw and heard.

The ancient text “Classics of Mountains and Seas” is attributed to Yu. In addition, there are stories about how Yu fought monsters and saved people’s lives. Therefore, it is not surprising that before Shun’s death, Yu was appointed his successor.

When Yu became the new king, he founded the Xia Dynasty. Yu founded the dynasty by replacing the “abdication system” practiced by the Three Sovereigns and the Five Emperors with a hereditary monarchy.

According to reports, the Xia Dynasty lasted over 400 years and was ruled by about 17 kings. After its fall, the Xia dynasty was replaced by the Shang dynasty.

It is believed that the Xia dynasty was the first state society in China.

The Erlitou site is considered a significant discovery as archaeological evidence from the Xia Dynasty has been found here. The site was discovered in 1959 by Chinese archaeologist Xu Xusheng. For decades, excavations have been carried out at this site, the last in 2003.

In addition to Erlitou, other sites associated with the Erlitou culture have been discovered since its discovery. These places are located along the Yellow River, which corresponds to the traditional territory of the Xia Dynasty. 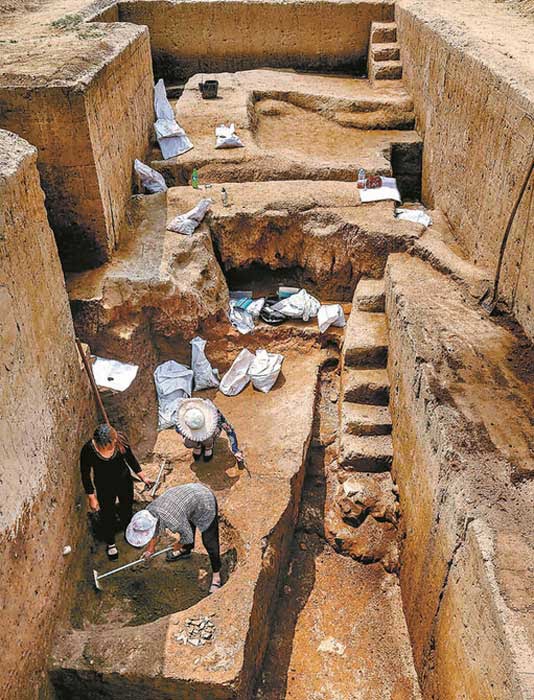 Judging by the archaeological evidence, the Erlitou site was occupied as early as the 4th millennium BC. This period corresponds to the Neolithic Yangshao culture. Evidence of occupation continued into the next millennium, during which the Yangshao culture was replaced by the Longshan culture.

However, after these two periods of occupation, it appears that the site was abandoned for the next 600 years. Around 1900 B.C. the site was repopulated, this time by the Erlitow culture. The site quickly grew in importance and by the next century it became one of the main urban centers in the area.

By the Erligang period, which lasted from about 1600 to 1250 BC, the importance of the settlement declined and it was finally abandoned.

Archaeological data obtained at this place, in particular, during the Erlitu period, indicate that at that time a state existed here. Therefore, Erlitou soon became identified with the Xia dynasty.

Such evidence includes the remains of a ceremonial area, workshops, palaces, elite burials, and a planned grid of roads. All this indicates that the object belongs to the state, since its existence became possible only thanks to state control and organization.

A total of eight palaces have been identified so far in the Erlitu site. They are distinguished not only by their huge size, but also by the elite architecture, as well as the luxury items found in them. The palaces have rammed earth foundations, and two of them have been found enclosed in a central palace complex.

These two palaces were once considered the earliest palatial structures in China. Based on their findings, archaeologists have concluded that the earliest Chinese palaces were simple, with one gate and one courtyard. 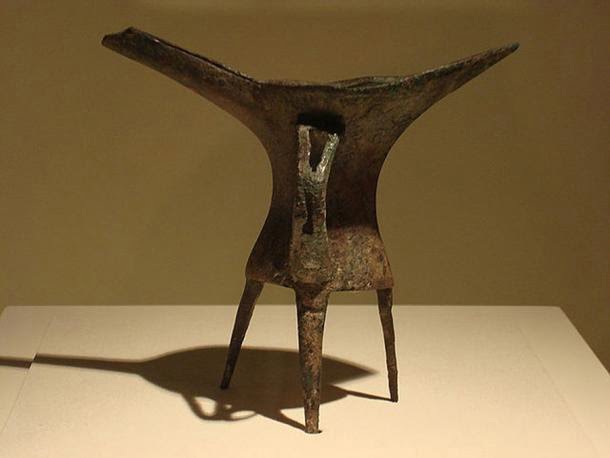 Apart from these two palaces, only one other palace at this site has been completely excavated. This third palace was excavated by Chinese archaeologists back in 2003. It was found that the palace was 150 meters long and consisted of at least three courtyards.

These new finds show that early Chinese palaces were in fact more complex than previously thought, and have prompted archaeologists to reconsider their previous findings. With five other palaces not yet fully excavated, there is certainly much more work to be done at the site.

In addition to palaces, there are also workshops on the site of Erlitu. They testify to the fact that craft specialization existed in early Chinese society.

The products of these workshops have been found in the elite burials of the Erlitou culture. Among them are ceramics, jade artifacts, lacquerware, turquoise and bronze items. Elite burials can also be distinguished from non-elite ones by their location.

Archaeological excavations have shown that the elite were buried in the courtyards of palaces. On the other hand, non-elite burials were scattered throughout the site, without any centralized burial site.

The existence of two different types of burials suggests that Erlitu society was socially stratified, which must have happened with the rise of the state.

Pottery kilns, craft workshops and a turquoise workshop have been discovered at this site. The variety of items produced in these workshops testifies to the level of craftsmanship achieved by the Erlitu culture.

For example, pottery included not only simple vessels, but also molded animals, glazed pottery, and ware engraved with dragon-serpent, tortoise, and human motifs. In addition, various jade artifacts were discovered.

These include “kong” (an octagonal jade token), “gui” (an elongated pointed jade tablet), and “zhang” (a jade tablet).

While the various items produced in these workshops are already impressive, the Erlitou site is most notable for its bronze artifacts. Large workshops for the production of bronze have been discovered at this site. It was here in Erlitou that the earliest known Chinese bronzes were made.

These bronze artifacts include knives, bells, and drinking vessels. The latter are of the type known as “jue”, as shown in the figure above. These are vessels with three legs and a loop handle, which were used exclusively for the ritual use of wine.

Another notable bronze artifact is a bronze plate in the shape of an animal’s head, adorned with turquoise stones. It is believed that this is an example of the mastery of the Erlitu masters in the technique of chasing.

In conclusion, it should be noted that Erlitu’s place is remarkable for a number of reasons. In the course of archaeological work, not only many exquisite artifacts were found here, but, more importantly, evidence indicating the existence of the state.

These include social stratification, in which society is divided into elite and non-elite, as well as craft specialization. Because of this, the Erlitou culture has been equated by Chinese archaeologists with the Xia Dynasty, the legendary first imperial dynasty of China.