(ORDO NEWS) — King Cambyses II, ruler of the Achaemenid Empire (First Persian Empire) and son of the legendary Cyrus the Great, in the 5th century BC (two and a half thousand years ago) sent an army of 50 thousand people to attack certain people.

What happened to this huge (at that time) army is still one of the greatest mysteries of the ancient world. 50 thousand soldiers simply disappeared without a trace.

Some believe that the story of Cambyses’ army is fiction, a popular myth. However, archaeologists think otherwise and many excavations have been carried out in an attempt to find out what really happened to the warriors.

Of course, the terrain they were crossing was very inhospitable, but they were following long-established and well-known routes, and it would indeed take something very disastrous for them to disappear.

In 524 BC, Cambyses II sent an army on a mission to attack and enslave the inhabitants of the Temple of Amun located in the Siwa oasis, known as the “Ammonians”.

The Persian king wanted to strengthen his claims to Egypt in order to legally obtain the throne of the pharaoh.

Cambyses began with a polite request, but the powerful priests of the Oracle of Amun were unwilling to grant such legitimacy to the king, which made him extremely angry.

To cope with the situation and crush their resistance, Cambyses sent his people to burn down the great temple of Zeus – Ammo. 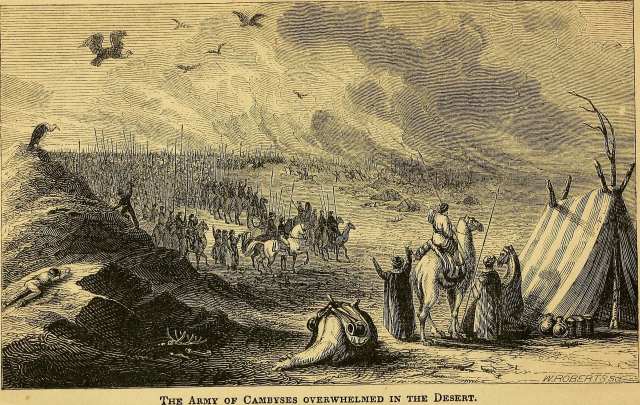 A large army embarked on a mission and began marching across the Sahara to the Siwa oasis, deep in the desert. They wanted to teach the rebellious priests a lesson so they could be shown their place.

It would take only seven days in the desert for the army to reach the oasis, which historians believe was then called El Kharga.

But they never reached him: an army of 50,000 people disappeared during the march to their destination.

Of course, this would have been a complete disaster for Cambyses, but in fact we have no evidence that this had any effect on his style of government and power. This is why, in general, some believe that this event never existed.

As for the plans of Cambyses II to conquer Egypt, he succeeded in everything without the supposedly lost 50,000-strong army.

In June 525 BC, the Persians laid siege to Memphis and forced the Egyptians to surrender, after which the rest of Egypt was subdued without much effort.

By the end of August, Cambyses II was proclaimed pharaoh of Egypt and founded a new, XXVII dynasty. 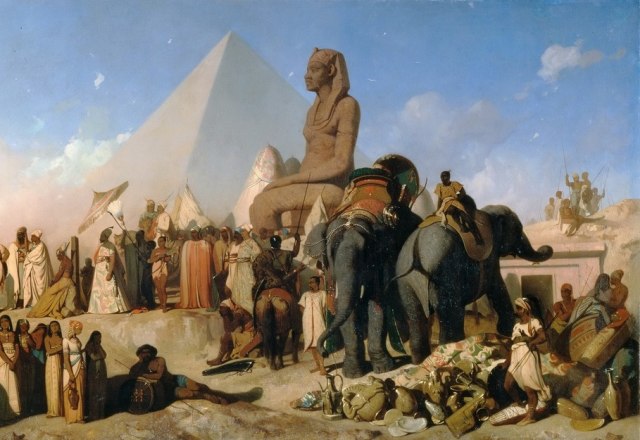 There are some ancient clues that may help to understand what happened to his army.

Thus, according to Herodotus, an ancient historian from Greece, a deadly and strong wind rose from the south when the army was almost halfway through the desert, engulfing them in a great sandstorm.

The intensity of the sandstorm was so great that the entire squad of 50,000 warriors was engulfed in it, and they did not have time to react or avoid the situation.

Even though the squad consisted of tens of thousands of people, they had no chance against Mother Nature.

The strength of the natural weather phenomenon was so great that the entire army detachment disappeared under the sand, and they were never found again.

The traces of these people have been lost and no one has ever heard of them, neither the Egyptians, nor the Persians, nor the Greeks.

Of course, this is only an assumption, because Herodotus himself was guessing, offering the most reasonable explanation that he had.

But because of such a difficult situation, the army could easily get lost and disappear in the expanses of the Sahara.

Excavations by archaeologists have unearthed some artifacts and human remains believed to be of Cambyses’ army, having carried out exploration work near the area where the army was thought to have disappeared.

This was found in the area of ​​a large rock that could be used as shelter from sandstorms. Several ancient military objects, such as arrowheads and bronze daggers, were found using a metal detector, which suggest they belonged to the era of Cambyses.

Both the remains and the tips with daggers represented such an insignificant part of the 50,000th army that they did not prove the theory of an incredibly strong sandstorm.

In that era, there were a lot of military conflicts in these places and, of course, sandstorms regularly occurred in which individual soldiers could die.

However, most eminent historians did not think so, and in 1996 they officially announced that the mystery of the disappearance of the 50,000th army of Cambyses was finally solved.

Unfortunately, after this conclusion, no new excavations were carried out in those places. Some researchers believe that it is very in vain and that scientists are too arrogant in their conclusions.