(ORDO NEWS) — Residents of Slovakia discovered during a holiday in the vicinity of the city of Glohovec a large bronze dagger, the length of which is almost 26 centimeters.

Artifacts of this kind are characteristic of the burial mound culture that arose in Central Europe around the 16th century BC. This was reported in a press release from the Trnava Regional Office for the Protection of Monuments.

In the Middle and Late Bronze Age, that is, around 1600–1200 BC, a culture (or group of cultures) of burial mounds spread across Central Europe, replacing the Unětice culture. Archaeologists distinguish it primarily because of the characteristic burial rite, the predominance of pastoralism over agriculture, and the type of bronze artifacts.

Few settlements of this culture are known, so the main source of information is burial grounds, usually consisting of several dozen mounds.

As a rule, under one mound there was a burial according to the rite of inhumation of one person, less often a pair. In the burials and hoards of the bearers of this culture, archaeologists have found numerous bronze items: pins, bracelets, brooches, daggers, swords, as well as sickles and knives. 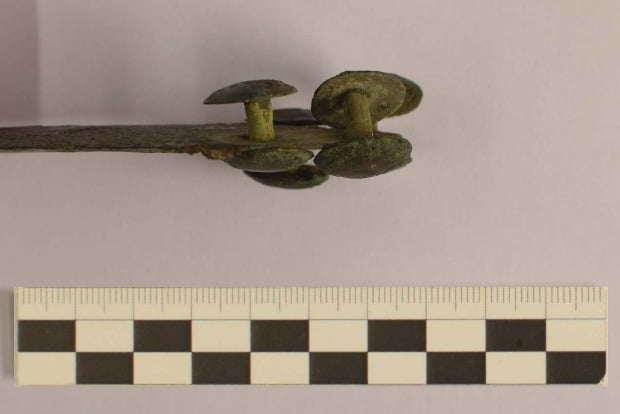 Residents of Slovakia while relaxing on the banks of the Vah River, near the town of Glohovec, stumbled upon an unusual artifact that they decided to take with them. Upon returning home, they realized that this was an ancient object, so they decided to take it to the nearest museum.

This artifact turned out to be a short sword or a large dagger made of bronze, which was found thanks to a decrease in the water level in the river. Its length is about 26 centimeters, and its weight is almost 150 grams.

The handle of this weapon has not been preserved, as it was made of organic material. According to archaeologists, the dagger could have been thrown into the river as part of the rite, or it was lost by the owner, for example, when the river was ford.

Scientists noted that such objects are found in a vast area in the Danube basin – from southern Germany to Serbian Vojvodina. Such daggers are characteristic of the barrow burial culture that arose in Central Europe in the 16th century BC, that is, in the Middle Bronze Age. This is the fourth such find found in the Travna area since the early 2000s.