(ORDO NEWS) — A powerful laser beam made it possible to create a 50-meter channel for the propagation of discharges – an “air lightning rod” to control lightning strikes.

Lightning rods have been used for centuries to protect against lightning. Such long metal rods create a path with little resistance, along which the charge passes further into the conductor – and into the ground.

This does not always happen, because the process is initiated in a thundercloud, at a fairly high altitude, and spreads chaotically.

Therefore, several decades ago, scientists proposed the use of lasers for this purpose. A sufficiently powerful beam, traveling through the air, creates in it a narrow region of low pressure containing increased amounts of charged particles – a rarefied plasma.

Such a “trail” from the laser gives lightning a path almost as convenient as a lightning rod, and it can continue up to a great height.

But so far, attempts to implement such an approach have been successful only in the laboratory .

A successful demonstration took place only recently, in the Swiss Alps, on Mount Sentis, where a telecommunications tower is installed that receives about a hundred lightning strikes every year.

Thanks to this, the top is actively used to study discharges; it is equipped with a mass of necessary tools.

It was there that researchers from the University of Geneva and their colleagues from TRUMPF experimented, which provided a powerful laser and specialists to work with it. 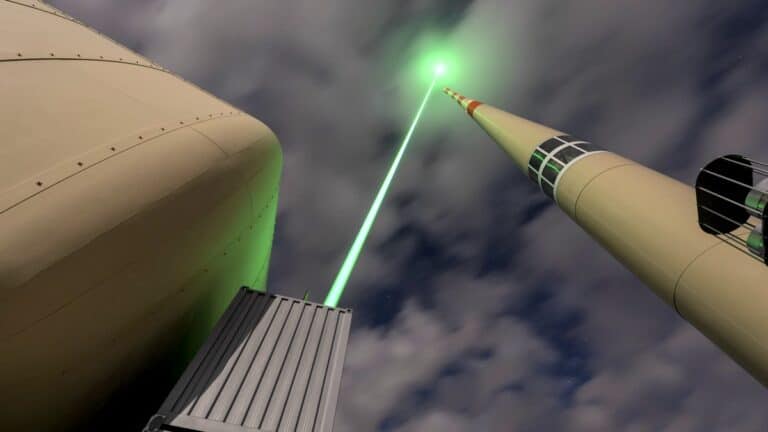 The experiments took place during several thunderstorms, from July to September 2021. The laser for them was used much more powerful than in previous attempts to “tame” lightning.

It emitted pulses at a kilohertz frequency, thousands of times per second, orders of magnitude more intense than past instruments.

This made it possible to create a more stable plasma channel for lightning in the air. Within six hours, the tower on Sentis received four discharges, which spread precisely along the path “marked” by the laser.

The beam was oriented in such a way that it passed at the very lightning rod installed on the tower. Thanks to this, the lightning went into it and did not fall into the laser equipment.

In one case, the discharge occurred under a relatively bright sky, and its trajectory was filmed with a camera. Scientists visualized three other lightning using radio waves.

Such work showed that the laser created a path at a distance of about 50 meters, forcing electricity to move along it.

This is much more than lightning rods, which are several meters long. However, scientists have yet to reach the very clouds – perhaps with the help of even more powerful lasers.