US, WASHINGTON (ORDO NEWS) — Large- mouthed Guban (Epibulus insidiator) is a medium-sized fish that spends its life in colorful lagoons and among the coral reefs of the Indo-Pacific region. Cubans are found in the Red Sea and on the east coast of Africa to South Africa.

In length, they reach about half a meter, females and males have different colors: if the females are bright yellow, then the males are not so noticeable, but no less elegant: the head is white, a dark strip stretches through the eyes to the edge of the gill covers, the back is red-orange, and the sides are cast yellow and green (and the male color becomes brighter during the mating season). 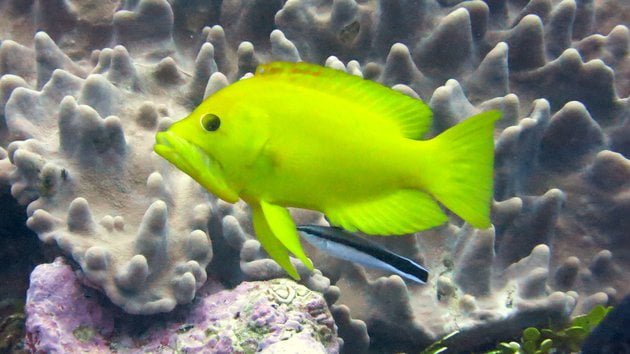 These fish swim alone at a depth of up to 42 meters along the walls and cliffs of reefs that go to a depth, looking for their victims there – smaller fish, shrimps and sometimes insects.

Having noticed the prey, the large-mouthed gubanas do not follow after it, even if the unlucky fish tries to swim away – they simply sharply stretch their tube-shaped lower jaw forward and suck in the victim. It just looks incredible (and frightening):

This video was shot by an underwater company operator. Biopixel(which specializes in filming marine life) and marine biologist Richard Fitzpatrick (Richard Fitzpatrick), and he is especially proud of the fact that he was able to capture the feeding of the large-mouthed guban in all its details. Once he spent 72 hours with the camera at the ready to film the birth of a seahorse, but then you could at least understand when the baby should be born, having noticed the contractions. There are no such warning signals with a large-breasted guban – he throws his jaw forward suddenly and in a flash absorbs prey.

“Since the depth of field is very shallow, and the action is so lightning fast – you need a lot of attempts to focus everything,” says Richard. It took him more than a hundred attempts to get the cherished shots of how a large-mouthed guban catches up and sucks a shrimp.

The same feature allows fish to easily “grab” their prey, even if they try to hide between corals, in crevices of stones, cracks and other indentations.

It is believed that this is the longest lower jaw that generally exists in fish.

How to plant plants in an aquarium

How to plant plants in an aquarium