(ORDO NEWS) — Debate ensues over where the pharaoh’s dagger was forged on Earth. A gold-hilted dagger found in the tomb of King Tut surprised archaeologists when they discovered that it was made of a material forged in outer space.

Now, two new studies are painting conflicting pictures of the origins of the mysterious weapon, which may have been wielded by arguably the most famous ancient Egyptian pharaoh.

One of those studies on the dagger, made of iron from meteors, suggests it was manufactured in Anatolia (modern-day Turkey), while the other study indicates its Earthly origins are still a mystery.

At the time King Tutankhamun reigned (1333 B.C. to 1323 B.C.), iron smelting had not been invented yet, meaning the metal was a rare and precious commodity that often came from meteors.

In one of the new studies, published Feb. 11 in the journal Meteoritics & Planetary Science, researchers describe how an adhesive used on the dagger’s gold hilt was likely made of lime plaster, a material that was used in Anatolia at the time Tutankhamun reigned. This lime plaster, however, was not widely used in Egypt at that time, the researchers wrote.

Additionally, historical records found at the site of Amarna, in Egypt, show that Tushratta, the king of Mitanni in Anatolia, gifted at least one iron dagger to Amenhotep III (who reigned from about 1390 B.C. to 1352 B.C.), the grandfather of Tutankhamun, the researchers noted.

The team also found that the “iron blade was made by low-temperature heat forging at less than 950 °C [1,742 degrees Fahrenheit],” since a mineral called troilite and formations of iron-nickel crystals known as “widmanstätten patterns” could be seen on the dagger, the researchers wrote in the journal article. 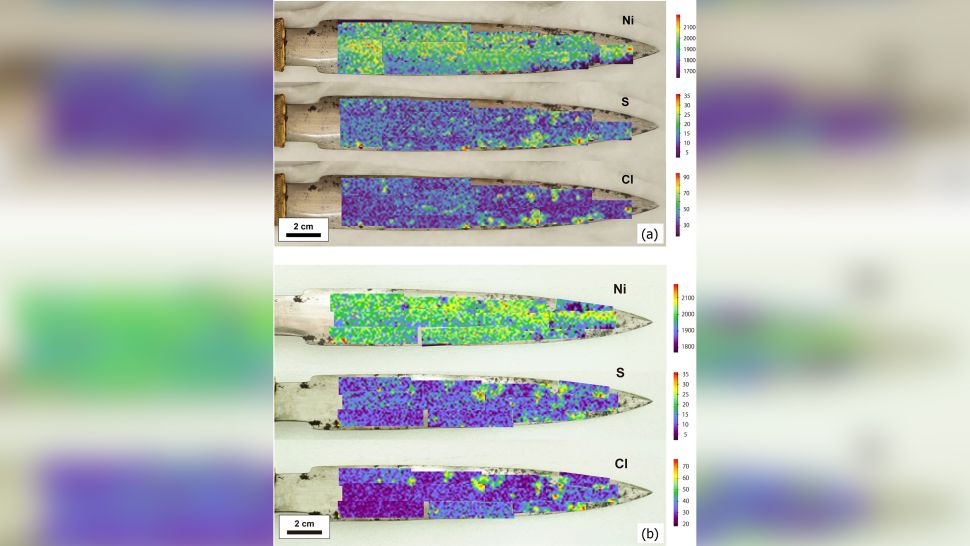 However, in another study, published in the book “Iron from Tutankhamun’s Tomb” (American University in Cairo Press, 2022), researchers found that “it is currently impossible to arrive at a reliable conclusion as to the origin of Tutankhamun’s iron objects or the craftsmen and materials involved,” the research team wrote.

Those study authors noted that the “rock crystal” of the blade’s pommel is similar to artifacts widely used in the Aegean area, while the pommel’s “typically Egyptian shape suggests either manufacture in Egypt or foreign production for an Egyptian market,” the research team wrote. “As a result, no clear overall picture on the origin of the dagger’s handle and blade” can be made.

Albert Jambon, a researcher at Sorbonne University in France who has conducted extensive research on artifacts made of meteor iron, was unconvinced by the findings that placed the manufacture of the dagger in Anatolia.

Jambon disputed the claim that the lime plaster was used as an adhesive. He noted that in the 1920s, limestone powder was used for the cleaning of some Tutankhamun artifacts and that the chemical tests used in the study detected this cleaning solution, not an adhesive. Additionally, “the hilt and the blade are two separate parts” and could have been manufactured in different places, Jambon said in an email.

Marian Feldman, W.H. Collins Vickers chair in archaeology at Johns Hopkins University, said that if the team’s findings that the dagger was manufactured in Anatolia are correct, it “would be important confirmation that some of the luxurious objects found in Tutankhamen’s tomb were diplomatic gifts from abroad,” Feldman wrote in an email. More research is needed to confirm those findings, Feldman added.