(ORDO NEWS) — Have you ever wondered where the image of humanoid aliens came from ? Yes, they can be gray and green, small and large, evil and kind, but the resemblance to a person is noticeable even to the naked eye.

Even the ugly xenomorphs from the Alien universe, invented by artist H. R. Giger in 1976, are similar in many ways to people – arms, legs, head, mouth and teeth.

And militant aliens from the world of “Predator” are completely familiar with human feelings and are often guided by our principles.

Some thinkers argued that the imagination can send a person anywhere, but they were very wrong.

The human imagination is a weak tool, which is more likely to transform the existing reality, but not to create something fundamentally new.

For example, when creating a wheel, a person was inspired by the tumbleweed, and when inventing an airplane, by the capabilities of birds.

Yes, even textile fasteners (“Velcro”), which cease to function after several washes, are created on the basis of “thorns” of burdock.

The situation is similar with the creation of images of creatures that can live in the far corner of the universe.

We have never seen extraterrestrial life, we have no proof of its existence, and our imagination is a weak and limited resource. All we can do is look around, take as a basis and modify a little.

How was the image of the xenomorph created?

They took a recognizable human body, slightly modified the head, painted it in an ominous black color, added a tail and the function of laying eggs. All!

How was the predator created?

They took the same person as a basis, put on dreadlocks, a mesh and made a disgusting oral cavity like that of some kind of insect. Everything, the image is ready!

The image below shows the fossils of ancient sea lilies (one of the classes of echinoderms). The author captioned: “This group of fossilized creatures looks like they came from another planet!” 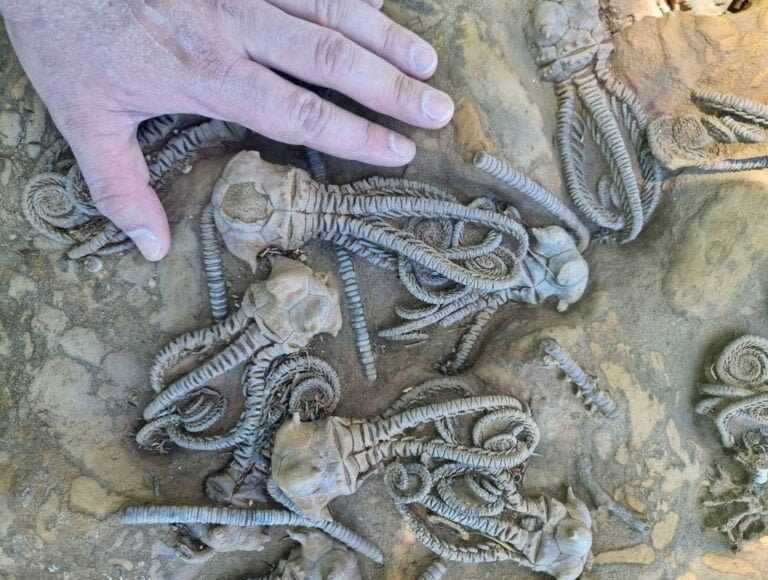 No no and one more time no! Why is it suddenly from another planet? They lived on our Earth , evolved over millions of years and even left behind about 700 species.

By the way, the creators of the legendary “Matrix” were probably inspired by sea lilies when creating their robotic guards. Yes, yes, people’s imagination is a very, very weak thing.

We, wanting to find extraterrestrial life, are trying to look for something that, to one degree or another, will be similar to life on Earth.

We, wanting to contact the “brothers in mind”, naively believe that they will use radio communications.

Yes, all this is irrational to some extent, but, unfortunately, we have no other way.

We, as a civilization that has rejected science for centuries, are only on the threshold of great discoveries, and we need to start somewhere.

The only thing available to us is earthly experience. Therefore, when trying to find alien life forms, we are guided by the knowledge that is at our disposal.

Probably, in 1000 years, our descendants, looking back, will laugh at our naivety, but it will be kind laughter, which adults have for stupid children.

Egyptian archaeologists have found the tomb of Pharaoh Teti

Egyptian archaeologists have found the tomb of Pharaoh Teti