The team of researchers used the Atacama Large Millimeter Wave Array (ALMA) to study the gases NaCl (table salt) and KCl (potassium chloride) in the atmosphere of Io, the innermost of Jupiter’s four large moons.

The harsh nature of Io

Io is continuously in “extreme conditions”: not only does it orbit very close to Jupiter, but it is also in orbital resonance with Europa and Ganymede, the planet’s other major moons; Io completes four revolutions around the gas giant in the time it takes for Europe to complete two revolutions and for Ganymede to complete one.

The tidal forces provided by this gravitational dance keep Europa warm enough to have a subsurface ocean of liquid water, but in the case of Io, these forces are so strong that the moon’s “innards” are red-hot magma.

The result of this interaction is that Io is the most volcanically active body in the solar system, on the surface of which there are at least 400 active volcanoes spewing streams of sulfur dioxide and gaseous impurities.

The authors of the study note that the temperature of the magma chamber affects the proportion of gases released.

Neither sodium chloride nor potassium chloride lingers in Io’s atmosphere for more than a few hours. By comparing the abundances of the two gases, the researchers estimated the temperature of eight eruptions between 2012 and 2018.

Direct measurements of atmospheric temperatures indicate a range between 227 and 727 degrees Celsius, but magma chambers must certainly be hotter.

The scientists found a higher ratio of potassium to sodium in volcanic plumes than in meteorites, suggesting that volcanoes emitted predominantly KCl.

This is consistent with the temperatures between the condensation points of the two gases: 900 and 1100 degrees, respectively.

The observed variations in the ratios indicate that Io’s magma chambers have different temperatures within this range.

Professor Jani Radebo of Brigham Young University has previously stated that Io can be compared to the young Earth, as it was during the historical period when life was born on it. 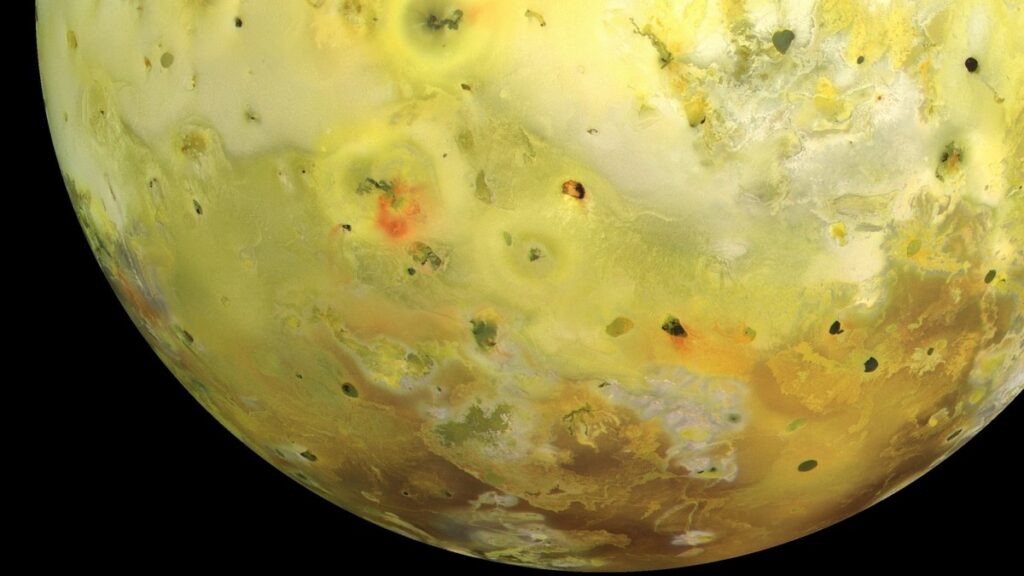 “This study confirms that the lavas erupting on Io are likely to have a predominantly basaltic composition, based on their temperature,” Radebaugh said.

This means that Io’s lavas likely have much in common with the seabed on Earth, as well as with the so-called “seas” of the Moon and rocks on Venus and Mars.

During the study, the authors discovered some other aspects of the volcanic satellite. For example, Io has a very thin atmosphere, composed mostly of sulfur dioxide (SO2), that requires sunlight to maintain.

Thus, when Io enters Jupiter’s shadow, some of the atmosphere is destroyed, only to be restored when Io returns to the light.

However, ALMA data indicate that the NaCl or KCl content does not change, suggesting that sunlight does not directly affect these gases. In addition, no indirect effect through sulfur concentration was found.

ALMA’s spatial resolution is so good that the research team was able to map the gases to specific areas of Io.

The peak density of SO2 has not always been observed in the same places as NaCl and KCl, suggesting that although these gases are of volcanic origin, they are not always released by the same volcanoes.