(ORDO NEWS) — Bronze Age people made a man-made oasis in the desert.

A group of scientists led by Essam Heggy (Essam Heggy) from the University of Southern California was looking for underground water sources in the Arabian Peninsula. The work was carried out within the framework of the project of the US Agency for International Development.

Based on data from the Japanese satellites ALSO and ALSO-2 , the researchers planned to map the alleged underground sources, so that they could then conduct surveys on the ground. But unexpectedly found no less interesting object.

On the territory of Qatar, scientists accidentally discovered a settlement that is at least 3,600 years old. Satellite data (mostly radar) showed a symmetrical area measuring two by three kilometers, on which, upon closer examination, traces of a settlement were also found. The results of the study are presented in a paper for the ISPRS Journal of Photogrammetry and Remote Sensing. 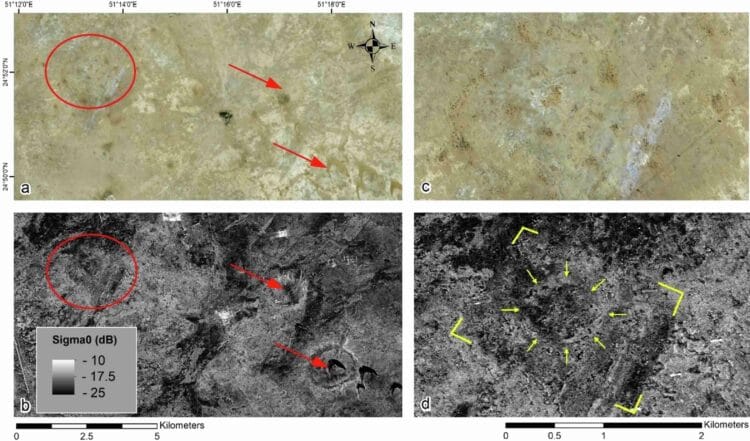 Although the settlement was not visible from space using visible satellite imagery, Japanese satellite radar equipment showed a large underground rectangular area that was determined to be man-made due to its shape and soil composition, which contrasted sharply with the surrounding geological features.

The site began to be explored in situ, and radiocarbon dating of the recovered charcoal samples gave an age of at least 3,650 years.

It should be noted that, according to modern ideas, in the Bronze Age, only nomads lived on the Arabian Peninsula (excluding the coast). There is some evidence of settled civilizations of an earlier period, but, firstly, they are very fragmentary, and secondly, they did not exist until the time of the Bronze Age.

Nomadism is generally a characteristic way of life for the inhabitants of extremely arid places, which the Arabian Peninsula has become with the end of the warm climatic optimum of the Holocene.

There are very few finds regarding long-term Bronze Age sites, and they were all temporary: perhaps at some point in time, climate change allowed them to stay in place a little longer than usual.

But the newly discovered settlement is not a temporary stop. People lived there for a long time and adapted the surrounding area for themselves. The authors of the work describe this place as “a natural fortress surrounded by very rugged terrain”, which makes the area almost inaccessible.

Scientists also suggest that the inhabitants of the settlement were able to find and use underground water sources. Without them, it would not be easy to exist in that area: the average air temperature in the summer months now reaches 43 degrees.

Full-fledged archaeological excavations are yet to be carried out (so far, as mentioned above, only coal samples have been taken for dating), but with the help of radar tools, it has already been established that the soil in the areas around has different characteristics compared to the surrounding landscape.

This happens when the remains of plants fall into one part of the soil, but not into another. Obviously, people used water for irrigation: that is, they did not settle on the site of an existing oasis, but created it themselves.

Perhaps before us – the first evidence of the existence of a settled community in the area. In addition, this find is a demonstration of advanced engineering for that time.

The researchers believe that people who had sufficient knowledge to use groundwater resources (after all, it was difficult to dig in hard limestone and dolomite) were undoubtedly ahead of their time in the fight against drought.

The paper provides evidence that the inhabitants of this settlement relied on deep water dredging, a method in which a person accesses water from deeper aquifers through cracks in the ground to use it to irrigate crops and sustain daily life.

We add that the settlement was located quite far from the coast, where civilizations of that period mainly arose. It is still difficult to say who the people who lived there were, where they came from and where they disappeared to.

Answers to these questions will be given to archaeologists. But it’s clear that the method used by Heggie and his colleagues could come in handy when looking for other human settlements and other arid climates.