(ORDO NEWS) — It’s a big day for the international scientific community as NASA released the second image captured by the James Webb Telescope, a groundbreaking development launched last year. We tell you why this device is remarkable and why scientists from all over the world are following its progress.

What is the James Webb Space Telescope?

James Webb is the newest orbiting observatory named after the NASA administrator who was responsible for preparing the legendary Apollo program.

The development of the device began back in the late 90s: then the engineers naively believed that they could complete the project and launch it into space somewhere by 2007, spending only $ 500,000,000.

But in reality, the enterprise turned out to be incredibly time-consuming and just as expensive – NASA employees completed work on the telescope only in 2016, while the enterprise’s budget grew to almost $10 billion.

However, the researchers believe that all monetary costs will easily pay for themselves during the operation of the apparatus. James Webb is intended to be the heir to the famous Hubble Space Telescope, launched back in 1990.

Since the universe is constantly expanding, the light emitted by distant stellar objects gradually shifts into a long wavelength spectrum. Hubble is not very well suited for such observations: with the exception of the ultraviolet lens, it is able to capture approximately the same images as the naked human eye.

“James Webb” works mainly in the infrared spectrum, and much wider than its predecessor. This should allow scientists to study in detail the process of the birth of new stars and trace the evolution of distant galaxies.

How is James Webb different from other telescopes?

First of all, a specific design. If Hubble looks like a large stationary telescope hovering in Earth orbit, then James Webb looks like a futuristic satellite dish mounted on a special platform.

This plate consists of eighteen mirrors, with the help of which the apparatus collects light. To be delivered to a working orbit, the complex had to be folded into a compact state: its full-fledged scan took a week. 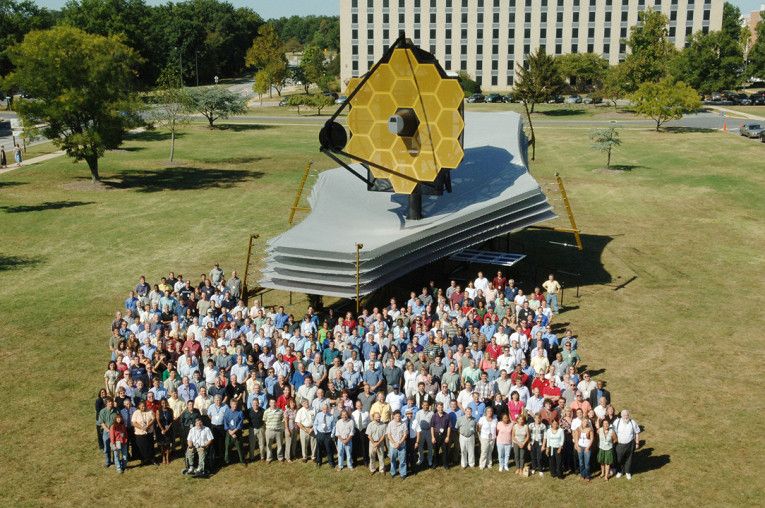 Another important difference between James Webb is the location of the telescope. Whereas Hubble is in Earth orbit, the James Webb Telescope operates in solar orbit, at the Lagrange point where the Earth and Sun’s gravitational forces balance each other.

This position allows the device to always keep both celestial bodies in the field of view. Due to the distant orbit, the observatory is able to capture better images of other galaxies, but there is one significant drawback: the large distance from the Earth makes regular maintenance impossible.

It was because of this that the whole world watched the sweep of the telescope so closely – if there were any serious problems, the whole program would go down the drain.

What is the status of “James Webb” at the moment?

According to NASA experts, so far everything is going according to plan. The telescope successfully entered the target orbit, corrected its own course and deployed the necessary equipment.

The program has already begun to bear fruit: US President Joe Biden solemnly unveiled a photograph of a cluster of galaxies called SMACS 0723.

NASA employees expect that the life of the James Webb will be 10 years. During this time, scientists hope to find traces of ancient stars that arose immediately after the Big Bang.