(ORDO NEWS) — The James Webb telescope once again looked deep into our galaxy and captured a pair of stars that form rings during their approach.

The world’s most powerful observatory has captured a star system that forms rings every time they get closer. The spacecraft image shows 17 such concentric dust rings.

The star pair, located at a distance of 50,000 light years from Earth, was named Wolf-Rayet 140. All the details about the unique star system are published in the journal Nature Astronomy. 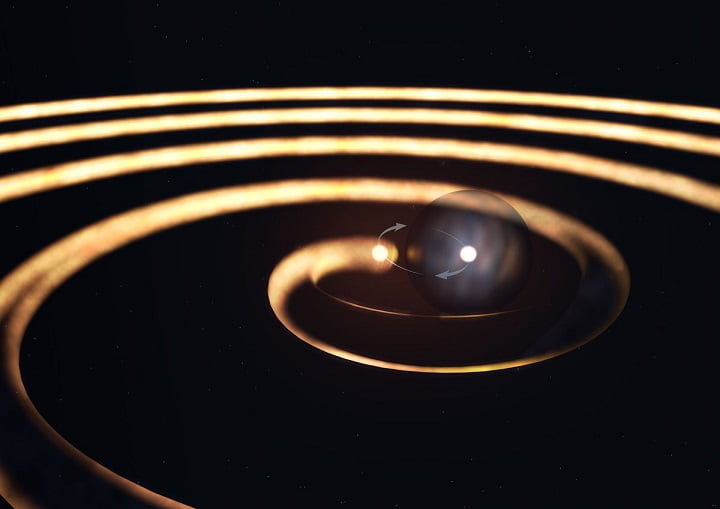 NASA has stated that the rings formed as the stars approached and their gas streams met. This stellar wind compresses the gas and creates dust.

The orbits of the stars bring them closer together about once every eight years. Like rings growing on a tree trunk, dust rings mark the passage of time.

“We have been observing more than a century of dust generation from this system.

The image also illustrates how sensitive the telescope used is.

We are now seeing at least 17 of them,” said astronomer Ryan Lau.

Astronomers used the mid-infrared instrument (MIRI), which detects shells around stars invisible to the human eye.

NASA says Wolf-Rayet is a star born with at least 25 times the mass of our Sun. It is nearing the end of its life, and is likely to collapse and form a black hole soon.

Astronomers speculate that the star in this particular pair may have lost more than half of its original mass.

“Because Wolf-Rayet stars lose so much mass, they also throw out more complex elements that are usually found deep inside the star.

Heavy elements cool as they fly into space and then shrink where the winds from both stars meet, like two hands kneading dough.

“Some other Wolf-Rayet systems produce dust, but none of them are known to form rings like Wolf-Rayet 140.

The unique annular pattern is formed because the Wolf-Rayet star in WR 140 has an elongated orbit, not a circular one.” , NASA said.

The research team also suspects that stellar winds may have also cleared the surrounding area of ​​residual material, which is why the rings are kept so intact.