(ORDO NEWS) — A new study has found that triangular cities experience the least rainfall compared to square or round cities.

The authors of the study believe that the interaction of the environment with the shape of the city can be taken into account when designing future urban spaces that should easily endure the effects of climate change.

Urban flooding is a growing concern as we experience more and more extreme weather events. Cities are particularly vulnerable to events such as flash floods, as vast expanses of concrete jungle have poor drainage.

A new research paper published in the Earth’s Journal examined whether the shape of a city can influence the weather. The authors decided to study the influence of shape, noting that some of Earth’s seemingly wetter cities, such as London, were also round.

Looking at round, square, and triangular cities (such as Dallas, New York, and Los Angeles, respectively), they compared the results of weather studies and forecasting and eddy models of airflow to see how shape can affect the weather. They also compared this to the city’s outer areas both inland and along the coastline.

The results showed that the effect of shape is more important in coastal cities, as the airflow from the city interacts with the sea breeze. Round cities had 78.6 percent more rainfall than triangular cities.

“Given that climate change will increase the risk of precipitation in the future, cities have spent huge resources on studying and implementing various infrastructures as adaptation strategies,” the authors of the study write.

“Our results highlight a poorly understood but important role of urban planning, especially in coastal areas.

The round shape of the city shows the potential risks of extreme rainfall and, as a result, the risk of flooding.”

However, the authors of the study note that the findings are not without limitations, and hope to address some of them by examining the effect of city shape under different wind conditions.

For now, they conclude that the study provides food for thought on how we can address some of the sustainability issues in developing our urban spaces.

The discovery is valuable for sustainable and sustainable urban planning, especially for those undergoing expansion.”

Europe will be covered by “bloody” rains

Most protected cities in the world

Europe will be covered by “bloody” rains

Most protected cities in the world 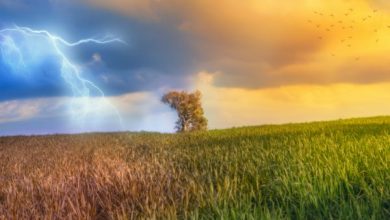